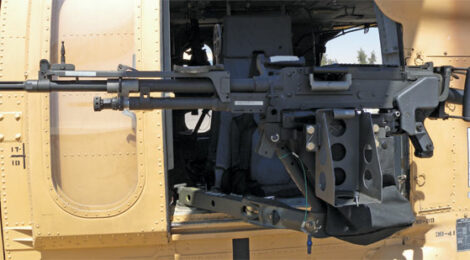 The conflicts in the Middle East go on, as they have through the ages.  The shores of the Hashemite Kingdom of Jordan look out over the salt-mineral flats towards the West Bank, as they have through the ages as well.  There is trouble brewing in that West Bank community, claimed to be the oldest continually occupied city on the planet, and to the East is Iraq, then Iran.  Looking north is the Syrian border.  Not far away, Saudi Arabia and Egypt.  This is the cradle of Western Civilization, the wellspring for the three great religions of the West – Christianity, Judaism, and Islam.  It is also the crucible that much of the conflict of the last several thousand years has been forged in.  SADJ was there for one of the best military/Special Operations shows in the world, in Amman, Jordan.

There are reasons that SOFEX is at the top of the list for those who attend military trade shows.  The primary one is that His Majesty, King Abdullah II Bin Al-Hussein, the Supreme Commander of the Jordanian Armed Forces, has “been there and done that.”  The King earned his rank and the respect of his men the old fashioned way, up through the ranks.  Although of royal birth and destined for the throne, the 43rd generational direct descendant of the Prophet Mohammed insisted on serving in many capacities of the military, and doing the training and service to gain the full experience he wanted.  Over the course of his life, he has worked his way up through various militaries, having served in the 13th/18th Battalion of the Royal Hussars (UK), gone through tank command training and the school of Foreign Service at Georgetown University in Washington, DC.  His career led him up through the ranks, commanding ever larger and more specialized units, until he reorganized the Special Forces in Jordan with other elite units to create the Special Operations Command.  The King is a qualified frogman, pilot, and free-fall parachutist, and like his late father King Hussein, he is an avid gun collector, who has kept his interest in all aspects of the Special Operations community.  It is his devotion to the martial world, and the Special Operations Command, that makes SOFEX such a special show.  The attention to detail is surpassed only by the quality of the exhibitors that travel from around the globe to be seen there.  SOFEX is a “Be there or be square” exhibition.

SOFEX 2010 was the eighth in the biennial series of conferences that has been sponsored in Jordan.  SOFEX has become the premier show for the Special Operations community in the Middle East, and the four day event attracts the latest innovators in small arms, as well as the cutting edge tactical groups from around the region and the world.  Small Arms Defense Journal was able to get behind the scenes with many of the events and manufacturers, and here are some highlights of the show.

SOFEX is held at the King Abdullah I Airbase near Amman, Jordan every two years.  The venue has over 70,000 square meters of indoor and outdoor exhibit space, with over 300 exhibitors and approximately 10,000 attendees.  There are many seminars on subjects related to Special Operations, as well as live demonstrations of many tactical operations.

SADJ is pleased to bring you some highlights from the exhibit hall, but we would also like to mentions several small arms related exhibitors that were at the show as well that include:

DT SRS Stealth Scout Desert Tactical Arms
(Not shown) While the DT SRS is offered in four calibers, my primary interest, and the interest of most who were looking, was in the .338 Lapua Magnum that is a box fed, bullpup style bolt action rifle.  The deployment kit for the SRS rifle was well thought out. www.deserttacticalarms.com

Institute of Metal Science  IMS High Tech
The Bulgarian IMS is heavily into mine and anti-mine work.  They have claymore equivalents, plastics, non-reactives, and a lot more.  The Anti-Helicopter series is extremely interesting and should be considered.  Take a look at the MPB-100 anti-transport mine: a directional mine that uses sensors to detect a target and can penetrate about 30mm from 75 meters away.  www.ims.bas.bg

Eurenco
Eurenco is supplying some very interesting RDX based malleable explosives.  HexoTube has a 20 year shelf life and is malleable up to several months after initial opening of the caulk tube container.  Their products have full markers, of course.  Hexotape is an RDX based malleable explosive, and Hexosheet is an RDX based sheet explosive.  One of their most interesting products is the Hexomax, which is a block plastic explosive, RDX based, that interchanges with block C4 but has better brisance.  This author was impressed with the plasticity number for -40 degree centigrade (approximately -40 degrees Fahrenheit).  This means it is still fairly malleable at extremely low temperatures, where most malleable explosive compounds are brittle.  www.eurenco.com 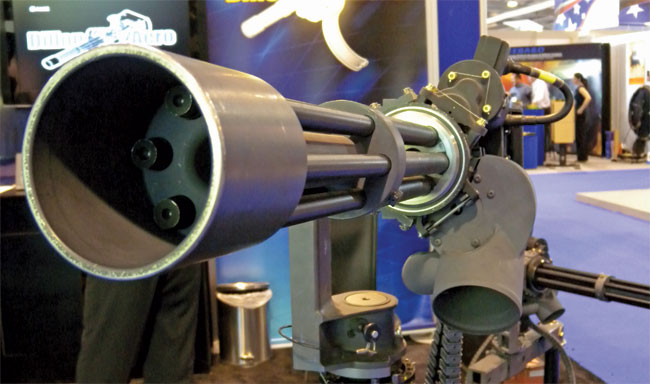 Dillon’s ever popular M134 D Minigun was on display. Jordan has purchased 12 of the Dillon guns and are reportedly planning on tripling that amount. (www.dillonaero.com) 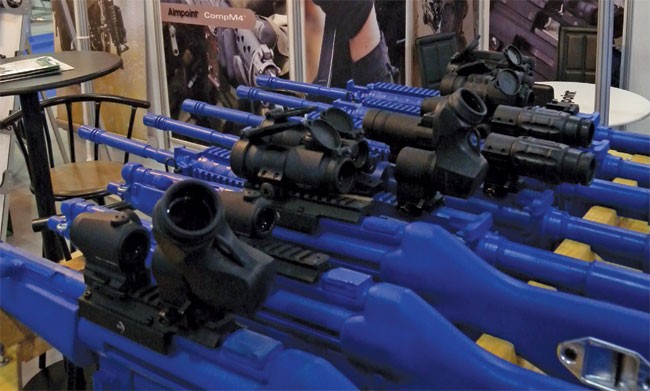 Aimpoint’s new military products were on display in a combined booth with LWRC. Two of the most popular items were on opposite ends of the spectrum - the “Micro” and the MPS3 crew served weapon sights. The CEU round-the-corner optic drew interest as well. In the photo, left to right: Mirco-T-1 with LRP Throw Lever and medium spacer; CEU “Concealed Engagement Unit”; Micro-T-1; Comp M2; Comp M4S; Comp M43. (www.aimpoint.com) 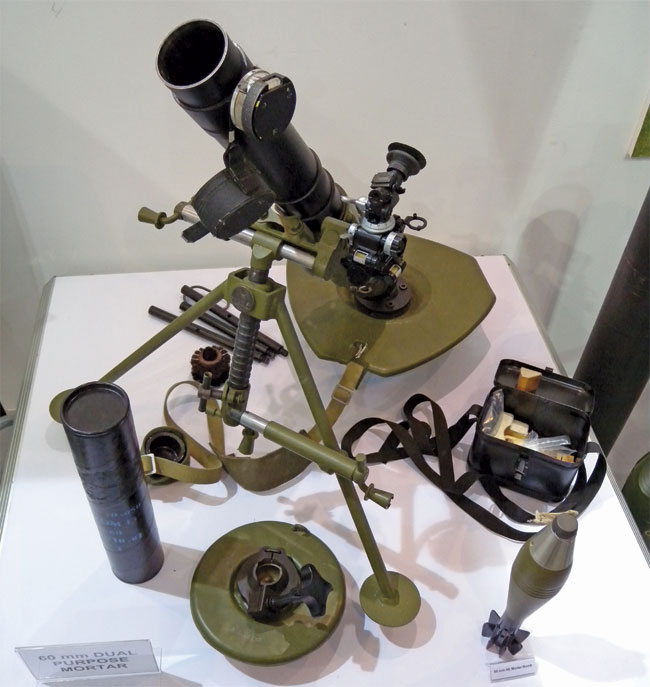 SADJ spent a lot of time with the Ministry of Defence Industry of Azerbaijan Republic, Modiar, and received invitations to come to their factories and test the equipment, so look for future features. Some highlights: they are in full production of RPG-7V2 launchers and the optics as well as anti-personnel OG-7 and practice rounds with expellers. They discussed their full production capability of the PKM and PKT machine guns, models UP-7.62 and tank machine guns. There were Azerbaijani sound suppressors for the AKM and the IST semiautomatic anti-material rifle is now made in 12.7x108mm as well as 14.5x114mm (The KPV round). Modiar’s ammunition production includes most small arms found in the region including blank cartridges, but the 9x19mm rubber bullets and the 7.62x39 low velocity bullet are of interest. There is a full listing of 23mm and 30x165mm ammunition as well as 30x29mm AGS17/30 ammunition including training rounds; VOG-25 type grenades and practice grenades, links and linking machines, 60mm, 82mm, and 120mm mortars and ammunition and 107mm multi barrel rocket launchers and rockets, as well as a small selection of mines. (www.mdi.gov.az)

QW-18 Manpad. This is an advancement on the QW-11 (Qian Wei) system, mostly in the method of heat-seeking on the targeted aircraft. The infrared seeker is more advanced than the 11, and it adds the factoring of surface temperature to the exhaust seeking dual band infrared unit.