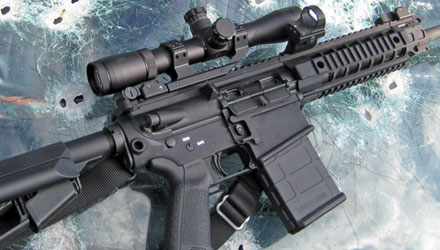 More than a general purpose rifle chambered in .308Win/7.62x51mm destined for rural LE departments; the 16-inch barrel SIG 716 Patrol should be considered for the full gamut of operations including urban deployments that can serve as an entry weapon, patrol rifle, or precision tactical option.

For a rifle to be considered versatile it must be able to satisfy multiple roles with equal aplomb.  A viable rifle candidate for this title is the SIG Sauer 716 Patrol chambered in .308Win/7.62x51mm.  The SIG 716 Patrol joins the growing number of AR style platforms chambered in .308Win/7.62x51mm.  .308Win/7.62x51mm potency in terms of ballistics and terminal effect makes it a favorite among U.S. troops and law enforcement personnel in more rural environments.  A quick look at the resurrection of the M14 and recent introduction of several AR-style rifle models joining ranks with the long standing AR-10 all support this observation.

The combining of the AR platform with the increased power represented in the 7.62x51mm cartridge is the key to the SIG 716 versatility.  This is speaking in terms of the SIG 716’s lethality and effective range, while still allowing for multiple rounds sent quickly down range if needed in a close range melee. In training courses experienced involving LE, military and private security contractors the mantra of “one mag one kill” is often repeated in relation to the M16/AR-15.  While the 5.56mm round is often chided in terms of lethality, the .308Win/7.62x51mm does not suffer from this reputation.

The above mentioned AR-10 is gas impingement in operation similar to Stoner’s original design intent.  Of late, the attention seems to be focused on “improving” the AR platform via developing piston-driven ARs in lieu of Stoner’s original gas-impingement design.  Whether or not piston-driven ARs are superior to their gas impingement brethren often generates heated discussion debating the pros and cons of each AR operating method.   The SIG Sauer 716 Patrol follows the short-stroke piston-driven path similar to SIG’s 516 5.56mm AR introduced a couple of years ago.

Firing from the prone position supported by a bipod produced consistent hits out to 300 yards on TacStrike 1/4 scale steel targets.

SIG Sauer will be offering various models of the SIG 716, including a 12-inch barreled SBR (short barrel rifle) version and Precision Marksman model with 20-inch barrel.  The SIG 716 Patrol has a 16-inch hammer forged barrel featuring 1:10 right hand twist with an A2-style flash hider.  It features a “flattop” receiver and offers finish options of either Flat Dark Earth or Olive Drab Green.  The SIG 716 Patrol evaluated herein features lower and upper receivers machined from 7075-T6 aircraft grade aluminum forgings coated with standard black anodized finish.  The chrome-lined hammer forged barrel is chambered in 7.62x51mm NATO with a Nitride finish.  The short-stroke push rod operating system with adjustable gas valve is the heart of the SIG 716 setting it apart from other AR designs.

SIG Sauer’s refinement of the AR design, and even other AR piston designs, consists of a 4-position gas valve that allows a user to adjust gas port settings.  Settings are normal, adverse, and suppressor use still allowing the action to cycle, but without the overpressure associated with suppressors.  The 4th setting totally cuts off gas from the action and maximizes suppressor efficiency by not allowing the action to cycle automatically.  The gas valve is adjustable by hand when clean, but takes a little more torque once several magazines are fired.  A bullet tip, or something similar like an empty case neck, is needed to rotate the gas valve between different settings once the SIG 716 has seen some use.  Normal (#1) is the gas valve straight vertically with adverse (#2) to the right looking at the rifle from the muzzle end.  The suppressor setting (#3) requires the detent to be pushed in with valve turned to the left of the normal (#1) position.  Gas off (#4) setting is further around left of the suppressor (#3) position with gas valve horizontal in orientation.

The SIG 716 Patrol rifle utilizes a self-regulating, short-stroke gas piston operating system, ensuring reliability in the harshest theaters of operation.  SIG literature points to several industry leading technological innovations incorporated in the 716 by seeking to engineer a complete solution to the deficits found in the direct impingement AR family of rifles.  The principal improvement comes from eliminating the venting of hot, carbon-laden gases into the receiver and bolt carrier group.  This reduces the cleaning requirements associated with the direct gas impingement AR.  It also means the bolt carrier group and associated springs are not subjected to the searing heat of the tapped gasses; this being one of the major causes of small parts failure.  The SIG 716’s four-position gas setting further ensures a user can adjust to changing environmental conditions; not to mention better employment of a suppressor if a mission dictates this.  The SIG 716 Patrol has several standard items incorporated in its design for better performance that shows attention to detail.  Ambidextrous magazine release buttons are a nice addition in terms of ergonomics.  This combined with proprietary SIG Sauer M1913 free floated quad rail design that is notched together at the receiver ensures accuracy will not be negatively affected by heat from extensive firing or “torque” applied from vertical forward grips or other accessories.  A further enhancement in this regard is the front sight placement on the gas block versus the free floated rail minimizing sights being impacted by heat or other factors associated with handrail shifting. The SIG 716 Patrol has several standard items incorporated in its design for better performance. Ambidextrous magazine release buttons are a nice addition in terms of ergonomics as well sling stud points located in three positions on each side of the rifle combined another location on the Magpul buttstock. This combined with proprietary SIG Sauer M1913 free floated quad rail design that is notched together at the receiver ensures accuracy will not be negatively affected by heat from extensive firing or torque applied from vertical forward grips or other accessories.

The free-floated forend rails allow for mission specific configuration with lights, lasers, target designators, and other items.  The 716 Patrol comes standard with folding BUIS open sights, Magpul pistol grip, and Magpul ACS collapsible rear stock and accepts Magpul PMag 20-round magazines.  One is shipped with the rifle.  Several more of the Magpul magazines were acquired for this evaluation.  Magpul’s PMag 20LR magazine is quickly becoming the standard .308Win/7.62x51mm AR magazine with several manufacturers setting up their lowers to utilize the Magpul product.  Quality magazines are a linchpin for a reliably functioning semiautomatic or select-fire weapon.  The 16-inch barrel SIG 716 weighs approximately 9 pounds and measures 39.75 inches with stock fully extended and 36.5 inches with stock collapsed.  The 16-inch barrel maximizes portability and handling while maintaining 7.62x51mm ballistics and terminal performance.  Potential law enforcement and security conscience civilians should consider the 16-inch barrel SIG 716 Patrol for their primary weapon.  This is due its power, accuracy, and multi-mission capability considering likely engagement distances – even in terms of precision shooting.  Concerns related to over penetration could be addressed with ammunition selection; the new Winchester PDX 1 Defender loading for the .308Win. featuring the SplitCore Technology 120gr bullet comes to mind.

In an effort to exploit the SIG 716 Patrol’s versatility, a Leupold Mk 4 2.5-8x was mounted.  A low power setting for quick target acquisition at close range, a turn of the knob to 8x for longer or precision shots as the mission dictates.  The flat-top receiver’s Picatinny rail allows for one of the sturdiest and versatile scope to rifle connections on the market.  Of course, other optics are possible in lieu of the Mark 4 Leupold, such as the Trijicon ACOG or Leupold Mk CQ/T.  Others could choose to go with a red dot optic in a strictly CQB role.  This limits what the SIG 716 Patrol offers in terms of power and effective range.   It is too easy to keep the Leupold Mk 4 in place and mount an offset mount bracket featuring a Leupold Deltapoint or similar pattern red dot offered by other manufacturers.  This allows a quick rotation of the rifle in the shoulder pocket a few degrees accessing the red dot optic with minimal effort or disturbance of handling.  Another option would be a quick release mount to remove the Leupold Mk 4 and deploy the excellent BUIS open sights if forced to move indoors before resorting back to mounting the magnified optic of choice.

Tags: 2012, 716, SIG SAUER Inc., Todd Burgreen, V4N3, Volume 4
← International Legal Affairs: Volume 4, Number 3
SHOT Show 2012 →
Distributed at trade shows worldwide, Small Arms Defense Journal is a bimonthly publication that focuses on small arms, accessories, gear for the soldier, new products, industry news, and defense trade shows. The first issue of SADJ was Spring 2009, which launched at the LAAD show in Rio de Janeiro, Brazil. SADJ (pronounced “sage”) is targeted toward military, law enforcement, and defense industry professionals. Our job is to reach these groups and tailor content to their interests while producing a publication that is applicable to an international audience.