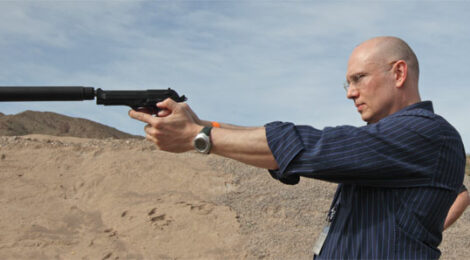 Each of the students had a chance to test-fire various weapons and suppressors on the range day of the class.

Affable, cheerful and humorous, the doctor appears to be a wonderful real-world example of Marcus Welby – except he carries a gun. His name is Dr. Phil Dater and it might have been his fascination with how things work that led the curious physician to first experiment with sound suppressors in the 1950s, and later in the basement workshop of a hospital where he worked.  Given his interest in firearms and his understanding of the scientific method – form a hypothesis, test it through repeatable experimentation and modify accordingly – Dr. Dater naturally took to sound suppressors and has been involved in many of the seminal sound suppressor companies in the modern era.  Of all the arcane areas of firearms, suppressors are the most firmly rooted in a “trial and error” design processes because no amount of computers can possibly calculate all the variables at work when a gunshot erupts.

Suppressors have intrigued me too, which is how I’ve come to be sitting in the front row of Dr. Dater’s two-day class on Suppressor History, Technology & Testing conducted at the GSA training contractor, Long Mountain Outfitters in Henderson, Nev.  The class is open to anyone, although Dr. Dater insists his students be vetted to assure no one of dubious motivation sneaks in.  His information is protected by ITAR regulations, so only DoS qualified foreign nationals can attend and Dr. Dater understandably prefers his competitors to not attend.

Our class consists of firearms engineers, enthusiasts who want to learn what they can; suppressor dealers who want to enhance their sales ability, and several U.S. government employees from various military branches.  Unbeknownst to me at the time, a celebrity is sitting in the back of the room, Pulitzer Prize winning author Stephen Hunter. 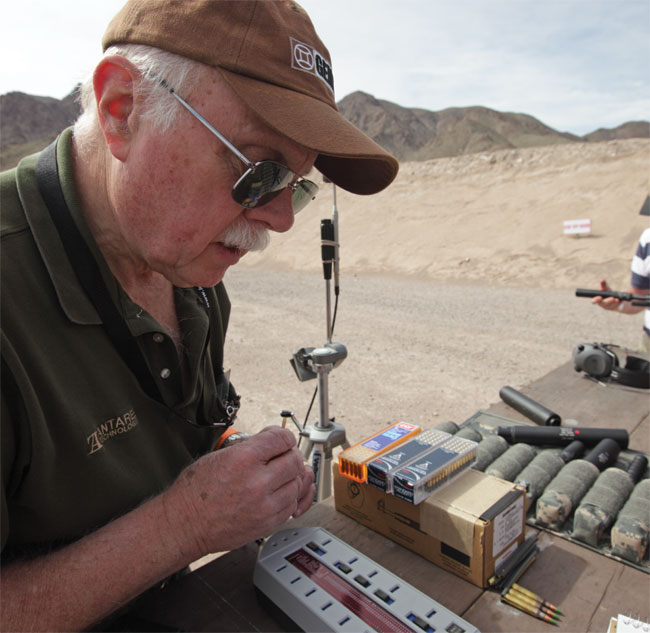 Dr. Dater makes a fine adjustment to his Larson-Davis 800B sound measuring instrument after having calibrated it with a known frequency from a special tuning device. Temperature, barometric pressure and altitude all affect sound measurements.

Dr. Dater displays an assortment of suppressors – “cans” in the vernacular – and immediately makes full disclosure that he’s one of the principals of Gemtech, a suppressor manufacturer.  He assures us that his class is non-brand-specific, but that he wants everyone to know he has an interest in Gemtech.  “I’ll try not to flog our product as this is not a sales presentation,” he says amiably.

Suppressor Background
Suppressors date to the turn of the century when Hiram Percy Maxim, son of the legendary machine gun inventor of the same name, started the Maxim Silent Firearms Company.  Our class later tests one of Hiram’s original cans and surprisingly performs right up with “modern” designs.

Dr. Dater mentions some other famous suppressor inventors such as Mitch Werbell, Mickey Finn, Reed Knight and Doug Olson, pointing out that all of their designs came from trial-and-error experimentation along with scientific and engineering principles.  It’s clear he has respect and admiration for these pioneers of silence.

We then jump right into the subject.  Dr. Dater explains the basic science of sound.  Sound is a form of over-pressure which is measured with a ratio of pressures – reference pressure to measured pressure – expressed in a unit of measure named for another well-known experimenter of sound transmittal: Alexander Graham Bell.  The unit is called a decibel.

A gunshot, Dr. Dater tells us, is the sudden release of hot, high pressure propellant gases exiting from the muzzle of a firearm.  A second component of a gunshot, the sonic crack, is caused by the bullet travelling faster than the speed of sound, like the sonic boom of a high-speed jet.

Going back to high school physics, Dr. Dater asks the class how to decrease pressure.  I brush back the fog of time and remember that pressure is equally affected by temperature and volume.  “That’s right,” says Dr. Dater, “If you lower the temperature and increase the volume, pressure decreases.  In its simplest form, that’s all a can does to reduce sound – decrease temperature, increase volume.” 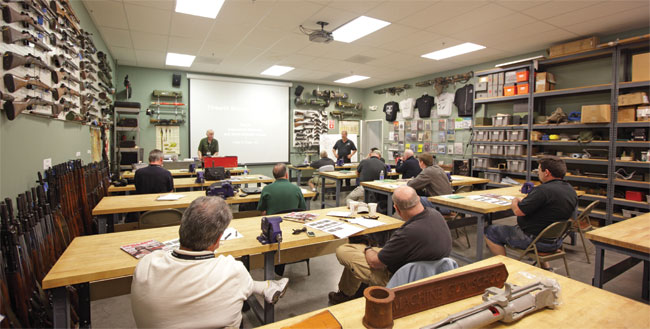 The classroom portion of the suppressor class was held in the headquarters of Long Mountain Outfitters in Henderson, Nevada. The gentleman at the rear of the room is best-selling author Stephen Hunter, creator of a series of Bob The Nailer novels that are renowned for their firearms and shooting accuracy.

Now comes the technical part.  Sound is not only a factor of loudness – decibels – but also of duration.  Think of tapping your car horn versus an ambulance blaring its siren.  The duration of the siren is more damaging than the short toot of a horn, even if they’re the same number of decibels.  This leads to a discussion of what constitutes “harmful” levels of sound, which in turn brings us to the U.S. military’s definition of sound measurement as defined in Mil-Std 147 4D.

We will hear a lot more about Mil-Std 147 4D before the class is over.  It’s the gold standard of suppressors, the only acceptable measurement of performance.  Because the scientific method of trial and error is so important to suppressor testing, having a defined standard like Mil-Std 147 4D is imperative.

Reasons for Suppressors
Thanks to Hollywood, suppressors are widely perceived as only being used by assassins.  It may be true that some cans have been used to snipe an enemy (we dropped suppressed .45 ACP rifles to the Resistance during World War II) but in today’s tactical climate, the suppressor has far more benign uses.

With law enforcement switching to patrol rifles such as Colt Commandos, the number one reason for a suppressor is to protect the shooter’s hearing.  Additionally, cans serve to enhance command-and-control, confuse or deceive the target, to shoot out street lights or guard dogs on drug raids, to conceal the origin of the shot, muzzle flash minimization and a host of other tactical reasons.

Or, better yet, make one at home.  Dr. Dater told the class about experiments with seized and home-made suppressors that he performed with properly calibrated sound equipment at the California Criminalists Institute.  First came the oil filter, nothing more than a common, everyday oil filter fitted to the end of a Ruger 10/22.  “That one worked pretty well,” Dr. Dater laughed.  “We got a 22 decibel reduction.”  He tried a sprinkler head with a wadded up piece of cloth inside, a 2 liter pop bottle, a tennis ball can of three balls and, the best of all, a potato.  “The potato worked really well, probably because of the high water content, but the bullet came out with what I’d guess was 30 degrees of yaw.  Very unstable,” Dr. Dater said.

Tags: 2010, Cameron Hopkins, Dr. Philip H. Dater, V2N4, Volume 2
← Eurosatory 2010
Guns & Gear of the U.S. Navy’s Riverine Forces (Part Two) →
Distributed at trade shows worldwide, Small Arms Defense Journal is a bimonthly publication that focuses on small arms, accessories, gear for the soldier, new products, industry news, and defense trade shows. The first issue of SADJ was Spring 2009, which launched at the LAAD show in Rio de Janeiro, Brazil. SADJ (pronounced “sage”) is targeted toward military, law enforcement, and defense industry professionals. Our job is to reach these groups and tailor content to their interests while producing a publication that is applicable to an international audience.