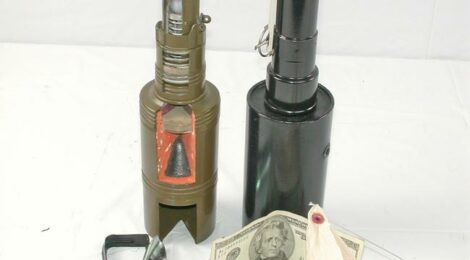 A lot of readers and deployed troops have asked us about the “Potato Masher” type hand thrown grenade that has been used in Iraq more and more frequently in the last several years.  U.S., British, and coalition forces have some good intel they are sharing, but at SADJ we decided to give you a closer look at these for your permanent files.  Readers are seeing this on the Internet, and the troops are seeing the flip side of these videos – coming at them. Most of these video clips are gathered from the Al-Jazeera network:
www.dailymotion.com/video/x7crpa_compilation-rkg3-in-iraq_news

What is being thrown at vehicles and emplaced barricades, usually in volleys of two or three, are variants of the old Soviet Era RKG-3 hand grenade.  This grenade system has a deserved reputation of being one of the world’s worst designs, but anyone on the receiving end knows that while this grenade uses a goofy looking “parachute” – a four sided drogue chute that is spring launched out of the top of the handle when the spoon flips off – it is none-the-less a hurled fragmentation and shaped charge that, in the copper-cone shaped charge “M” model, will penetrate a demonstrated 165mm of armor (125mm for the RKG-3).  The RKG-3 series of grenades has 567 grams minimum of TNT/RDX depending on the model, and a kill radius of about 20 meters.

Read that as, “One and a quarter pounds of High Explosive, with a shaped charge that will penetrate 6-1/2 inches of armor, and seriously frag you within fifty feet,” and it sounds more impressive. 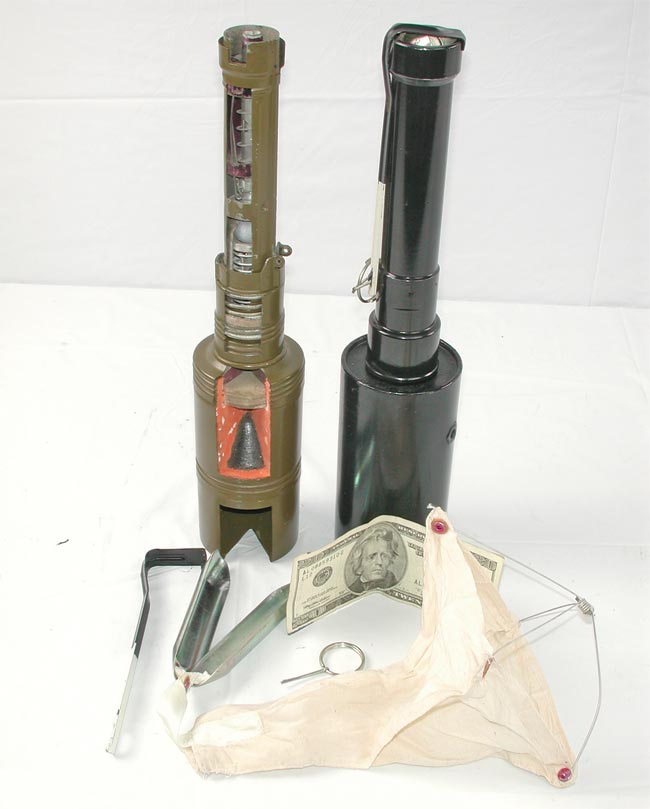 Considering that the basic US M67 “Baseball” grenade has about 185 grams (4/10ths of a pound) of RDX and no shaped charge, the RKG-3 series of grenades is a force multiplier for unsophisticated ground based insurgents.  It’s like having a mini-RPG-7 round to throw at vehicles.  The realistic range is under 25 meters: accurate hits are more likely at 15 meters.  The attackers conceal the grenades, move as close as possible, and they appear to hurl the grenades overhand like the old “Potato Masher” of World War II, expecting the drogue chute to stabilize the end-over-end spinning.  Since the fuze is an “all directional” fuze in the RKG-3 series, there will be a heck of a bang whether the shaped charge is properly directed into the armor or not.

The entire grenade weighs 1.07kg (2.36 lbs), and the Serbian (M79) and Bosnian (RKB-M79) made versions weigh just a bit more and claim a full 220mm (8.66 inches) of penetration.  The standoff needed for proper use of a shaped charge in this case is not a crushing cone like the RPG-7: the RKG-3 has an empty “tin can” towards the front to achieve proper standoff.  Once the pin is pulled and the “spoon” flipped off, the drogue chute is spring ejected out the top of the handle, while the fuze train is simultaneously started.  Air resistance on the chute stabilizes the grenade trajectory (theoretically, and with enough travel distance) and that plus the attached sheet metal clamshell pieces the chute is packed in, cause the final arming of the grenade.  From this point forward, whatever the grenade hits, will set it off, regardless of the direction of the shaped charge.

SADJ would like to suggest to our readers that they not underestimate the effects of the RKG-3 and its variants, regardless of what the Internet Commando community might say.  In the hands of insurgents who don’t mind getting close to the action, these are a definite threat and have wreaked some havoc on U.S., British, and Coalition Forces.  As an aside, these have also wreaked a little havoc on the indigenous grenadiers whom Mr. Darwin seemed to have selected for early removal from the gene pool, as a reward for getting too close to a fragmentation grenade that has such a large kill radius.

by Dan Shea on 17 August, 2011.
Tags: 2009, Dan Shea, V1N3, Volume 1
← The RPG-7 System Primer
Rocket vs. Recoilless →
Distributed at trade shows worldwide, Small Arms Defense Journal is a bimonthly publication that focuses on small arms, accessories, gear for the soldier, new products, industry news, and defense trade shows. The first issue of SADJ was Spring 2009, which launched at the LAAD show in Rio de Janeiro, Brazil. SADJ (pronounced “sage”) is targeted toward military, law enforcement, and defense industry professionals. Our job is to reach these groups and tailor content to their interests while producing a publication that is applicable to an international audience.