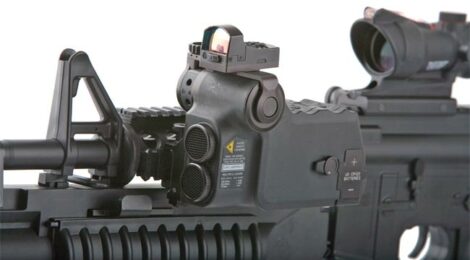 The RAAM may be the grenadier’s new best friend.  Weighing less than a pound, the ballistic computer will compensate for slope to the target position.  No longer need a grenadier worry about firing short when firing upwards.  Programmable for different types of ammunition, the RAAM utilizes two CR123 batteries, is night vision compatible, and mounts to either an M203 or M320 via standard Mil-Std 1913 Picatinny rails.

In an interesting development, the RAAM was selected by the British Ministry of Defense for the Future Integrated Soldier Technology Program.  Initial orders are reportedly 2,300 units for use within the British MoD.

Look for an in-depth review of the RAAM in a future issue.

by SADJ staff on 23 August, 2011.
Tags: 2010, RAAM, Rapid Acquisition Aiming Module, V2N1, Volume 2
← Industry News: Volume 2, Number 1
FAL/SA58 Mags (DS Arms) →
Distributed at trade shows worldwide, Small Arms Defense Journal is a bimonthly publication that focuses on small arms, accessories, gear for the soldier, new products, industry news, and defense trade shows. The first issue of SADJ was Spring 2009, which launched at the LAAD show in Rio de Janeiro, Brazil. SADJ (pronounced “sage”) is targeted toward military, law enforcement, and defense industry professionals. Our job is to reach these groups and tailor content to their interests while producing a publication that is applicable to an international audience.