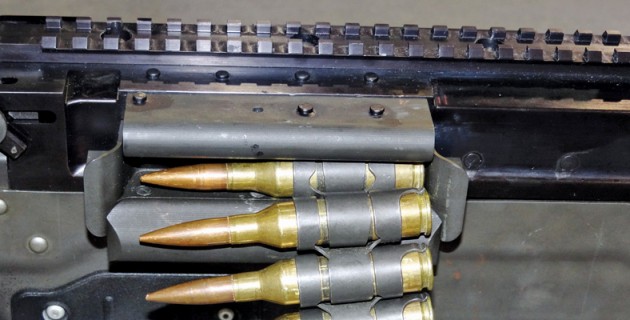 5.56mm is the ammunition of the infantrymen who have used it for the combat at short distance since the war in Vietnam.  Its current range for battlefield use is approximately 440 yards (400 m) and its performance improved with the introduction of the 5.56mm NATO whose SS 109 bullet made it possible to engage up to 650 yards (600 m).  For shooting up to 1,100 yards (1,000 m), sniper rifles and machine-guns in 7.62mm NATO are used.  This ammunition, temporarily forgotten, is again found to be useful because of the increase in ranges, particularly in Afghanistan.

When it is necessary to engage the enemy at longer distances up to 2,200 yards (2,000 m), .50 caliber sniper rifles or machine guns are the best, so many 12.7×99 rifles have now become available.  But if a high volume of fire is needed, it is necessary to use the .50 caliber M2HB machine gun.  Because of its weight, more than 90 pounds (50 kg), it cannot be easily carried by infantry and is generally mounted on a vehicle or helicopter.  Thus, the idea of an intermediate weapon, with a power between 7.62mm NATO and 12.7mm was born.  First .300 Winchester Magnum and .338 Lapua Magnum were used for snipers and recently a new calibre was developed into the system, the .338 Norma Magnum.

.338 Norma Magnum
This cartridge was initially a wildcat developed by Jimmy Sloan, an American shooter.  The case is slightly larger than the .338 Lapua Magnum, but shortened to 63.5mm (2.5 inches).  The concept was developed by Norma, which in collaboration with Ruag, developed an ammunition that followed an American Army program of June 2008 for a new sniper rifle cartridge intended to replace the 7.62×51(.308 Win), .300 Winchester Magnum and .338 Lapua Magnum for snipers.

With a shorter case than its competitors, the .338 Norma Magnum could be used in many models of existing weapons without it being necessary to develop special mechanisms.  The diameter of the body of the case is slightly greater than that of the .338 Lapua Magnum, which eliminates any confusion between the two rounds.  The basic loading uses a 300 grain (19.44 g) bullet, with a muzzle velocity of 2,648 fps (805 m/s).  The .338 Norma Magnum cartridge is C.I.P. approved and has been adopted by the American Army since February 2009.  Already several shooting or hunting carbines are available for this round including McMillan, Remington 700 and Remington MSR (Modular Sniper Rifle). LWMMG
To accompany Special Forces and to enable them to engage the enemy at long range, they reviewed machine guns firing the .338  Magnum levels of ammunition.  The LWMMG (Light Weight Medium Machine Gun) using the .338 Norma Magnum makes this possible.  The weapon was first shown on May 15, 2012 at the NDIA Joint Armaments Conference at Seattle and was also presented at the Eurosatory Show in Paris in June 2012.  It was developed by General Dynamics in Charlotte (North Carolina).  With a weight less than 25 pounds (11 kg), it can engage the enemy on any ground up to 1,860 yards (1,700 m) with a maximum range greater than 6,000 yards (5,600 m).

General organization of the gun is similar the MAG.  The telescopic stock is assembled to the back around a tube containing the shock absorber.  The frame is U-shaped.  The stamping is reinforced with machined steel elements assembled by rivets.  The cocking lever is positioned on the right.  The feeding mechanism is placed on the top with a cover that opens and closes for loading.  Cartridges are linked similar to the U.S. M13 link, but slightly larger.  They are introduced from the left side and the fired cases and the links are ejected on the right.

The interchangeable barrel is provided with a handle for handling and the muzzle has a flash hider.  The gas cylinder is located under the barrel.  A short handguard, provided with three Picatinny rails, surrounds the rear of the barrel and the gas cylinder and the mechanical or optical sights are mounted on Picatinny rail.  The ambidextrous safety is positioned in the top of the grip.  There is no selector.  This weapon works by gas, the bolt is locked by a rotating head.  It can be mounted on a bipod or an M192 tripod. Cartridges on links in the feedway.

American Special Forces could have at their disposal a suitable increase in firepower, but which requires a new type of ammunition, whose cost is probably very high.

Remembering other “9mm”
It is possible that the designers of the new ammunition and weapon probably think that they have created a new and innovative weapon and ammunition.  But the “9mm” machine gun is not an innovation.

In 1930s, France launched a program for a general-purpose machine-gun (infantry, tanks, anti-aircraft and aircraft) in various calibres (8mm, 9mm, 10mm, 11mm, 13.5mm and 14mm).  Several cartridges were developed, some of them only as drawings, but two of them were produced: the 9×66 and the 11×78.  Several machine guns for these cartridges were made by Chatellerault (MAC) and Saint-Etienne (MAS) small arms factories.

The “9mm” machine gun program was just about ready for tests when World War II began and it went no further.

Already, other manufacturers have announced new weapons in .338 Norma Magnum, particularly Castle Arms, Inc., which showed a general-purpose weapon called an MMGT, which seems to be a variation on an enlarged M60.