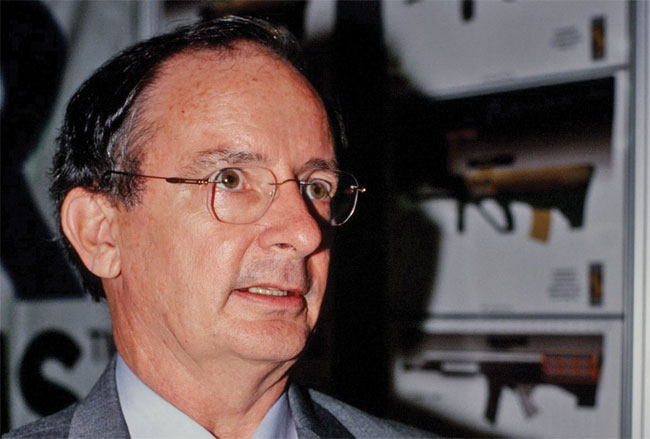 Downing recalled this troubling observation from his initial contact with the intensely focused O’Dwyer, who was making yet another in a seemingly endless string of impassioned but ultimately futile sales presentations in Australia and America.

But that quickly changed.  “After thirty minutes I realized that Mike had stumbled on probably the most revolutionary thing that could be done with firearms in about the last five hundred years,” Downing said.

The retired General, a legend in the Special Operations community, was so impressed with O’Dwyer’s radical invention that he accepted the top position at Metal Storm Limited, coming aboard in October 1999.  Over the next seven years, Downing’s reputation and contacts are said to have contributed substantially to multimillion dollar government contracts for further development of the technology in various novel applications.

Midnight Brain Storms
Going Ballistic, an Australian Broadcasting Corporation television documentary from 2000, has a collection of fascinating interviews with O’Dwyer himself and key persons in his life and work.

Through it we learn that the inventor admits to being “not a particularly good student” during his high school years in a small town in Queensland, Australia.  Interested primarily in the odd combination of physics at school and working on cars in his stepfather’s auto repair business, after graduation he chose to enter the workplace rather than continue on to college.

O’Dwyer’s personal and professional traits contributed to a quick rise to management level in retail and then in founding his own highly successful food wholesale company.  But his compulsion for invention would not relent and the products of inspiration when he would awaken suddenly in the middle of the night began to fill a bedside sketchbook.

His son Sean recalls pages upon pages of “engines and wings and carpets and electrical points… maybe 50 ideas.”

Passion for invention eventually overcame the need for comfort and security in the business world.  With the blessing of his wife Rhonda, O’Dwyer sold everything in 1991 and literally took a giant step into development of his amusing concept for running shoes cooled by forced air generated from each impact on the ground.

But breezy footwear would soon give way to a dream of fantastic firepower.

Mrs. O’Dwyer recalls the genesis of Metal Storm in 1993 as yet another of her eccentric spouse’s insomniac insights.  “He just woke up and he said ‘I’ve improved the gun.  I’ve got to go and put this on paper,’ and he doodled for an hour or so.”

The revolutionary concept at the heart of today’s Metal Storm technology has been described by its inventor as a modification of the common fireworks Roman Candle so that its projectiles may be initiated with computerized precision.

“To say that I was treated as though I was a friendly kook,” the inventor recalls, “would be a polite description of the response.”

Undaunted, O’Dwyer set off to America, only to experience months of futility being rebuffed by every possible contact in the Pentagon.  His luck didn’t change until after the system received a successful technical validation from a major US defense contractor.

This must have been what it took to convince Australia’s Defense Science and Technical Office (DSTO) to take a closer look, soon followed by significant funding and direct collaboration in hardware development.  In addition to facilitating a distinctive trio of Metal Storm weapons from pistol to cannon caliber, the partnership gave much-needed official gravitas.  Now, the “kook” inventor had the backing of serious scientists and engineers from his homeland’s defense establishment.

Blossom Point Demo
The reader is urged to access the MS website www.metalstorm.com and click the VIDEOS link.  Skip the latest postings for now and reach back to July 2000, when several of the mysterious new Metal Storm weapons were live fired for key military and government representatives at the Army Research Laboratory’s Blossom Point Facility in Maryland.

This extraordinary demonstration, a joint presentation by DSTO and Metal Storm, along with new US partner Science Applications International Corporation, was attended by a number of decision makers from DARPA, the American military’s Defense Advanced Research Projects Agency.  With deep pockets to bankroll cutting-edge technologies, DARPA’s backing was eagerly sought.

It’s likely that the fellow wearing a straw hat, fleetingly seen in the video, is O’Dwyer himself, cheerfully firing his VLe handgun and touching off a megafast burst from a bench test pepperbox containing six pistol caliber barrels.  This produces a devastating effect on a rack of target boards and then an oddly wired tube blows 40mm holes in a junk car.

While clear tactical applications for these lethal curiosities would not gain real acceptance until several years later, it should be evident to those who view this historic video that the “certifiably mad“ inventor was definitely on to something big.  DARPA’s emissaries apparently agreed and, in November 2000, entered into an unprecedented developmental agreement with DSTO, together committing some $50 million dollars.

This correspondent first met O’Dwyer in May of 2001 at the prestigious NDIA Small Arms Conference, where Metal Storm had a display booth and also presented a formal technical paper to influential US and Allied defense industry personnel.  Having elbowed through the crowd gathered to watch the heretofore little known firm’s dramatic video clips, we were approached by a slight and somewhat owlish fellow who introduced himself as Mike.

Turned out this was the modest but intense inventor, who proceeded to give our modest but intense magazine a personally guided tour of his visionary applications for the decidedly radical Metal Storm System.  Alas, Mike had no hardware on hand to fondle and no planned participation at the annual event’s customary live fire demonstrations.  So we politely listened, accepted colorful brochures and promised to stand by for further news.

Mike made sure we were on Metal Storm’s list for press releases and they began regularly arriving; product pages, as it were, for a growing catalog of delightfully intriguing weaponry.

We soon learned, for example, that techno-spooks at DARPA had awarded more than $10 million to Metal Storm for an “Advanced Sniper Rifle.”  No, the end result wasn’t fielded, but that doesn’t mean the program’s resulting data package for launching innovative projectiles at hypervelocity will not find practical application elsewhere and later.  It’s Metal Storm’s proprietary intellectual property that they just haven’t gotten around to yet for further development.

O’Dwyer continued to promote Metal Storm technology with missionary zeal, envisioning all manner of applications – not just military.  At the heart of its civilian potential was a versatile mortar box with specialized loadings.  These could be for precision fireworks displays, “sky typing” advertising messages, bombarding wildfires with suppressant chemicals, spreading pesticides and fertilizer, and mineral exploration seismology.

Nothing Personal, Just Business
While the scope of this article does not include details of the corporation’s complicated financial history, the wild ride for Metal Storm’s shareholders has been reliably reported over many years.  New applications and new government experimental contracts were periodically trumpeted in press releases and news features, but no real orders for hardware were forthcoming.  Investors, many of whom were regular folks of modest means, were justifiably unhappy.

Veteran insiders in the corporate structure are quick to credit O’Dwyer’s demonstrated genius and tireless promotional contributions.  But, we were told in carefully crafted statements, the time came when it was necessary for “the face of Metal Storm” to step aside.

A corporate press release from February 2005 announced Director O’Dwyer’s retirement with the bland assurance that “he will continue to provide consulting advice to the company from time to time in an informal, unpaid basis.”

The inventor/founder signed over “certain existing and future intellectual property rights,” and agreed to “certain non-competition arrangements.”  Then, in recognition of nearly two decades in building Metal Storm, O’Dwyer received a severance package of a half million Australian dollars (about $345,000 USD).

A gentleman to the end, James Michael O’Dwyer is quoted in the same release with a rather gracious parting shot.  There is much to be learned by those who carefully read it and consider all that has been reported in this feature:

“Over the past twelve months, Metal Storm has been assembling a skilled team of qualified engineers and associated professionals to concentrate on commercialization of the technology.  Now that the team is fully operational, I believe it is time to pass the baton to what is a new generation.  I am confident that under the leadership of David Smith, the team can complete the next stage of the company’s development,” O’Dwyer said.