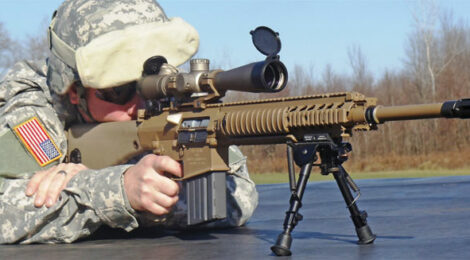 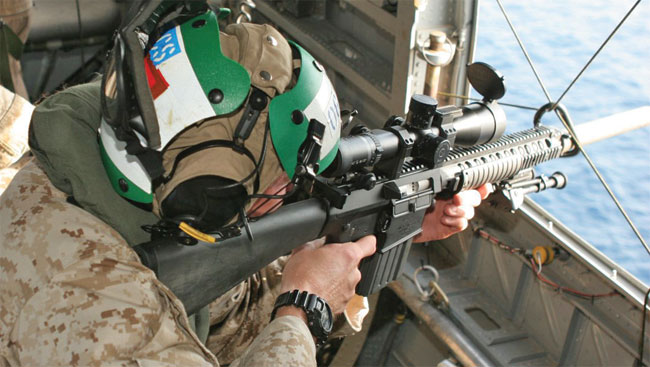 Marine sniper firing an Mk11 Mod 0 from a airplane over the ocean. The versatility of the Mk11 is night and day compared to the M40 and M24 bolt action sniper rifles.

Enter the M110 SASS (Semi Automatic Sniper System)
The success of the Mk11 was undeniable and spread to the other branches of the military – the sniper units in particular.  Seeing the benefits in September of 2005, Knight’s won the contract for the M110 SASS rifle.  The M110 was to replace the M24 bolt action sniper rifles in the U.S. Army.  The M110 trials had many submissions including ArmaLite, Remington and DPMS Panther Arms.  It would not be until April of 2008 that the M110 would see its first combat action with U.S. Army snipers from Task Force Fury in Afghanistan.  During the early M110 period, the Marines purchased 180 XM110 variants they designated Mk11 Mod 1 and then in 2010 ordered 803 M110 rifles.

The M110 has many similarities to the Mk11 Mod 0, however with many enhancements.  The stock on the M110 is adjustable for length with a dial on the rear allowing for the length to be increased or decreased as desired.  The stock has one moveable sling swivel mount on the bottom rear plus two QD mounts on the front of the stock on each side.  The receiver is manufactured from an aluminum forging and incorporates fully ambidextrous selector lever, bolt catch and magazine release.  A button right above the magazine catch on the right side of the receiver is the ambi-bolt release.  This allows the right handed shooter to release the bolt without his hand ever leaving the pistol grip.  On the left side of the receiver under the bolt catch is a button to release the magazine for a left handed shooter.  The trigger is Knight’s 2-stage match trigger, which is exceptional for a sniper rifle.

The upper receiver utilizes the new URX (Upper Receiver Extending) free floating rail with an integral folding front sight.  This saves space and makes for a dependable back-up sight.  The bottom of the handguard is removable for cleaning.  Quad Mil-Std 1913 rails allow attachment of any accessory imaginable.  The top rail is continuous for adding thermal, night vision and scopes.  The handguard comes with three KAC rail protectors that allow the rifle to be shot in a normal shooting position.  It is also equipped with a Harris Type S bipod.  The 20 inch Obermeyer heavy barrel has 5R grooves with a 1 turn in 11 inch twist that optimizes the 168 and 175gr match bullets of the M118 and M118LR ammunition.  The M110 barrel has an A2-style compensator attached to the end.  The pinned-on gas block has a Mil-Std 1913 rail on top of it.  The M110 is a self-regulated direct gas operated rifle.  The upper receiver is manufactured from a forging and now has an integrated fired cartridge case deflector.  Early rifles, due to the upper being made from an extrusion, had the fired cartridge case deflector attached to the rail as a separate piece.

The bolt carrier group follows in the tradition of the original AR-10 in that it is chrome plated making for ease of cleaning.  The bolt carrier has a captive firing pin retainer pin that prevents it from being lost during cleaning.  The bolt utilizes a 1-piece gas ring that is much more durable than the standard 3-ring set.  The extractor and, in particular the spring, have been enhanced since the inception of the rifle.

The M110 is packed with four 20-round and four 10-round magazines and pouches.  The M110 can also use the Magpul LMag as well. 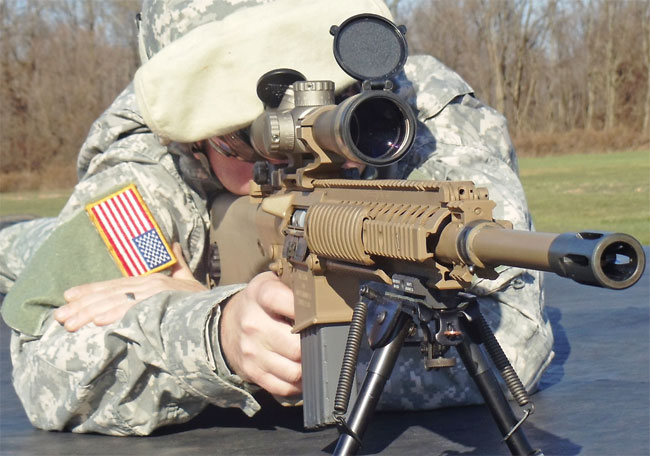 The optic used is the Leupold 3.5×10 Illuminated Reticle SASS scope with .5 MOA elevation clicks and 30mm SASS mount manufactured by Knight’s.  The shooter can adjust the brightness of the reticle to suit the lighting conditions he faces.  The scope is provided with lens covers.

The ammunition used in this test and evaluation firing was the M110 Silver State Armory (SSA) M118LR ammunition.  There were 200 rounds fired with the barrel being cleaned every 10 rounds.  The range was 100 meters and the rifle shot consistently sub-MOA.  The best group was 5 rounds in a 1/2 inch group.  The average was 3/4 inches.  This is accuracy of a match bolt action rifle.  Silver State Armory ammunition is match grade and they manufacture their own brass cartridge cases and blend their own powders to the particular load.  Additional rounds of the 168gr OTM ammunition were fired with the same results as the M118LR.

It this shooter’s opinion there is no bolt action rifle out there that can beat the M110 on accuracy, speed and firepower.  A sniper with a M110 can easily engage the same number of targets in less than half the time a well trained sniper can with a bolt action rifle.  The suppressor makes it that much better: less noise, less invitation to reveal your position and no affect on accuracy.  As expected, no malfunctions of any sort were encountered with the M110.

The M110 has a weight of 12.82 pounds equipped with iron sights, bipod adapter and scope.  With M118LR ammunition the muzzle velocity is 2,571 feet per second.  The overall length of the M110 is 40.5 inches with the stock at its shortest setting.  The sound suppressor only adds 1.62 pounds to the rifle.  The maximum effective range is 875 yards and is subjective to the skill of the shooter.

It is most unfortunate Gene Stoner did not live to see his AR-10 finally get into the U.S. inventory and equip the most elite snipers this world has ever known.  He was way ahead of everyone in the late 1950s; they just did not have the vision to see it.  Gene Stoner’s legacy has been the defense of this country and allies for nearly 50 years and being one of the most brilliant weapons designers of all time.  Thanks to Reed Knight, Stoners vision was realized, produced and reintroduced to the U.S. military.  Combining the genius of Gene Stoner with Knight’s technical and manufacturing abilities of KAC, the AR-10 will be with us for another 50 years.