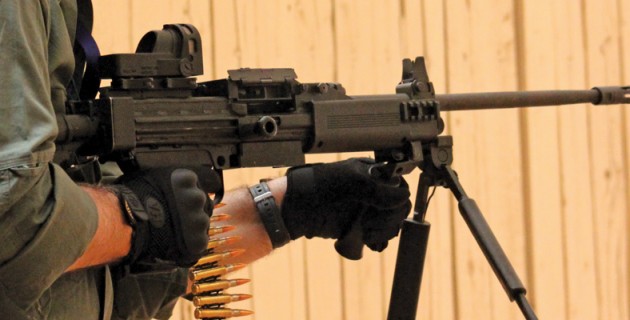 Israel since her birth always had two main needs: to be independent for her own weapons procurement and to maximize the efficiency of the troops deployed in the battlefield.  The NG7 is an answer for both these requirements, being completely developed and designed in Ramat Ha’Sharon by Israel Weapon Industries, with the same operation and handling of the Negev cal. 5.56 currently in service, and being the lightest LMG in 7.62 NATO caliber.

Presented in March 2012, it is the intention of Israel Weapon Industries (IWI) that the light machine gun (LMG) NG7 caliber 7.62 NATO will replace part of the Negev caliber 5.56×45 and part of the GPMG MAG 7.62×51 that are currently in use.

The design, as well as the action, the locking system and the operative system are clearly derived from those of the Negev 5.56 NATO, from which it inherits a good number of features.

The project, before going into production, faced an intensive period of field testing that the IDF nicknamed “ping-pong” that lasted about three years.  During this time several NG7 prototypes were issued to IDF combat units and returned to IWI with the related feedback.  Those feedbacks inevitably generated design modifications until a final version of the product, fully responding to specific Tsaha’l requirements, had been obtained.

The NG7 is equipped with an IWI ELOG system.  This electronically logs the real use of the weapon through a computer, allowing in turn the unit armorers to provide programmed maintenance according to real parameters and eventually to investigate any malfunction circumstances. Operating System
The NG7 is a light machine gun (LMG) operated by a gas system called “gas impact.”  The firearm starts the shooting cycle with the open bolt to avoid cook-off after prolonged fire.  When the trigger is pulled the bolt, that is locked in a full rear position, is released and starts to go forward pushed by two compressed recoil springs.  During its travel a cartridge is taken from the belt, chambered and the bolt, thanks to its locking lugs, engages the corresponding lugs in the barrel extension and locks.  The bolt carrier, in this phase, keeps going forward, exposing the firing pin that strikes the cartridge primer.  Upon discharge, the bullet goes through the barrel, pushed by the rapidly expanding gas, until one third of the barrel length is reached, where the gas port is located.  A portion of the gas vents through the hole and runs through a regulating valve and the gas cylinder until it hits a short piston that is integral to two operating rods linked to the bolt carrier.  The gases then push back the piston and, through the two parallel operating rods, the bolt carrier located in the upper part of this subassembly that, operating a cam, makes the bolt head to rotate and unlock.  The cartridge is extracted and ejected along with the link of the feeding belt and, during the rearward movement, the bolt carrier operates the belt feeding mechanism making it advance and putting a fresh cartridge in position to be chambered until it reaches the maximum rear position.  If the trigger is kept pulled, and the fire selector is on the full auto position, the cycle is repeated until the weapon runs out of ammunition or the trigger is released.

The NG7 can mount two different barrels, made by cold hammering process, of different lengths: one for the standard version 20-inch long (508 mm) barrel and one for the SF (Special Forces) version being 16.5 inches long (420 mm); both with 4 grooves right hand 1:12 inches (1 turn every 304.8 mm) rifling twist.  The chamber and bore are chrome lined to reduce barrel wear.  A 5 radial slot flashider is threaded on the muzzle and about one third of the total length there is the gas port block.  This component, mounted on the barrel by pressure and pinned, has three sub-components: gas regulator valve, gas cylinder and front sights.

The gas regulator valve, internally chrome lined to resist the high temperature of detonation gases, has only two positions instead of three, the assault rifle magazine feed option of the Negev in 5.56 is not present here: one for use in normal conditions and the other when the firearm is dirty, ensuring the correct operation of the gas system.  The front post-type sight, like the M16A1, is protected by two sturdy ears opened on the sides and adjustable both in elevation and windage to perform the mechanical zeroing.

A little before the cartridge chamber there is the carry handle that can be laterally folded and provided with a plastic grip for heat insulation.  It can also be used to remove the barrel when change is needed during a firing action. Feed tray, with the feed lever protruding from the central slot. Note the wall of the feed tray shaped to allow a smooth belt feed.

The barrel ends with a barrel extension provided in the upper part with the lugs for fast locking it to the breech block.  Internally it shows the locking lugs to accommodate the bolt and completed with the feed ramp to facilitate correct cartridge chambering.

The NG7 body is made by ribbed and stamped steel sheets and assembled to machined steel and welded blocks.  The metal folding process is obtained using a particular industrial stamping method in order to obtain the metal box that forms the weapon’s receiver accurately respecting the project dimensions with minimal tolerances.

We can divide the weapon body in three sections: front, central and railed.  The front section is a stamped steel cradle where is attached by means of screws the plastic front handguard.  On the sides of the handguard, front portion, there are two short Picatinny rails to mount electronic devices such as target designators or any other electronic/optronic device useful for the mission.  At the front end of the action is welded the first steel block, used as a front support for the barrel, which also holds the gas cylinder and the locking base for the weapon bipod.  Welded on the left side there is the swivel ring to hook one end of the assault sling.  The NG7 bipod is folded toward the muzzle, allowing the shooter to aim the weapon not only to the left and to the right, but also to rotate it on its longitudinal axis and to be adapted to any configuration of the supporting surface.  In the central section is another machined steel block, welded to the action metal sheet.  The block shows at the front side the locking lugs to lock the barrel.  The action of locking and unlocking the barrel is operated by a side button, on the right upper part of the action, just before the receiver cover.

When a barrel is inserted in place during a barrel change, the top locking lugs, thanks to inclined plans, move sidewards to the corresponding metal projections until the insertion is completed.  At this point the barrel catch button is operated by a spring and returns to the initial position locking the barrel in place.

A safety mechanism on the left side of the barrel catch button does not allow that it can be depressed if the receiver cover is not opened.  The bottom of the steel block is milled to allow the bolt group to move; the rail section starts from the central block and reaches the rear end of the action, were the stock begins.  This section takes its name from the two rails that guide the bolt group during its cyclic movement.  They are welded to the internal walls of the action to ensure the maximum precision for a smooth operation while firing. NG7 breech showing on the top of the barrel extension, the locking lugs to lock the barrel to the action.

On the right side of the rail section just behind the central block are two ejection ports: the upper one is for the links of the disintegrating ammunition belt, the lower one is for the spent cases.  Both are closed when carrying the weapon by two metallic lids to prevent dirt and debris from getting inside the machine gun’s mechanism.  Note that even being two different lids, they are articulated by a hinge.  When the lids are closed a little projection in the internal wall lower lid engages and locks to a notch in the bolt carrier.  When the bolt is armed and starts its rearward movement, the projection unlocks and, operated by springs, the two lids open and fold over the action.

The cocking knob is non-reciprocating and located on the right hand side.  Welded to the weapon is the related rail where the knob travels.  The cocking knob is provided with a ratchet safety mechanism to avoid accidental discharges of the gun if the cocking knob is not put in the full forward position after cocking the bolt.  The case ejector is internal, a pivoting type, located under the left bolt rail and operated by a suitable bolt carrier curve.

Different from its smaller “sister” in intermediate caliber, the NG7 does not have a magazine well for the assault rifle magazine nor the related lid to keep the dirt out.  This machine gun is belt fed only, from both a standard ammunition box or fabric and polymer drums with capacity of 100 or 125 7.62 NATO rounds, docked to the proper rail located in the lower part of the weapon body.  The absence of a magazine well opening allows the NG7 to take a great benefit in terms of action rigidity.