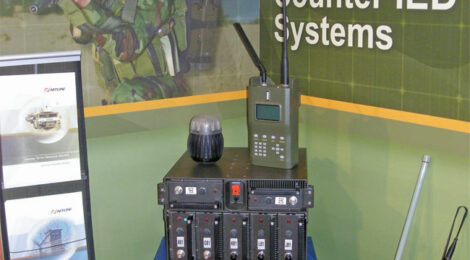 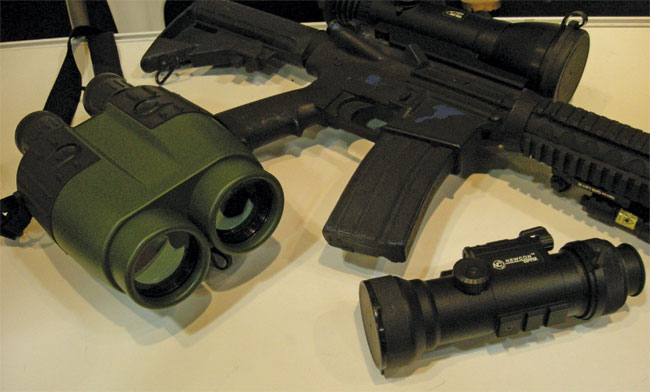 (Left) LRB6000CI 7x50 laser range finder by Newcon-Optik will give excellent identification up to 6 km. (Right) The NVS33 clip-on night vision mounts either forward of the regular optic on the front rail or it can screw in to the front. (www.newcon-optik.com)

This, the fifth in the series of ISDEF shows in Tel Aviv, shows tremendous growth.  The show has almost doubled from last year.  What started out as a show sponsored by large contractor, TAR Ideal Concepts Ltd., to gather their associates and customers together has turned into a small but increasingly world class event.  We booked SADJ in for next year’s show, of course.

ISDEF is the type of show that all attendees anticipate will continue to grow and attract serious customers.  While the younger IDF attendees might not be decision makers, yet, most long term defense contractors understand the “Yet” and work to educate them as to what products are available to solve future military problems.  This is not to say that the show wasn’t attracting higher level decision makers because they were certainly there in quantity.  There were many nationalities there as well and we noted representatives of the military from many European and South American nations, as well as Asian and Congolese, Ghanaians, and some Egyptians looking to coordinate more closely with the Israeli defense groups.

Scuttlebut was that the IDF is really dropping the .50 BMG (12.7×99) caliber rifle in favor of a .338 Lapua Magnum sniper rifle; the H-S Precision .338LM 2000 series Heavy Tactical Rifle (HTR).  This has been reported before as “fact” and was said to be a done deal, but this is the first time that all knowledgeable people we spoke with said it was a full-tilt change-out dropping the big fifties and that the .338s have been seen in action.  Apparently the IDF is keeping some old 7.62×51 rifles running as well: that would be the Knight SR25 and the M24.  IDF soldiers said to us that it “Just makes sense.  The .338 LM rifles don’t weigh too much more than 7.62 rifles and extend anti-personnel range out to a solid 1,200-1,400 meters with a good shooter.” 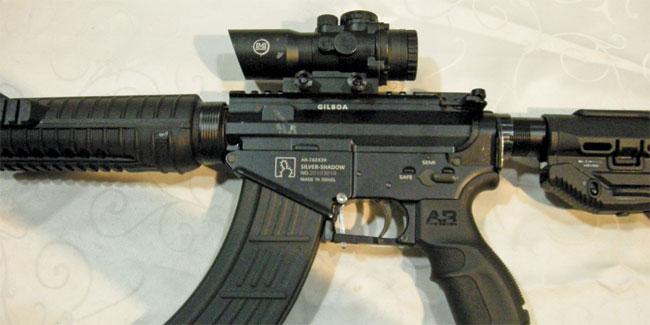 Silver Shadow
Gilboa rifles are from the Israeli company Silver Shadow.  This is the same group making the “Corner Shot” round-the-corner platform for handguns, short carbines and 40mm launchers.  The Corner Shot is now pretty well known.  Perhaps the most interesting information was that IMI’s weapons designer Efraim Yaari is now with the Firearms Laboratory Development group at Silver Shadow.  The two most important things in this writer’s opinion are their 7.62x39mm piston operated M16 clone with AK magazines, and the “APR.”

The APR is called the Assault Pistol Rifle, in 5.56x45mm using standard M16 mags.  It has a rail top, and the charging handle is moved to the left side of the upper and is easy to get to.  (Yes, the handle travels with the bolt carrier.)  The bolt carrier has been changed to a Negev or UltiMax type and the recoil assembly is behind the bolt carrier with a long spring and rod reaching to the front for a modified constant recoil performance.  Efraim insists it is smooth and they are getting zero carrier tilt even though the piston is above centerline by necessity.  There is a rail on the rear that allows for a quick attachment of side-folding buttstock, but the system can also be fired as a machine pistol.

On the 7.62x39mm M16 variant, this is a piston operated weapon, and a very natural design.  (www.silver-shadow.com) 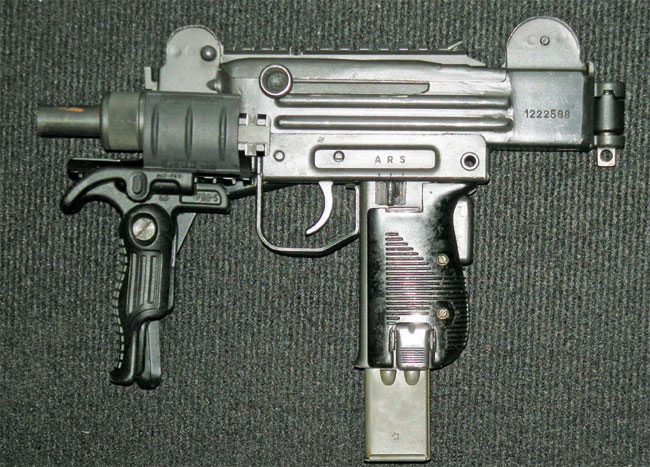 Zev Kaptowsky had a new product made from surplus Uzi SMGs. He called it the ‘Micro-Special’ and it was very, very popular with show attendees. Essentially, it is a micro-Uzi machine pistol with stock and top and front rails, with a front grip Zev says is very controllable. The new side cocking feature on the left side is a big plus. Other surplus items offered by Contact include the Galil SAR rifle in 5.56x45mm, Galil ARM rifle in 5.56x45mm, North Korean Type 68 AKM that Zev teases knowledgeable attendees with, U.S. M2 Carbine in .30 Carbine, an RPG-7 by Fateh in 1970, essentially a PLO RPG-7, Egyptian SAKR RPG-7 variant with Bulgarian furniture, and an M2 84mm Carl Gustav. (contct@netvision.net.il) 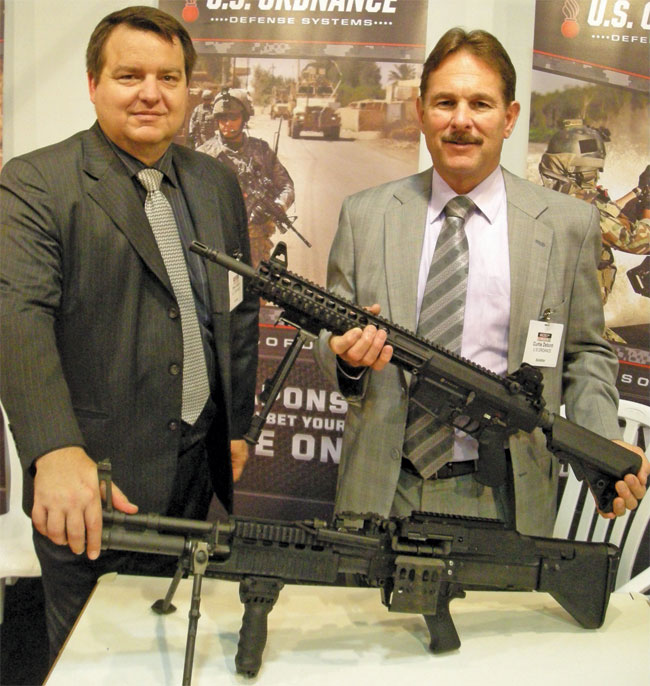 Steve Helzer and Curtis Debord from US Ordnance were at ISDEF and presented the US Ordnance QCB .50 BMG M2 they manufacture. In the picture, Curtis is holding the Lewis Machine Tool 7.62x51mm sniper rifle that has been adopted by the UK as the L129A1, and the US MK43 Mod 1 is on the table (M60E4). (www.usord.com) Netline Communications Technologies is an Israeli company that specializes in counter terror electronic warfare. There are two main lines they work with, Military, and Homeland Security. The basic solutions offered are RF Communications Jammers aimed at stopping IED RF communication/triggers. Applications of these units have also been made in prisons to jam cell phone communications, in countries where this is legal. Center on the pedestal: C-Guard VHP ECM which is vehicle mounted and can have up to ten plug-in packs to select jamming channels; lower right: C-Guard TXP ECM is a multi-channel portable (on wheels) unit that provides up to 100W TX power; center left: EWG- Electronic Warfare Grenade which can be tossed into a room to jam any RF trigger instruction while personnel are entering: Center right; JET Jamming Effectiveness Tester to be used to see coverage area; in photo; C-Guard ManPack that allows for multiple channels of jamming on backpack frame. (www.netline.co.il)

Koray Seyithanoglu from FLIR demonstrates the Thermosight ACTS (Advanced Combat Thermal Sight) on the M4 Carbine. ACTS will interface with an ACOG or other optic on the rail system. (www.flir.com) 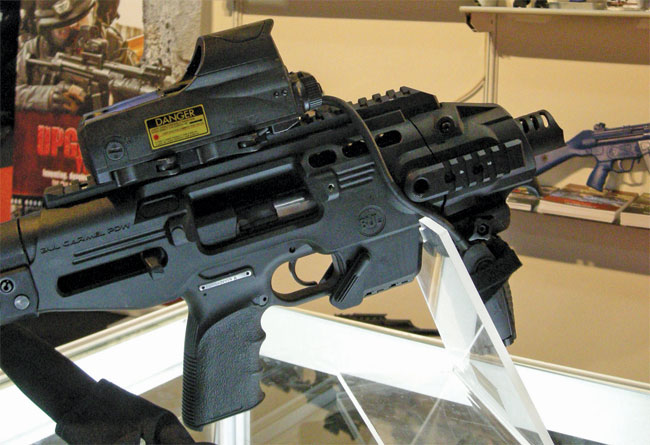 This well-known manufacturer of accessories and platforms for modern rifles is featuring the RONI Pistol-Carbine conversion unit shown in the photo with the Bul Carmel pistol converted to the PDW configuration. Their booth was constantly mobbed by IDF and Police personnel that were very pleased with the products. (www.caatactical.com) 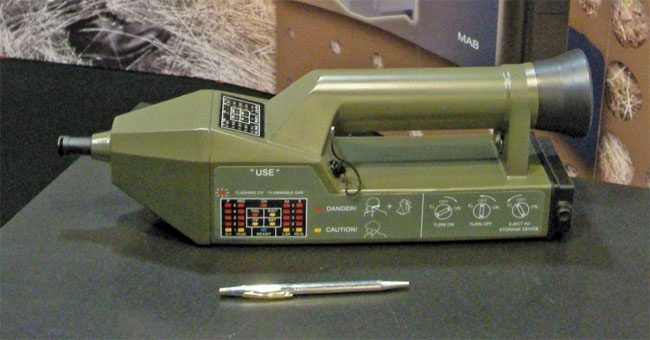 PROENGIN is a French company that makes a well respected line of products in nuclear, biological and chemical detection areas. The AP4C shown in the photo is the handheld chemical weapons detector in use in many parts of the world, including Israel. AP4C uses flame spectrophotometry to analyze the light spectrum emitted by any agents in the air that are burned by a hydrogen flame in its internal chamber. All known nerve agents, blister agents, and blood agents can be readily detected. (www.proengin.com) 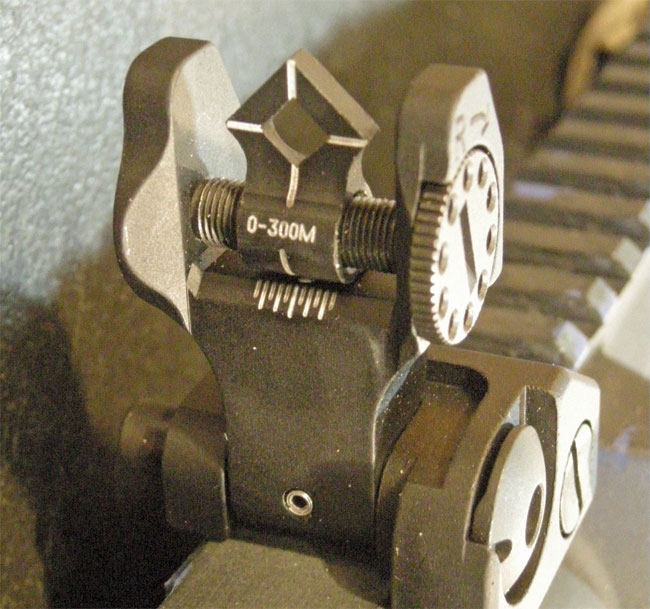 Troy Industries presented their EM203 Forward Assist forend for the M203 40x46mm grenade launcher. This is a very popular addition for grenadiers. They also announced a new chassis for the Ruger 10/22 rifle that uses a one-piece handguard. Shown is the Troy Dioptic (diamond shaped) rear sight that leads many shooters to a faster, cleaner sight acquisition. (troyind.com)