ABOVE: In another part of the Trust International Group’s booth, Jerry had placed the OOW HCAR in 30-06 caliber with suppressor. This rifle system, the final piece of the venerable 1918 BAR’s evolution, is quickly achieving legendary status as a long range rifle. Note the OOW 30 round magazines on the table.

The International Defence Exhibition and Conference (IDEX) of 2015 is a biannual show that reached its 12th anniversary with this event. It is a mature show with well developed habits and procedures for the exhibitors and attendees. Having established itself as a benchmark show much like Eurosatory, Milipol, DSA or AUSA, IDEX attracts a rich diversity of attendees from around the world. The show itself is centered in Abu Dhabi, the capital city of the United Arab Emirates. The UAE controls 9% of the world’s oil reserves, and 5% of the natural gas. As such, the UAE has a strong interest in their defense industry and tries very hard to stay modernized and up to the best technology in the region. Many Middle Eastern/Southwest Asian countries had their military in attendance, and the technology innovations were flying.

This year’s show was full to the brim with over 1100 exhibitors, and the “New Exhibitors” section in Hall 1 was also filled. More than 50,000 attendees roamed the halls, and there were exhibitors from over 50 countries. This shows growth from the 2013 show, but in any event this is a massive defense show. Being paired with NAVDEX gives both events a boost as well. 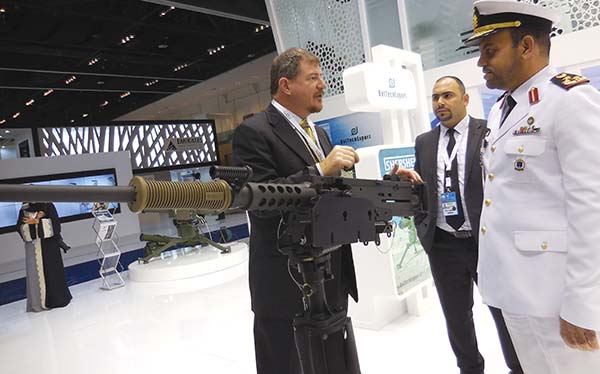 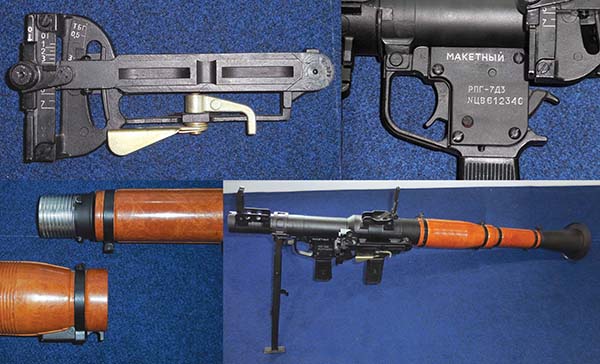 V.A. Degtyarev Plant’s RPG-7D3, the new variation of the paratrooper take-down RPG-7, was on display. It has an interesting “Iron” sight that mounts on the optic rail making aiming much more accurate without the complexity or higher profile/delicacy of the standard optic. They also displayed their KORD 12.7x108mm machine gun with rotating bolt and fixed barrel; their 6C-8 12.7x108mm bullpup style sniper rifle and 7.62x54R caliber machine gun “Pecheneg” with fixed barrel. (Not shown) www.zid.ru 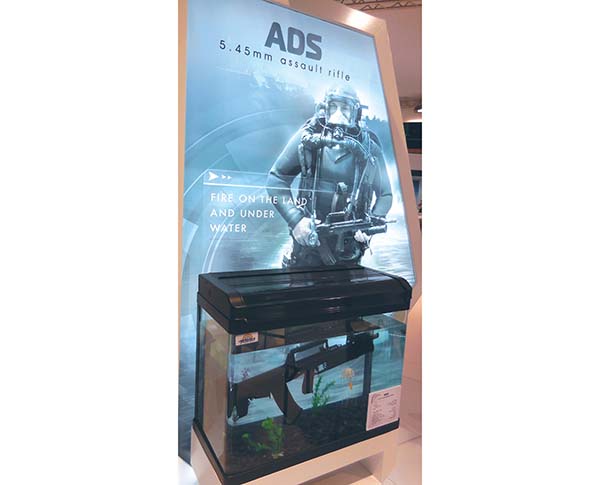 The fabled ADS underwater dual medium assault rifle was on display in its water tank, as has been recently seen on display. www.kpbtula.ru

SADJ requested it, and KBP Instrument & Design Bureau representatives removed it from the water tank to allow us to photograph the ADS. The ADS uses a special underwater cartridge (5.45x39mm PSP) that is dimensionally similar to the 5.45x39mm and the projectile has characteristics for underwater firing. The operator can transition to a standard 5.45x39mm cartridge when he changes mediums- coming out of the water into air. The VOG style underbarrel grenade launcher is not for underwater use. www.kpbtula.ru 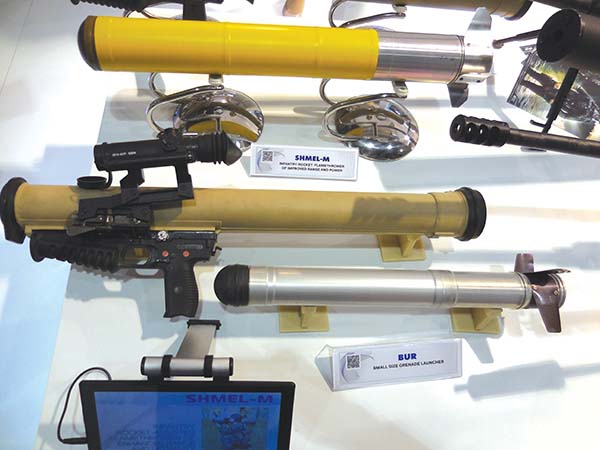 KBP Instrument & Design Bureau had a variety of shoulder fired weapons including the Shmel-M “Flamethrower” but what caught SADJ’s eye was the new “BUR” small sized grenade launcher. This shoulder fired weapon has a special fire control unit with optic that has the tube cassette with rocket replaced after each firing. This lowers costs, simplifies carrying multiple rounds, and ensures the FCU/Optic can be of a higher standard than throwaway type launchers while achieving an effective range of 650 meters. 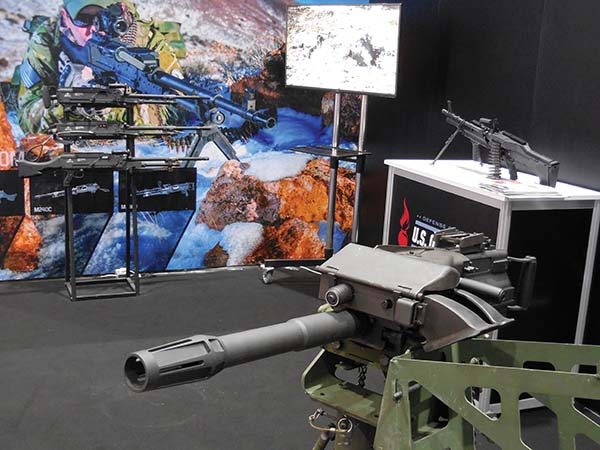 US Ordnance debuted their MK19 Mod 3 grenade machine gun in 40x53mm. The MK19 series is a standard in many of the NATO and other countries, and US Ordnance entering the marketplace with this is an excellent addition to the offerings from their company. US Ord is now well positioned in the world market to supply .50 caliber M2HB and M2A2, 7.62 caliber in both fixed and “Commando” styles with their M240 and M60E6, and the MK19 for new production or refurbishment programs. Watch SADJ for a full test report on the MK19 Mod 3 with upgrades as it comes on line. www.usord.com

UAE company Caracal had an exclusive booth position at the main entryway, and they filled the display areas with new products. One of the more intriguing offerings was the 7.62x51mm select fire assault rifle- perhaps better characterized as a Designated Marksman Rifle. www.caracal.ae 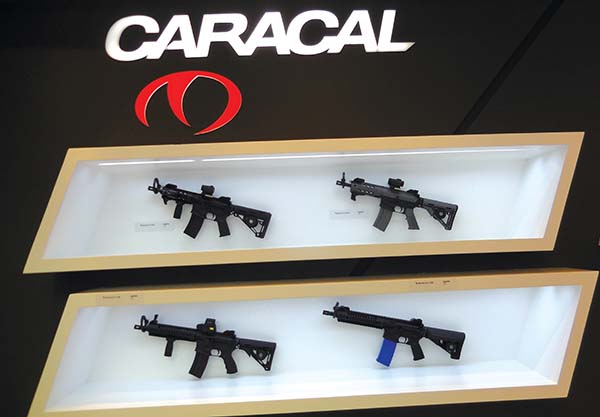 Caracal’s M16 variants cover a wide variety of models, all very well made, and the new 1911A1 pistol offering is a world class product www.caracal.ae 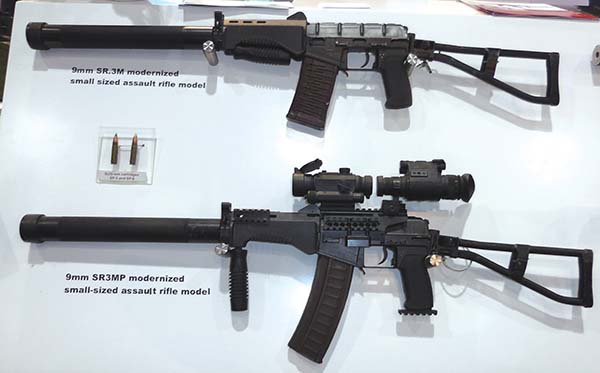 Tsniitochmash had a large display, many of the items were replicas but these two live variants- the SR.3M (Top) and the SR3MP (Bottom) are in 9x39mm with examples of the SP-5 AP and SP-6 sniper ball on display as well. www.tsniitochmash.ru 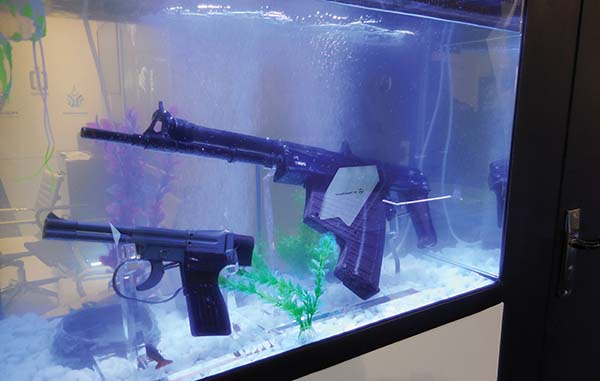 In their water tank, they had the 20+ year old technology for underwater firearms- the SPP 4 barreled pistol in 4.5x39mm, and the APS underwater submachine gun in 5.66x39 caliber. www.tsniitochmash.ru

Rheinmetall had a large, popular booth with their military products, but they had pulled out their innovative and seldom seen shoulder fired 40x53mm shoulder fired grenade launcher and put it on display. The extended magazine on it is evidence of the plan for extensive firing from the shoulder. Unfortunately, no engineer was present to explain the operation, and how the very potent recoil of the 40x53mm MK19 ammunition was to be mitigated so there were no broken shoulders. After much discussion about the laws of physics, possible counter-recoiling mechanisms etc, the salesman and this author eventually surmised that there might be “Magic” involved. Or, a really, really big spring. It is SADJ’s plan to meet with the engineers and explore the possibilities on this- a shoulder fired launcher that could hit at 1500 meters is something that the military groups have been wanting for years and we really, really want to speak with someone authoritative on this potential game-changer. ­­­ www.rheinmetall-defence.com/ 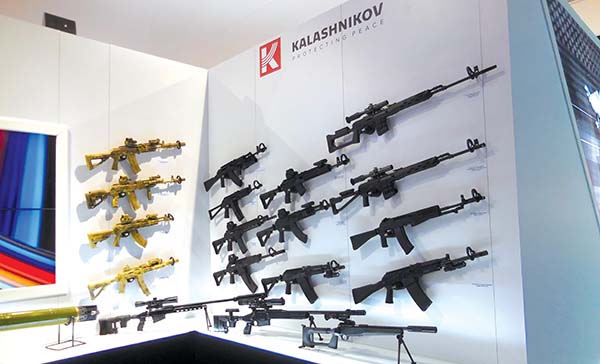 Kalashnikov Concern from Russia has a new motto: “Protecting Peace.” As exemplified by this wall of weapons, they’re preparing to help promote peace and protect it in many regions around the world. While there were sanctions for Americans on trying to buy any of these items, it didn’t prevent the salesmen from discussing the products. The AK107 is center top, and no new information could be had on that design. We tried to discuss the newest variant of the AEK-971 rifle, which is called the 6P67, and the rumor that it might be in a new 6mm caliber, but the salespeople were not allowed to discuss it. On a good note, we were able to get a good close look at the SVD-S sniper rifle with folding stock. http://kalashnikovconcern.ru/

Azerbaijan group MODIAR is working hard to reach the world market, and they are set up at many shows worldwide. SADJ was impressed with two of their sniper rifle offerings- both original to MODIAR. Their traditional offerings are also welcome due to low world supply, so their small arms ammunition is reaching the end users now. Ammunition belts, boxes, and blank cartridges are good market starters as well. Modiar is offering 30x29mm cartridges for the AGS-17-AGS-30 family of automatic grenade launchers, including training ammunition; VOG-25 series grenades for the front loading Soviet style under-barrel grenade launchers; and 60mm, 82mm, and 120mm mortar ammunition. The Azerbaijanis offered for SADJ to visit and test weapons, so as soon as we can arrange, we will bring you the reports. We’re especially looking forward to testing their 14.5x114mm long range sniper system. www.mdi.gov.az

Yirtici is a 7.62x54mm rifle, which uses tried and proven SVD Dragunov 10 round magazines to feed. The receiver is an unconventional sheet metal shroud, with sturdy barrel support underneath. The charging handle is ambidextrous and easily changed from right to left. Many experienced shooters who are right handed will switch to the center of receiver left-side charging, to avoid changing fire control grip on charging. (SADJ thinks this is a nice feature). The ambidextrous safety is a nice feature, and the location of the rail for the bipod is closer to center than many- offering the operator a much wider field of view.

Yalquzaq (Yalguzag) is a bolt action 7.62x51mm caliber rifle. Comparisons have been made to the B&T APR rifle, but while there may be some external or accessory similarities, Yalquzaq is truly a MODIAR design. The barrel is floated, threaded for a suppressor, and well supported in the machined receiver. Trigger pull was crisp and consistent. We look forward to testing this rifle. 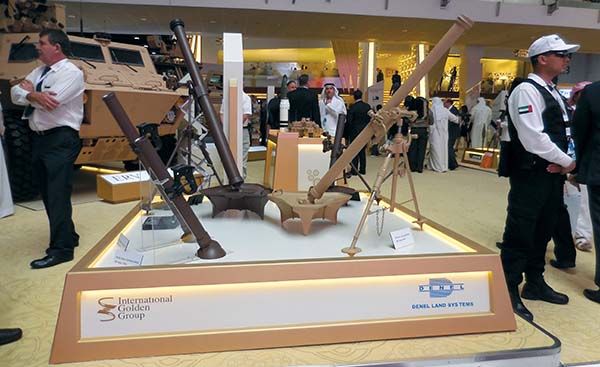 International Golden Group is an eight-year-old UAE company focused on the needs of the UAE military and police units, as well as regional sales. IGG has gathered together some of the finest defense manufacturers in the world to offer their products for sale. In this case, they’ve brought Denel from South Africa with a very interesting offering of long range 60mm and 81mm mortars. Extended range mortars are expanding the infantry support role, but more importantly, Denel’s special GPS wired fire control unit as shown on the 81mm had some impressive properties. www.iggroup.ae 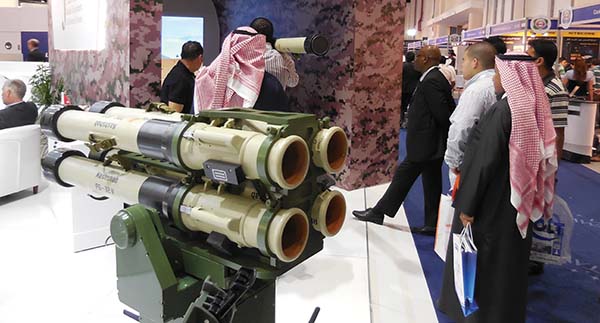 KADDB-The King Abdullah II Design & Development Bureau has been making a lot of headway with joint ventures in many areas of the military world. Two interesting projects shown at IDEX were the Hashim portable shoulder-launched Grenade system- this is essentially the RPG-32 reloadable launcher made as part of a joint venture in the name of JRESCO. In the photo shown, there are 4 of the Hashim on one mount. Second, was the Electric Drive Desert Ranger two wheel drive “Motorcycle” that is set up for combat reconnaissance and patrol. (Not shown) www.kaddb.mil.jo www.jresco.com 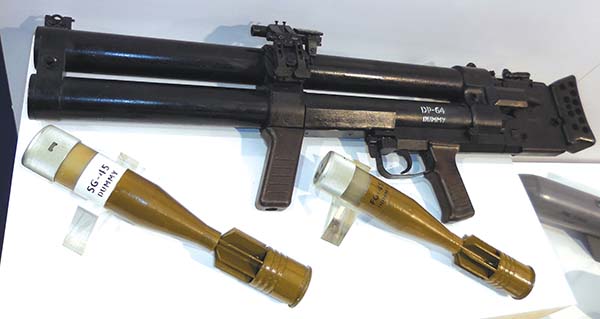 SPA Bazalt’s underwater 45mm grenade launcher- the DP-64. Don’t be mistaken on this, the double barreled DP-64 is not fired underwater- it uses grenades intended to be anti-diver. With a range of 400 meters, they are intended to be fired indirectly to the area where divers are considered to be a threat- and the grenades are depth triggered, not sensitive to the surface. The two main rounds, shown, are the SG-45 (Left) and FG-45 (Right). The FG-45 is a fragmentation grenade with an effective radius of about 14 meters, and the SG-45 is a floating red flare with a 50 second burn time. The UG-45 (Not shown) is an HE- Concussion grenade, functioning to about 40 meters depth like the FG-45 (Which also has concussion effect). www.Basalt.ru 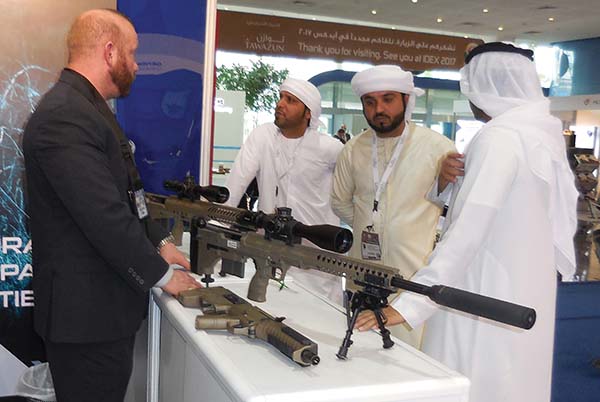 DesertTech had an excellent booth location with lots of foot traffic. This brought many military viewers of their DTA HTI (Hard Target Interdiction) sniper rifle available in .50 BMG, .416 Barrett, .375 and.408 Chey-Tac. The bullpup configuration HTI on the table is shown with the DTSS .338 sound suppressor. DTA has designed this system so that all calibers are capable of 2000+ yard engagements. www.deserttech.com