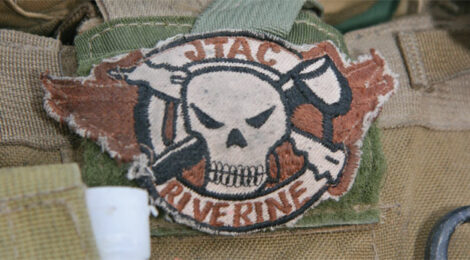 10 April 2009, Fort A.P. Hill, Virginia. A Riverine Patrol Boat executes a low speed turn in preparation for another pass in support of the Riverine Security Team that has gone ashore. Note the M240 and GAU-17 machine guns in the RPB’s forward mounts. (Robert Bruce)

Note: This article is a continuation of Guns & Gear of the U.S. Navy’s Riverine Forces, which originally appeared in Volume 2, Number 3 of SADJ.

The twelve men of a Riverine Security Team (RST) are the detachment’s landing force, Sailors who go ashore primarily for reconnaissance but also a variety of other “muddy boots missions.”  The team is often augmented by an Intelligence Specialist for information collection and a Hospital Corpsman for medical support.

New RSTs receive initial training in the same basic skill sets as boat crewmen, including Expeditionary Combat and Riverine Combat.  This is followed by several weeks of specialized Security Team instruction before assignment to a detachment.

After coming aboard, their Advanced Unit Level Training is heavy on mastery of individual weapons including fast transition from carbine to pistol.  They learn to effectively engage moving targets, provide supporting fire as a unit, fire and maneuver, and utilize signaling devices such as smoke grenades and pop flares.

Battle drills training consists of small unit maneuver tactics and patrolling formations, insertions and extractions both hot (under fire) and cold, as well as verbal and non-verbal communications with supporting watercraft.  AMOUT (Advanced Movement in Urban Terrain) is also emphasized where RSTs learn techniques for patrolling in villages and towns, how to conduct two and four man room entries, and defensive strong pointing of buildings.

RSTs are well armed with a variety of standard U.S. military small arms that allow a fast and furious response to situations both likely and unexpected.  As with Riverine boat crewmen, they carry both the 9mm Beretta M9 semiautomatic pistol and the 5.56mm Colt M4 series selective fire assault carbine.

There are six Riverines on each of the detachment’s two fire teams, consisting of a patrol leader, grenadier, machine gunner, and three riflemen.  Grenadiers have single shot 40mm M203 grenade launchers clamped under their M4s and the machine gunner is formidably armed with the 7.62mm belt-fed FN MK 48.  12 gauge Mossberg M500 pump shotguns are carried when needed for door breaching and room clearing.

Depending on the specific mission, a team member who has undergone additional specialized training in long range precision shooting with the powerful 7.62mm M14 rifle may perform as a Designated Marksman.  Additional duties for selected RSTs include Navigator, Communicator (radio operator) and JTAC (Joint Terminal Attack Controller) who skillfully directs the awesome firepower of attack aircraft or artillery. 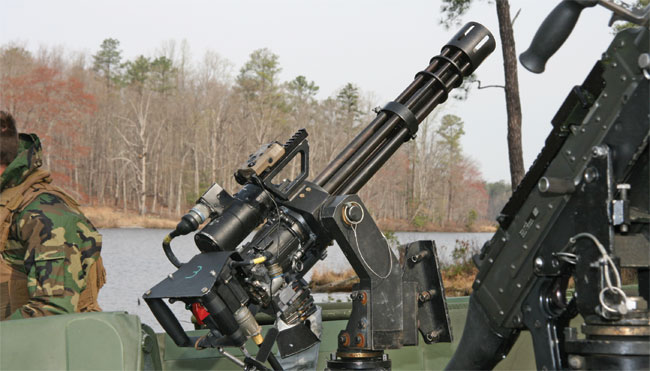 10 April 2009, Fort A.P. Hill, Virginia. A modern version of the classic Gatling Gun from the 1860s, this six barrel Minigun is ready to go with linked 7.62mm ammunition seen in the flexible feed chute and sturdy electrical cables for its drive motor plugged into the boat’s 24 volt DC system. Riverines we talked with had good things to say about the GAU-17’s reliability now that they are equipped with the Dillon Aero feeder-delinker. Note the AN/PEQ-15 ATPIAL laser mounted on top. (Robert Bruce)

RSTs also receive training on all of the boat-mounted crew served weapons so they will be able to effectively man the guns in the event a designated gunner is out of action.  They become proficient in the use of Combat Rubber Raiding Craft (Zodiacs) for stealthy waterborne insertions and extractions.  They provide impressive supplementary firepower to ground convoys as well as strengthening defense and security of the detachment‘s landside base of operations.

The Art and Science of Hot Extractions
A week after our first meeting we caught up with Det 1 at the U.S. Army’s Fort A. P. Hill, about 235 miles to the north of Lejeune and a conveniently short duration vehicle convoy just 75 miles northwest of the unit’s home base at Yorktown Naval Weapons Station, Virginia.  Yorktown-based defense contractor ITA International was advancing the detachment’s training evolution at Lejeune with some intensive practical exercises for the Riverines in live fire from multiple boats maneuvering at White’s Lake Tactical Raft Training Site.

Lieutenant (JG) William Ashley, Detachment 1’s serious but personable OIC, explained that ever since coming out of Iraq in December 2008, his unit has been in the post-deployment/pre-deployment training cycle, gearing up for its next assignment.

Now, building on extensive static landside shooting of crew served weapons and small arms, as well as preparatory weapons training while underway, it was time to move up to waterborne ops with boats moving and shooting in confined space.  White’s Lake multipurpose range, Ashley said, adequately supports some typical riverine fire and maneuver missions, in this case insertions and “hot extractions” of Riverine Security Teams. 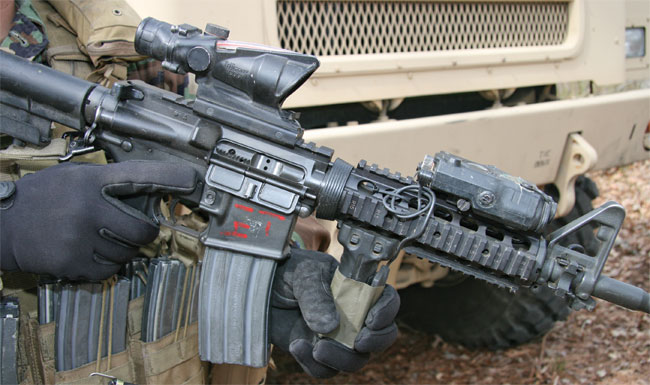 10 April 2009, Fort A.P. Hill, Virginia. Like most of these versatile carbines in the detachment, Lubrani’s flattop M4 carries a 4 power Trijicon ACOG day sight and PEQ-15 laser with pressure switch taped to a grip on the forearm rails. The ACOG gives excellent accuracy in day shooting and the infrared laser is spot-on for night use with PVS-14 NVGs. (Robert Bruce)

“They’ll be inserting an RST, about six guys, into the woods,” Ashley explained.  “They’ll be doing their maneuvers while the boats are shadowing them.  The RST will take (simulated) contact, start firing and make their way back towards the lakeside/river.  As they mark their flanks the boats will engage their contacts at the same time they’re moving in to extract the ground team.  And as they ‘exfil’ (exfiltrate) the area, they’ll be engaging the targets.  We’ll be doing that in several iterations with different crew swaps.”

Because each boat has two crews and the RST has two separate fire teams, there was plenty of time to observe preparations and conduct of this flexibly choreographed live fire training.  We also had time to interview an RST member under the watchful eye of Lieutenant (JG) Jeremy Baer, Assistant OIC of Det 1, RIVRON THREE.

Don’t Get Off The Boat?
John Paul “JP” Lubrani, Hull Technician 2 (EXW) is a native of Venice Beach, Los Angeles, CA.  He’s 31 years old with seven and a half years in the Navy, the last two in Detachment 1.  He started as a boat crewman and then began working with the RST while on deployment to Iraq.  JP said that he is one of the first to be dual qualified for both boat crew and RST, where he is the assistant JTAC (Joint Terminal Attack Controller) in training.  His awards include the Navy and Marine Corps Achievement Medal and the Expeditionary Warfare pin.

SADJ:  You were originally a gunner on a Riverine boat and then volunteered for RST.  Didn’t you see the movie Apocalypse Now and know not to get off the boat?

SADJ:  You joined the Navy soon after the terrorist attacks of 9-11-01.  Is this why you enlisted?

Lubrani:  I had a daughter and I wanted to join for her.  I didn’t want anyone else to fight my fight.  It was up to me.  I spent about five years in the LCAC (Landing Craft Air Cushion) community then asked for assignment to Riverine because it sounded like it was something above and beyond what I was currently doing.  I wanted to see if I could push myself to those limitations.

SADJ:  Has this assignment lived up to your expectations?

Lubrani:  Yes it has, 110 percent.  It’s physically demanding, mentally demanding, very challenging all around.  Every time you complete something they set a new standard, a new bar that you’ve got to try to achieve so we keep rising.

SADJ:  How are the living conditions in a Riverine unit?  No snack bar, you don’t get movies on the boat at night or a lot of hot chow.

Lubrani:  No we don’t.  Not big fans of MREs (Meals Ready to Eat) but we do eat ‘em quite a lot.  We keep ourselves entertained.  We have camaraderie and that goes a long way….  There’s a brotherhood in being a Riverine: we’re a very tight knit.  There’s roughly about three hundred of us in the squadron, broken down into three dets (detachments), about sixty people per det and a command element.  Within that det we’re very, very close.  Most of us know each others families, we get together quite often for barbecues, hanging out, birthday parties for our children, so it’s very tight knit. 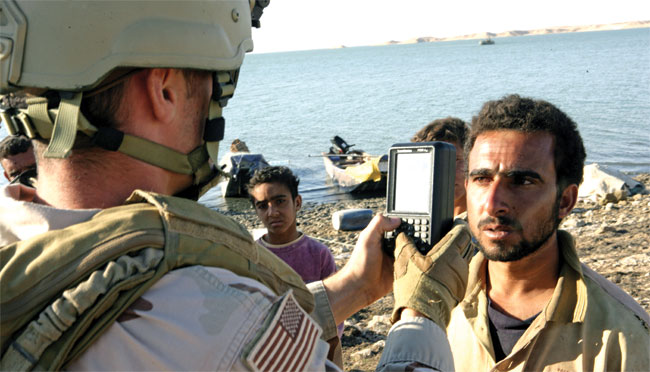 11 July 2008, Rawah, Iraq. US Navy Petty Officer 2nd Class Shawn Sass performs a biometrics scan on a fisherman the Riverine Security Team from RIVRON THREE encountered on the Watah Peninsula. The scan is unique to each individual and will be entered in a census database to improve security and deter insurgent activity. (U.S. Marine Corps photo by Cpl. Seth Maggard)

SADJ:  Are you personally interested in firearms and shooting?

Lubrani:  Absolutely.  But believe it or not coming from Los Angeles, I had never even held a weapon before I joined the military.  It made me nervous at first when you’ve got to do your qualifications.  But now, with the Riverines, I actually qualified as an Expert shooter with both the pistol and rifle so I think I’ve come a long way.  I’m a lot more comfortable around guns than when I first began.  They’re a necessity.  It’s a hard life out there sometime the way the world’s changing and I definitely think they’re a necessity.

Lubrani:  A Springfield XD in .40 S&W caliber.  I wanted something a little more than a nine mil.  My wife’s in the Navy as well and she’s used to the Beretta (M9).  When we went to the range I taught her how to use the Beretta very well but I wanted something just a little more powerful for home protection.  The XD’s a gun she felt comfortable with.  No other weapons.  We’ve got four children so money’s kind of tight.

SADJ:  What formal schools and subsequent training have you received for your duties on the RST?

Lubrani:  Our initial training was at Blackwater USA (security company in Moyoc, NC), a few weeks there that covered small arms, rifle, a little bit of CQB (Close Quarter Battle), and combat first aid.  Then we deployed to Iraq.  When we came back we went through another course at the Chesapeake Annex with land warfare and a little bit of land navigation, taught by ITA.

SADJ:  Do you believe you’ve had adequate training time?

Lubrani:  Absolutely, we spend a good portion of the year just training, not only in an environment like this (AP Hill) but also self sustained training.  We have qualified guys within our own detachment to run ranges and things like that and we’ve got plenty of ammunition.

SADJ:  How about computer simulators?

Lubrani:  We’ve used those at Camp Lejeune.  We all went through SOI (USMC School of Infantry) when the command was first established.

Lubrani:  Absolutely, we spend a lot of time training with NVGs (PVS-14 Monocular Night Vision Goggle) not only on the boats but on land as well.  The more we practice with them it helps because your depth perception is so much different (shallow) when you’re wearing ‘em.