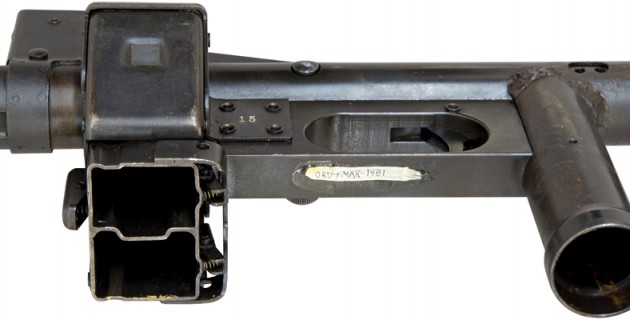 ABOVE: View from below. The front grip is hollow so that the weapon can be put on a bar-shaped mount.

Much has already been written about German military weapons. But still today some real treasures are left to be discovered. Some of them are re-discovered – like the Erma EMP44 of the Erfurter Maschinenfabrik (in short “Erma”).

When the 3rd U.S. Army under the command of General Patton reached the city of Erfurt on 12 April 1944, Berthold Geipel, the owner of the Erfurt Maschinenfabrik “Erma”, had already fled. On trucks packed with special-purpose machinery and construction documents, he and his companions were trying to slip out to Bavaria. What remained was collected by the Americans, just in time before the Russians later took control of this area. Along with other booty, a submachine gun with the designation “EMP44” was shipped to America. The weapon was briefly tested at the Aberdeen Proving Ground (Maryland), but due to the absence of technical refinements it evoked no interest and was soon put in storage. The Allies’ focus was on German assault rifle developments. Thus, the EMP44 was soon forgotten and it’s a small miracle that the weapon survived the scrapping-orgies of the postwar time.

The EMP44 is the result of attempts from the years 1942/1943 to create a much simpler submachine gun as the introduced MP40. At this time German weapons were still made in high quality. Other nations, however, much more early on put their focus on quantity instead of quality. The Russians introduced the PPSh-41, designed by Georgy Semenovich Shpagin, in December 1940. With its simple and uncomplicated receiver, bolt and wooden stock the weapon could be made in large quantities even in small workshops. For the completion of a PPSh-41 only 7.3 machine hours were estimated. In 1943 an even simpler weapon followed: the PPS-43. Developed by Alexei Ivanovich Sudajew, it was completely made of pressed sheet metal and its production time was only 2.7 machine hours.

The new hope in Germany was the assault rifle MP44 (later renamed Sturmgewehr 44). In 1943, Erma stopped the production of the MP40 in favor of the new assault rifle. The EMP44 was developed in the time before the switch of production. “EMP” means Erma Maschinen-Pistole. The weapon is mainly made of metal tubes welded together. The tubular receiver is extended by a sheet-metal barrel jacket of the same diameter that is riveted to its front. The jacket has four rows of four cooling slots and a laterally open muzzle brake. The trigger assembly is located in the middle of the gun between the magazine well and a vertical grip. Since the grip is hollow and not closed at its bottom, it is believed that it may have served as a mount on a bar-shaped gun carriage or installation in vehicles. At the rear end of the receiver, a nearly identical second grip is fixed. This one can be removed in order to disassemble the weapon for cleaning or repair. The sights rest high above the weapon on two bases and are protected by side plates. The rear sight consists of three leafs with a V-shaped notch for 100, 200 and 300 meters distance. Behind the rear sight base a deflector for the ejected empty cartridge cases is welded on top of the receiver. The rear grip closes the receiver’s end. It is held in place by a spring-loaded rod.

The bolt is designed in two parts. Its front half is very similar to the bolt of the well known MP40, but it contains a moving (and thus replaceable) firing pin. The other half of the bolt is made of a solid rectangular striking piece with a tip and a sheet-metal tube riveted to its rear end for stabilization. The cocking handle is inserted transversely in a bore in the front half. The tip of the striking piece reaches through an oval hole in the middle of the cocking handle.

The weapon is put on safe by pressing the cocking handle. Then it projects out on the opposite side of the bolt and engages in one of the two holes in the left side of the receiver. This can be done either in the cocked or uncocked position of the bolt. That way the cocking handle is fixed in position and the oval hole in the cocking handle prevents a forward movement of the striking piece. There are no additional safety devices on the EMP44. A carrying sling can be looped through a slot in the front sight base and a lug welded to the rear grip.

The bolt is designed in two parts. Its front half is similar to the bolt of the well known MP40. The rear half is made of a solid rectangular metal plate and acts as a striking piece. Note the oval hole in the middle of the cocking handle. Some parts are marked with the correct serial number 15. The cocking handle is from the weapon with serial number 8.

The disassembly and reassembly of the EMP44 is done as follows: Pull down the spring-loaded rod inside the rear grip and rotate it about 90 degrees. Now the grip can be removed and the receiver is open. First, the recoil spring can be pulled out. But before the bolt can be pulled out, the cocking handle must be removed. This is possible only at one particular position along the lateral opening in the receiver. Moreover, the striking piece must be pushed back with a finger so that its tip is no longer extended into the oval hole in the cocking handle. Otherwise, the cocking handle can not be pulled. After that process the receiver is tilted backwards and both parts of the bolt will slip free from the receiver tube. The assembly is again a tricky matter: First, the front part of the bolt is inserted, then the cocking handle is pushed into its correct place from the side and after that the rear half of the bolt is inserted. Since there are no guide rails, both parts of the bolt can rotate freely during insertion. For the most part, the little finger is needed to rotate the bolt parts to their proper position. Also, the right location for insertion of the cocking handle is hard to find along the lateral opening in the receiver because there are no markings. A lot of trial and error is necessary.

Markings on the EMP44. Note date of manufacture February 1943 and serial number 00015. The number 15 can also be found on other parts of the weapon.

Interestingly, a double magazine well of almost the same design was used on an MP40 variation called MP40/1. Only the complicated sheet metal dust cover was omitted. Of this weapon, a few pieces were produced by the Erma company in the period from late 1942 to early 1943. In contrast to the EMP44, that was specifically designed for this kind of magazine well, the MP40/1 was just a converted standard MP40. A large piece of metal was cut out of the receiver to make place for the double magazine well, but this weakened the weapon’s body. No additional reinforcement was added to the receiver to compensate the loss of stiffness. So in hard combat life the weapons would not work for long. When researching for this article the author noted that some of the still existing MP40/1s have slightly distorted receivers just caused by the long storage time. These weapons could no longer be cocked without using violence, since the bolts were jammed in the receivers in their front position.

The rear sight consists of three leafs with a V-shaped notch for 100, 200 and 300 meters distance. Note the safety by pushing in the cocking handle.

Nevertheless the MP40/1 is officially mentioned in the secret regulation D.97/1+ Geräteliste (list of equipment) of 1 July 1943 under the equipment number 1-3-3004, whereas the EMP44 is missing. All receivers of known MP40/1 came from the production of Erma and Steyr (Austria). Whether Steyr undertook modifications on its own or only supplied Erma with receivers is not known.

No information was found about the development of the EMP44. Certainly it was an attempt by the Erma company without any official order. Despite the designation E.M.P.44, the weapon was developed in the years 1942/1943. On one hand, emphasis was placed on a simplified design for easy production, but on the other hand some complicated features such as the moving dust cover or the two-piece bolt were created. Probably, the weapon was simply “too primitive” for the decision makers at that point of time and hope still rested on the new Sturmgewehr 44 assault rifle. Even in the later stages of the war, the design of the EMP44 was not taken up again. Today, only one weapon made in February 1943 with the serial number 00015 is known to exist in complete condition. It is part of the former Aberdeen Ordnance Museum collection that was moved to Fort Lee, Virginia as part of the Base Realignment and Closure Act of 2005. Unfortunately due to a budget shortfall the plans for building a new museum have been delayed indefinitely. For the moment, only a small new exhibition, “Subject to Recall: Collecting Intelligence,” showing captured items from enemy hands, represents the Ordnance Collection in rooms of the Quartermaster Museum. In the recent past the nonprofit organization “Ordnance Training and Heritage Center Foundation” was created by concerned members of the Ordnance Corps. Among its primary goals is raising funds to build a new Ordnance Museum. The muzzle with laterally open muzzle brake and large front sight base.