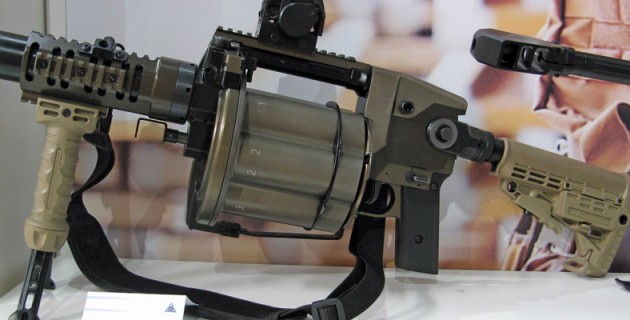 ABOVE: An interesting revolver grenade launcher RPG-40 in 40x46mm caliber came to Prague from Poland.

On October 17-19, 2012, the Future Soldier Exhibition & Conference (FSEC) took place at the Letňany exhibition centre in Prague.  It is a specific international event consisting of a military fair, a meeting of the highest level representatives of military and armament staff, and a professional conference on a specific topic – this year it was “Future of Cyber.”

As can be seen on their website (www.natoexhibition.org), the history of today’s FSEC goes back to 1985 when it started under the name of The Combat Clothing & Personal Equipment exhibition.  It took place in Prague for the first time in 2000; just one year after the Czech Republic joined the North Atlantic Treaty Organization.  Since 2008, the Czech Republic (and Prague) has been the only venue of this event.  Its name was changed to Future Soldier (FS) the same year.  In 2012, the name was extended to Future Soldier Exhibition & Conference.  FS and FSEC are held every two years and in autumn 2012 this series of military fairs celebrated its 10th anniversary.

This was the first time this author had visited this exhibition.  Until now, many colleagues had expressed that the Future Soldier fairs offered little to journalists focusing on small arms.  Additionally, this event has never really been taken as a good starting point for the presentation of new products, especially in the small arms field, with one possible exception – in 2008 the Future Soldier exhibition was the first place where the public could see the new Czech CZ 805 assault rifle.  This time, in the autumn of 2012, I was kindly invited by some friends from one of the Czech companies and was interested how the Army of the Czech Republic was going to present its new weaponry.

In short, for the small arms professionals and enthusiasts, FSEC is really no scoop.  On the other hand, the 10th anniversary of this event offered several interesting exhibits that deserve to be mentioned.  What follows is my selection of the highlights in the field of the small arms at the FSEC 2012. The CZ 805 Bren assault rifle with the suspended grenade launcher CZ 805 G1 was also presented on the project LAFETA – an experimental sample of the wireless operated miniature carriage for small arms, which was developed by the Department of Military Management and Tactics of the University of Defence in Brno in cooperation with the company VOP CZ. This was the only CZ 805 BREN assault rifle at the exhibition that still had the original non-telescopic stock from the first stage of deliveries to the Czech Armed Forces. Bumar also presented its sniper rifle Alex-338 in .338 Lapua Magnum. Despite the growing importance of the highly precise small arm on the modern battlefield, this was surprisingly the only sniper weapon at FSEC 2012. At FSEC 2012, small arms were also presented by the Polish concern Bumar. Maybe the most interesting was the project of the new Polish army pistol of the arms company in Radom and Military Technical Academy in Warsaw. As we could see in Letňany, there are at least two designs of this interesting handgun with the two-piece polymer frame – one, presented during 2012, has an original rail on the top of the slide (whose shape resembles the slide of the Czech CZ P-07 Duty pistol), while the second has the conventional shape of the slide.