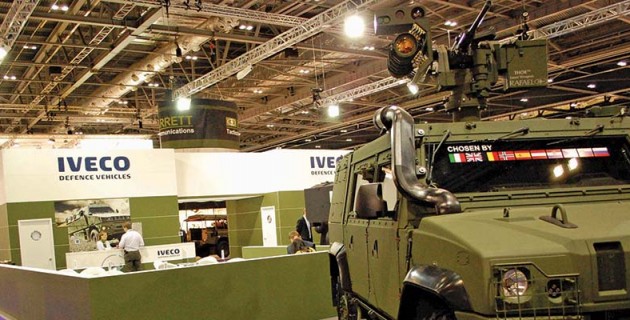 The Defence Security Equipment International (DSEI) 2013 exhibition was held in the London Docklands ExCeL Exhibition Centre on September 10-13, 2013. It is a bi-annual event, held in the autumn to avoid conflict with the other major international defence exhibitions such as IDEX in Abu Dhabi held earlier in the year and Eurosatory in Paris traditionally held the following year. Colt Canada at the Canadian pavilion.

For those unfamiliar with the venue, the ExCeL centre is comprised of two very large display halls (North & South) on either side of a wide centre-isle. Externally, a large maritime anchorage adjoins the Centre, together with ground displays of aircraft. The display halls/areas are ‘themed’ to concentrate particular types of activity and equipment to enable the visitor to focus on their particular area of interest. Themed areas this year included the: The show was very much ‘International’ in scope with virtually all continents and geographical regions represented. Nations making their debut included Chile, Japan and South Korea. Of note was the Mexican X-Arms company debuting their Mendoza submachine gun in standard and compact models. Other manufacturers of individual weapons included all the big names in small arms production such as Arsenal, FN Herstal, Heckler & Koch and US Ordnance. Continuing in a similar vein, ancillary and accessory manufactures were represented by Optix and Opticoelectron of Bulgaria, S C Pro Optics S.A. of Romania and Ring Sights of the United Kingdom to name just a few. Ammunition manufacturers were fully represented from the largest – ATK of the USA to small specialist producers such as the South African, Less-Lethal Africa with their range of in-house developed small arms ammunition. A range of assault rifles were displayed by Arsenal of Bulgaria.