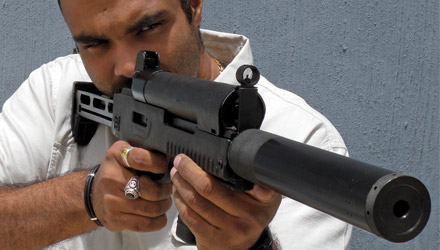 Chinese submachine gun technology has come a long way in the past 50 years.  From the days of chop-shop PPSh-41 variants through the copies of Thompson submachine guns and M3 Greaseguns, a very efficient and high-technology infrastructure has evolved.  Westerners may not be quick to understand the devotion the Chinese have to developing the manufacturing base in their defense industry.  There are reportedly over 10,000 students at any given time who attend engineering courses related to defense design and small arms design.

The Chinese are keeping what they consider the best to themselves – their basic weapon systems in the 5.8mm cartridge types.  The Type 05 submachine gun in the 5.8x21mm indigenous caliber is not for export.  This bullpup style polymer based open bolt submachine gun with its integrated but detachable suppressor is accurate, robust, and well thought out.  The export version is called the “JS” submachine gun, and it is in 9x19m.  There are other submachine guns made in China at present.  The Type 85 is an advance on the old Type 64 design with its proprietary 7.62mm cartridge, and the Chang Feng series of submachine guns are active for export and police use.

During a trip through Southwest Asia, we uncovered a cache of Chinese weapons and were able to disassemble, analyze a bit, and test the CS06 and its suppressor.  We are uncertain of the nomenclature: popular gun lore suggests the LS06 is the suppressor, the Chinese call this the CS06/LS06 model, but we do not know for certain.  The suppressor was an elaborate and overcomplicated design, expensive to machine, and it performed poorly.  Dr. Dater’s initial analysis of how ineffective the design would be was born out in testing.  Lack of time kept us from doing a complete armorer’s photo shoot and video.

Overall, the CS06 was an effective submachine gun platform.  Disassembly was difficult and a bit complex, not near as troubling as reassembly – until we found a manual and discovered the secret in the rear pin system. 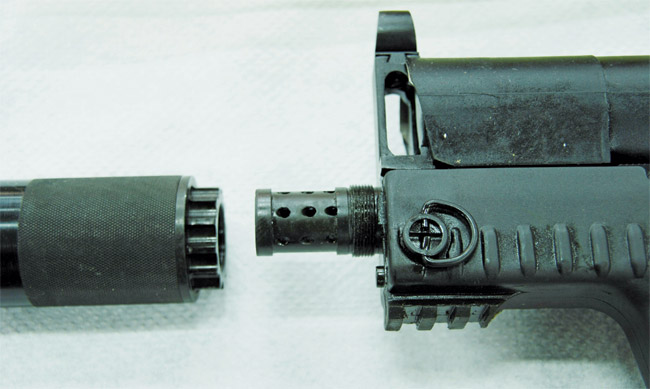 The CS06 submachine gun barrel has rows of angled ports that aim gas into the rear entry chamber of the suppressor. Mounting the suppressor is using the lock ring of the can onto the left-hand, standard metric threads. 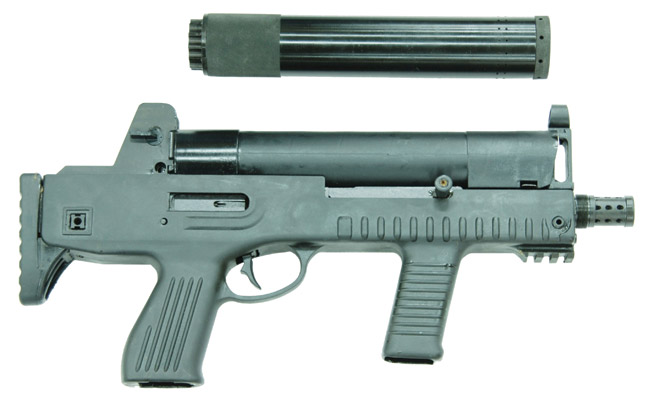 Chinese manufactured (Polytechnologies offers this) CS06/LS06 submachine gun with suppressor above it. Note the 50-round helical drum to contain the 9x19mm ammunition. Charging handle is on the right. The bolt system telescopes around the barrel to shorten the action. A short Picatinny style rail is under the front of the barrel area.