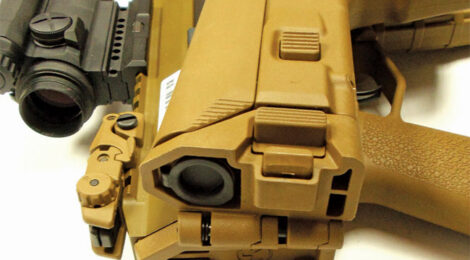 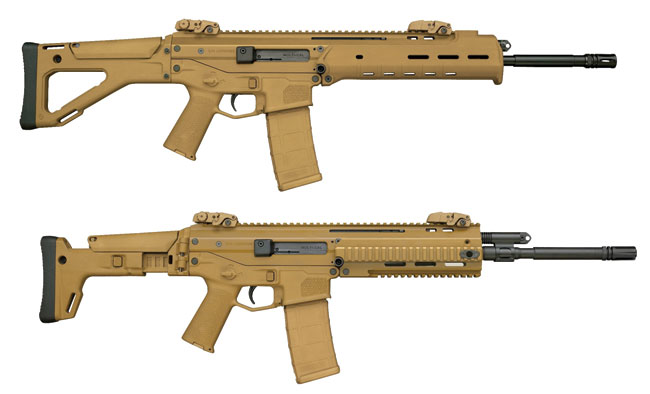 The two primary commercial versions of the Bushmaster ACR. On top is the ACR Basic and the ACR Featured is shown on the bottom. The main differences are the stock type and the handguards.

The provided barrel was a 16 inch, 1/9 inch twist barrel.  It has an M4-type contour and standard compensator.  The barrels for the ACR are cold hammer forged.  The gas system has been changed from the Masada slightly.  The original design had a separate triangular shaped piston that went into the gas block.  The piston was removed from the rear of the block as well as the operating rod.  The current design has a gas plug which is removed from the front of the gas block.  The gas plug also works as a gas regulator allowing settings for normal conditions as well as suppressed.  The face of the operating rod sits on the rear of the plug.  This simplifies the system and makes it easier to clean the gas system.  The gas system is a basic short stroke tappet system.  Currently, development is underway for barrels/bolt and magazines chambered in 7.62x39mm, 6.8mm SPC and 300 AAC Blackout.

There are currently two basic handguards for the commercial versions.  The basic ACR has a smooth handguard identical to that of the Masada.  Rails can be placed through openings located on the handguard.  The ACR featured has quad Mil-Std 1913 rails.  The handguard is removed by pulling out on a captive pin.  Military and law enforcement models are offered with a 5-plane design with user adjustable rail pieces in various lengths.

The ACR was designed with and is shipped with the Magpul PMag.  Perhaps the finest magazine ever developed for the Black Rifle, the PMag has taken the industry over by storm.  As of this writing, Magpul signed a contract with the British military to replace all of their British and H&K STANAG magazines with the EMag.  The super durable polymer magazine sports a natural curve design with a much smoother feed than the standard aluminum magazine.  Unlike metal and aluminum magazines, the polymer has no memory when dropped or stepped on.  The metal mags will have bent feed lips and bodies which the shooter may not know about until the wrong time, when he needs his weapon to work.  The PMag comes with a top cover that when inserted pushes the top round down enough so it does not come in contact with the feed lip.  The magazine can be stored loaded indefinitely.  Also, the PMag can be easily loaded into the rifle with a full 30 rounds on a closed bolt.  GI magazines are extremely difficult and are often downloaded so the mag can be easily replaced.  Although the rifle was provided with the PMag the rifle can use any STANAG magazine.  During testing for this article the rifle was tested with GI aluminum magazines as well as C-Product steel magazines and they all fired reliably.  The magazine catch on the ACR is metal so any magazine can be used.

Bushmaster Firearms maintains all commercial production and sales of the ACR.  Military and Federal law enforcement versions are manufactured by Remington Arms.  The BFI model is available in a 1/9 twist barrel and the Remington model is a 1/7 twist barrel.  Additionally, the military model from Remington offers alternate material lowers, handguards, and stock components.  All these changes were driven by military specification and test requirements. 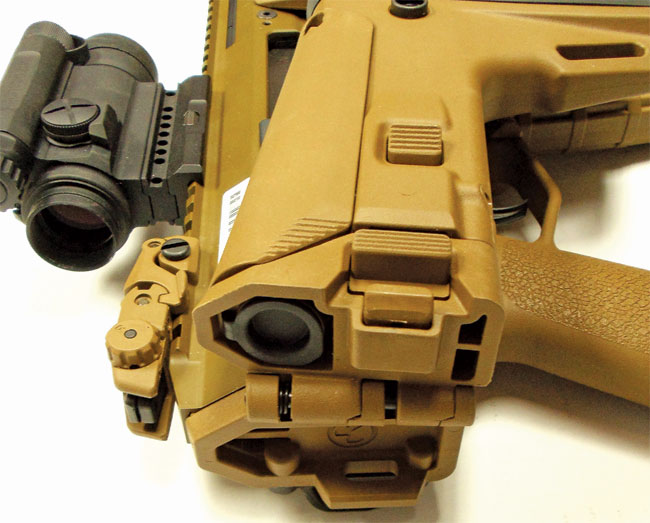 A battery storage compartment is located inside the stock in a waterproof compartment.

The T&E unit was equipped with Magpul back up front and rear sights.  Both are manufactured of polymer and can be engaged by pulling rearward on a lever or merely smacking the base of the sight with your hand.  The front sight is adjusted the same as any M16/M4-type sight.  The only difference is after you have the post zeroed a pin is inserted into the notch on the sight into the base of the sight to lock it in place.  The rear sight has a flip up aperture with only a long and short range aperture.  The rear sight is adjustable for windage only.

The test rifle was equipped with an AimPoint Comp 4 reflex sight and shot at 100 yards for accuracy.  PMag, C-Product steel and aluminum GI mags were used.  The rifle was not lubricated.  The trigger was a standard GI-type trigger that broke at approximately 7.5 pounds.  This is an excellent combat trigger that was smooth with little creep.

Testing was conducted using Silver State Armory (SSA) ammunition.  SSA is known for manufacturing some of the highest quality duty and match ammunition in the industry at competitive pricing.  Silver State Armory just moved to a state-of-the-art facility in Packwood, WA where they have a 100 meter underground range and the facility meets U.S. Department of Defense requirements to manufacture military contract ammunition.  They manufacture their own brass and all SSA ammunition is loaded with custom blends of powder geared towards the specific loading.  They offer several loadings in 5.56mm, 7.62mm NATO, 6.8SPC and .499 LWRC.  They are also one of the only ammunition manufacturers in the United States to manufacture armor piercing rifle ammunition in 5.56mm, 7.62mm NATO and 6.8SPC.

More than 1,200 rounds of SSA 55gr FMJ ammunition were fired for function.  No malfunctions were encountered of any sort.  Accuracy was shot with SSA 77gr OTM ammunition.  The ACR shot consistently at 1 to 1.5 inches at 100 yards with both types of ammunition.  When shooting off hand the rifle seemed rather muzzle heavy.  However, when firing from a rest, I was able to get multiple shots off extremely rapidly while keeping the shots within a 3 inch circle at 100 yards.

The ACR is probably the most anticipated rifle in the past 20 years.  Magpul showing that at the SHOT Show in 2007 was very much like dangling fresh meat in front an industry full of hungry wolfs.  The anticipated delays brought more and more interest from the community.  The ACR has a heftier price tag than that originally foreseen by Magpul.  This is perhaps the only area to criticize.  Certainly experienced weapons enthusiasts and professionals will spend the money to get such a radical departure from the norm as we know of small arms today. In true Bushmaster theme, they manufacture models both in post and preban condition ensuring any citizen will be able to have one of these rifles.

Will this rifle replace the M4 as the next U.S. combat rifle?  We will just have to wait and see.  The M4 is a seasoned combat rifle with many years of field experience.  It is the one to beat.  Many other manufacturers will be there with their new rifles.  It will be a difficult road on many fronts for a new weapon to enter service.  First, the military would have to see a major enhancement from the current system.  This will be very difficult to determine how much of an enhancement justifies a significant leap in technology.  Second, if another weapon was to win would there be money to field a new weapon system?  Would that manufacturer be willing to give the rights of their weapon over to the U.S. government and allow competitive bidding and multiple sources?  Would that manufacturer be able to produce military grade weapons overseen by a government inspector in the quantities needed?  These are but a few of the questions. We will just have to wait and see.  The ACR stands ready to compete for the gold.

Tags: 2011, ACR, Bushmaster Firearms, Christopher R. Bartocci, Magpul, Masada, Silver State Armory Ammunition, SSA, V3N2, Volume 3
← FIAT Revelli Modelo 1914
Elites of the Exercito Brasiliero →
Distributed at trade shows worldwide, Small Arms Defense Journal is a bimonthly publication that focuses on small arms, accessories, gear for the soldier, new products, industry news, and defense trade shows. The first issue of SADJ was Spring 2009, which launched at the LAAD show in Rio de Janeiro, Brazil. SADJ (pronounced “sage”) is targeted toward military, law enforcement, and defense industry professionals. Our job is to reach these groups and tailor content to their interests while producing a publication that is applicable to an international audience.