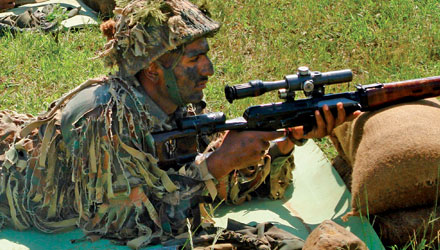 Published in cooperation with Defence and Security of India (www.defencesecurityindia.com).

Indian Army’s snipers desperately lack adequate training, suitable weaponry and specialized supplementary equipment.  The Army attaches little importance to snipers who can alter not only the course of battles and politics, but even history, by simply executing the one enemy who matters the most.  After the Mumbai terrorist attack the operational usefulness of sniping has gained credence among military, security and law enforcement agencies.  There is a new realization that snipers are force multipliers and that their skillful employment can impose caution, cause attrition and demoralize the enemy.

Sniping is a highly skilled, precision killing business, but one that has been employed desultorily by India’s Army and even more randomly by the country’s paramilitaries and rarely, if at all, by the State police forces.  Even though the Army inducted the 7.62x54mm, Soviet-designed semiautomatic Dragonov SVD sniping rifle into service in the mid-1980s, its employment was at best ‘ad hoc;’ confined largely to picking off low-value targets along the Line of Control in Kashmir in a tit-for-tat competition that rages along the unresolved frontier between the neighboring nuclear rivals.

India’s 3,500-4,000 Army snipers – around 10 per infantry battalion and some from the Rashtriya Rifles, the Army’s dedicated counter-insurgency (COIN) force and far fewer numbers in paramilitary and in a handful of specialist units – remain little better than amateurs compared to their Western and even Chinese counterparts.

All that is required of the Army’s Non Commissioned Officer snipers is merely good marksmanship, a skill that gets them temporarily tasked with sniping in careers spanning variegated assignments.  Not for them the kudos, fearful glamour or mystique attached to snipers in the U.S., Russian, British, French and other European armies or the espirit de corps of belonging to an elite band of brothers.

Limited Training
Brief four-six weeks training capsules at the Infantry School at Mhow in Madhya Pradesh for two-man sniper teams, the shooter and his interchangeable buddy or ‘spotter’ are at best, elementary and inadequate.  The spotter in foreign armies is an equally skilled marksman but also specializes in target and atmospheric observation, handling location, security and communications and actually directing artillery fire and close air support.

This instruction includes a combination of firing practice and rudimentary attempts to mentally attune the marksman and his partner to patiently await their quarry through aerobic, yoga and breathing exercises to enhance concentration.

Professional snipers abroad train to master the knack of camouflage and deception by learning to stop breathing and reduce their heartbeats to the barest minimum while firing as even the minutest unsynchronized twitch or movement can prove calamitous in obtaining their target.

“There has been no attempt at building up the ethos of sniping in the Indian Army or any of the other security agencies barring select Special Forces (SF) units and to some extent the Special Action Group of the National Security Guard (NSG) and Special Groups of the Special Frontier Force (SFF),” laments retired Lt. Gen. P. C. Katoch, a former SF officer.  Training of infantry snipers remains rudimentary, he adds.

The Army also has no nucleus of sniper instructors, as none have been nurtured since no foreign, friendly military was willing to instruct Indian soldiers in this specialty.  The handful of NSG shooters, who over recent years have undergone sniping instruction abroad in countries like Israel, were too few in number to be able to institutionally amplify this expertise in any meaningful manner.

The first two SF officers who after much negotiation and persuasion attended an intervention course in France in the late 1970s, with the intent of returning home on specialized appointment, were diverted to other assignments that did not require their newly acquired skills, leaving matters unchanged for the next three decades. A National Security Guard during the 26/11 Mumbai terror attacks.

The U.S. military, however, as part of its annual Iroquois series of continuing joint training exercises with India, has recently agreed to run a special four-week course for its snipers later this year during their bilateral maneuvers.

But above all, the Indian Army attaches little worth to snipers – an 18th century term derived from the game bird, snipe, that is difficult to hunt as it efficiently uses camouflage to remain undetected – who potentially can alter not only the course of battles and politics, but even history by simply executing the one enemy who matters the most.

Concomitantly, it is also an inarguable maxim that one well aimed sniper round, particularly in an urban, law enforcement environment can end up saving many lives by relieving hijacks, hostage situations and even apocalyptic incidents like the November 2008 Mumbai terrorist attacks.

Rare Instance
One rare instance of India’s security forces having effectively employed sniping involved NSG sharpshooters during Operation Black Thunder launched in May 1988 to lift the siege of the Golden Temple in Amritsar by Sikh terrorists.

Crouched atop buildings overlooking the Temple complex, NSG sharpshooters with their favored 7.62X51mm German Heckler& Koch (H&K) locked-roller semi-automatic PSG1A1 sniper rifles, eliminated at least five of the besieging well-armed, trained and committed Sikh separatists successfully bringing the operation to fruition with no casualties to the commandoes.  The PSG1A1s were employed once again during the November 2008 Mumbai terrorist siege relieved by the NSG.

A special badge to boost the snipers’ image, similar to what prevails for designated marksmen in other armies around the world, was introduced in the late 1990s by Army Chief General S. Padmanabhan, but was withdrawn some years ago as it proved unworkable.

Earning the prestigious badge required three confirmed sniper kills.  But senior officers said non-snipers, using assault and other rifles, frequently claimed the designated scalps leading eventually to the insignia being discontinued.  And with its abandonment went whatever fleeting support there had been from Army Headquarters in promoting the tactical efficaciousness of snipers and establishing a dedicated corps of professional marksmen.

Through history, snipers have been grudgingly, almost fearfully, glorified and in recent years their lethal calling has been the focus of several hauntingly successful Hollywood movies like The Deer Hunter in 1978, which ended up as a metaphor for the Vietnam War itself.

Renegade snipers from opposing sides dominated the civil war that wracked the break-up of former Yugoslavia and these shooters, in a sense, emerged as the deadly leitmotif of the bitter ethnic clash in Eastern Europe through the 1990s.  And, closer home in something long forgotten many officers from the hapless expeditionary Indian Peace Keeping Force to Sri Lanka in the late 1980s were assassinated by Tamil Tiger snipers using assault rifles, some of them ironically instructed in firearms use by Indian security agencies.

More recently, however, after the Mumbai terrorist attack the operational usefulness of sniping has incrementally gained credence amongst the military, security and law enforcement agencies as they endlessly battle India’s unrelenting insurgencies and armed separatist movements.

Expanding Terror
The rapidly deteriorating internal security situation, with the proliferation of Naxalite-spawned Red Terror, has triggered a rethink of tactics in this seemingly unending and proliferating guerilla war. The failure of the administration’s inchoate strategy of large-scale paramilitary and police deployment against wily Naxalite cadres has gradually shifted tactical thinking in the direction of developing a surgical killing capacity via snipers.

The Naxal-favored forest terrain of areas like Chattisgarh where their top leadership is reportedly secreted is a conflict zone ideally suited to snipers.  If adequately trained and equipped and judiciously deployed, these sharpshooters can effectively depreciate the Maoist hierarchy, security planners say.

“There is a new realization in the military and other security organizations that snipers are force multipliers and that their skillful employment can impose caution, cause attrition and demoralize the enemy,” a senior infantry officer avers.