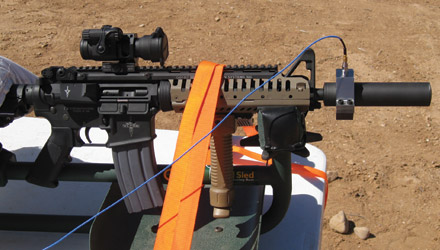 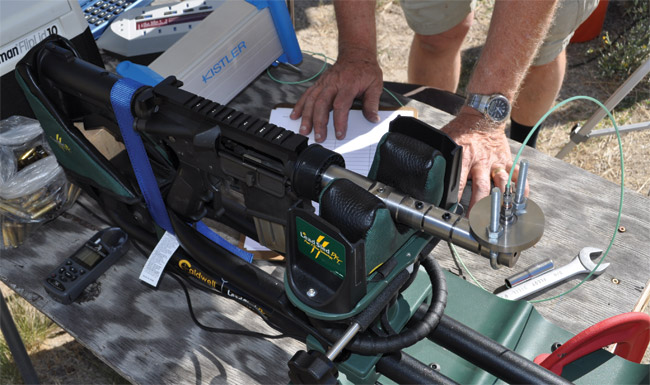 As each set of measurements is recorded, the barrel was shortened (and re-crowned) an inch at a time and the pressure sensor moved to the resulting farthest location. In this photo, the barrel has been shortened to eight inches.

There has been a cultural shift from the 20-inch barrel length in the AR-15/M16 weapon systems chambered for the 5.56×45 NATO cartridge to progressively shorter barrels for the purpose of producing an increasingly more compact assault/entry weapon without resorting to a bull-pup design.  Simple usage of these short-barreled weapons has shown the necessity for both sound and flash suppression, the intensity of which (in exceptionally short barrel lengths) approached the intensity of a flash-bang diversion device.  This shift toward shorter barrels has resulted in the U.S. Army and Marine Corps adopting the 14.5-inch barreled M4 carbine with a re-design of the 5.56×45 from the 55 grain SS-109 to the 63 grain M855 ammunition to optimize this barrel length.  The differing bullet design also necessitated a change in the rifling twist rate from the original 1:12 inches to 1:7 inches.

Law enforcement and some special operation units have continued this trend by using weapons fitted with 10.5-inch barrels, and there is some misguided law enforcement interest (in these author’s opinions) in the M16 type weapons using 7-inch barrels.  Besides the horrendous flash and sound levels, these ultra short barreled weapons introduce significant ancillary issues, including weapon functioning and reliability as well as projectile stability and cartridge lethality.

One of the authors routinely measures entrance chamber pressures in his company’s suppressors to calculate safety factors for different standard barrel lengths. A special mount holding the Kistler 6215 piezoelectric sensor clamps over the suppressor where a 2.5 mm hole has been drilled through the suppressor wall. Shown is a 5.56mm suppressor on a 10.5-inch barreled M16 in a Lead-Sled rest.

In recent years, designers have become aware of limitations to suppressor structural integrity due to rapid pressure variations in the entrance chamber of their suppressors.  The entrance chamber is easily visualized as a simple cylinder that acts like a pressure vessel with a hole in the far end to control the rate of pressure decrease.  With gunfire, the pressure peaks almost instantaneously and drops literally in microseconds.  A lot of structural stresses are applied in this short time interval.  A firearm barrel can also be visualized as a pressure vessel, but one of varying length as the bullet progresses throughout its length.

Intuition has transitioned into the sound engineering practice of actually measuring pressures in the suppressor entrance chambers to calculate hoop stress and, by knowing the yield strength of the material, the safety factor.  While some of these factors can be approximated through calculations, actual measurements are definitive.  These issues are the subject of this paper.

Sound is generated by the sudden release of high pressure gases at the muzzle at the moment of bullet exit, and to adequately control (or reduce) the sound level, a suppressor must be designed to handle this pressure.  What has not been immediately apparent is the relationship between suppressor entrance chamber pressures and residual pressure in the bore of the firearm at the instant of bullet exit, and (by extension) the problems in suppressor design.  With finite element analysis for suppressor design becoming more prevalent, actual measured pressures will give far more accurate and believable information than pressures estimated (or calculated) from SAAMI (Sporting Arms and Ammunition Manufacturers’ Institute) peak chamber pressure tables.  SAAMI pressures are measured with specific chamber dimensions and ammunition, and not all chambers match the SAAMI chambers exactly, especially military chambers. 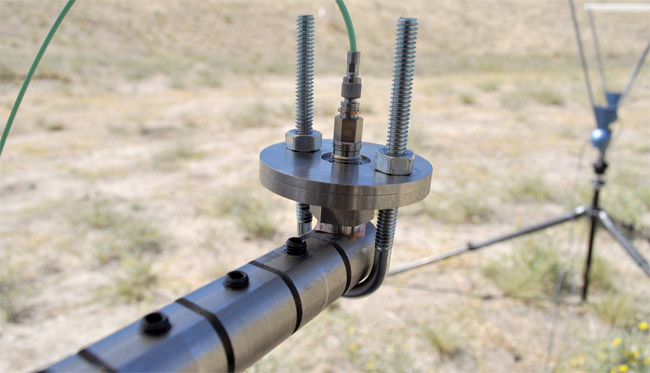 The piezoelectric sensor is shown in place on the 24-inch barrel with a safety U-clamp. The weapon is mounted in the machine rest ready for test firing.

The other question raised is one of kinetic energy of the bullet, which varies with the weight (mass) of the projectile and the square of the velocity.  Intuitively, one knows that the velocity will vary with the barrel length, but the actual variation cannot be easily determined from a single barrel length measurement.

The authors have serious concerns about these issues of reliability, function, lethality, and velocity as the barrel lengths decrease.  By examining bullet velocity, sound levels, and bore pressures as a function of barrel length, the authors hoped to correlate and determine optimal barrel length in response to current requests for short barreled M16 type weapon systems.

Concurrent to the desire to shorten barrels is the requirement for reducing weight of accessories, including sound suppressors.  While some suppressors are redesigned to utilize strong, lightweight alloys, others simply reduce weight by thinning structural elements, including the outer wall thickness.

Hoop stress is the name given to a calculation of forces that attempt to rupture a chamber or pressure vessel.  A silencer, especially the entrance chamber, is a pressure vessel that contains the pressurized gases for only an extremely short period of time.  The units of hoop stress are pressure units (psi) and are proportional to the diameter and highest peak internal pressure and inversely proportional to the wall thickness. 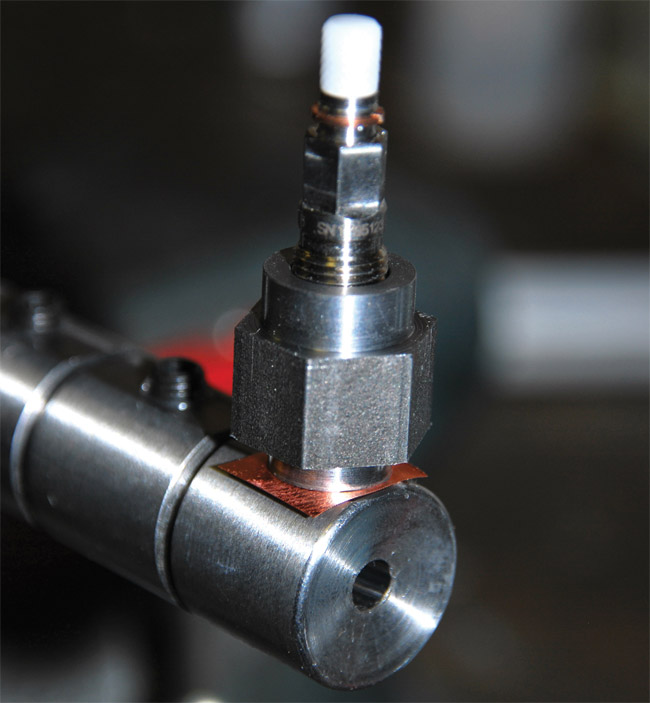 Further, since the instantaneous peak pressure in the entrance chamber of a suppressor is proportional to the pressure in the bore of the rifle at the instant of bullet exiting (uncorking) from the muzzle, it also follows that when used on short-barreled weapons chambered for the 5.56×45 NATO cartridge, pressures in the suppressor may well exceed the suppressor’s integrity, resulting in failure and possible injury.

Altering barrel length seriously affects not only weapon reliability, but also projectile velocity (including kinetic energy), non-suppressed sound levels, and flash intensity.  Short barreled gas operated weapons, of which the AR-15/M4 platform is of interest, pose increasing reliability errors with decreasing barrel length.  The prime reason is that as the barrel is shortened, there is decreased dwell time of the projectile in the bore after passing the gas port.  This makes timing more difficult, and adding muzzle accessories (such as a sound suppressor) will cause serious reliability issues, such as faster cycling.  Projectile gyroscopic stability depends on rotational velocity, which is determined by twist and linear velocity.  Instability will cause yaw (and keyholing) immediately on uncorking, which can damage suppressor parts and result in an unpredictable bullet path. 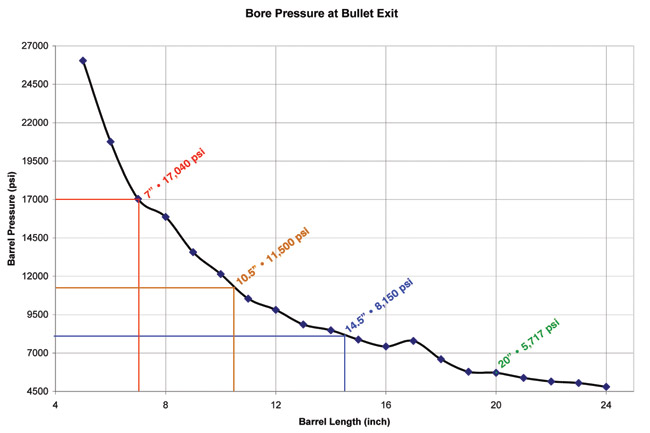 Five-round average pressure in the bore at the moment of bullet uncorking is plotted against barrel length. It is apparent that the pressure rises exponentially with decreasing barrel length. This rapidly increasing pressure produces significantly higher sound levels as well as flash and strain on suppressor design. The values for 10.5 and 14.5 inches were calculated by averaging the adjacent measurements. 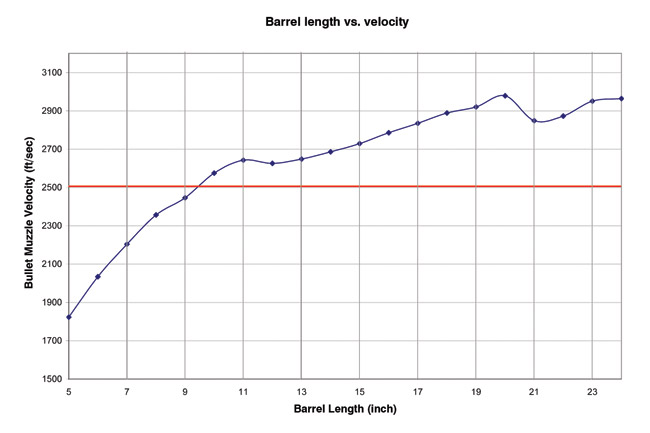 The maximum velocity for the M855 projectile occurred in a 20-inch barrel. This is anticipated since the cartridge was designed specifically for this barrel length. Velocity drops rapidly as the barrel length decreases, especially below 10 inches where the velocity drops below 2,500 fps. M855 bullets traveling below 2,500 fps when impacting a target will not produce a lethal wound channel.

There have been a number of studies demonstrating the barrel external temperature gradient as a function of barrel length in addition to numerous studies of muzzle velocity as a function of length.  The authors are not familiar with studies relating length to measured (rather than calculated) bore pressures, especially port pressures at the instant of bullet exit (uncorking).

Experiment Setup
The experiment was to measure the bore pressure at the moment of bullet uncorking from the rifling for various barrel lengths.  It is common knowledge that actual direct reading piezoelectric port pressures are far more accurate than strain gauge measurements, especially since pressure measurements are desired only at the end of the barrel.  Once a piezoelectric sensor is calibrated, it can be used in many locations.  Conversely, a strain gauge must be recalibrated for each measurement location.

A 24-inch AR-15 barrel (1:7 twist) was obtained and prepared for the test.  The barrel used lacked a gas port for operating the mechanism, resulting in a single-shot weapon.  This was done to avoid inconsistencies caused by using some of the gas pressure to operate the action.  The barrel was marked by a partial cut in at 1-inch intervals starting at the far end and ending 5 inches from the bolt face.  For consistency, ammunition used was all military M855 ball, Lake City 2009, and all from the same lot.  Further, to assure consistency, the ammunition was stored in a cooler until it was loaded and fired.