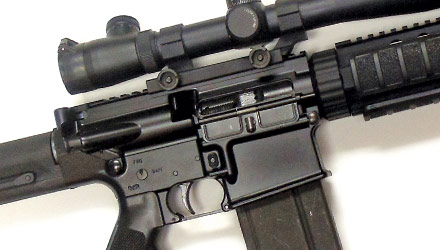 Early in the wars in Afghanistan and Iraq it was clear by the entire sniping community there was a need for a new updated sniper rifle.  Modern semiautomatic rifles show little to no accuracy degradation from the traditional bolt action rifles used throughout the last century.  The use of a semiautomatic sniper system not only would provide the snipers with their existing capabilities but so much more.  Snipers could engage five targets in at least half the time it would take a sniper with a bolt action rifle.  Also, the snipers ability to engage multi-targets is vastly increased.  The sniper also would have 20 rounds of ammunition rather than the 5 of the standard bolt action rifle.  It was time for an update.  Onset the XM110 SASS Program (Semi Automatic Sniper System).

There already existed a weapon in the military system that fit most of the requirements, the U.S. Navy’s Mk11 Mod0 sniper rifle.  The Knight’s Armament Company rifle is based on Gene Stoner and Reed Knights SR25 rifle – a modernized AR-10 if you will.  This rifle began service in 1990 and distinguished itself within the SOCOM community.  Based on the well known M16 weapon system, this makes the user feel right at home and comfortable with the feel, operation and maintenance of the weapon system.  This weapon was ready to go mainstream to enhance a sniper’s ability to do his job more efficiently and enable him to deal with any situation which may arise.

The SASS program was announced by the military in November of 2004.  Several companies submitted entries.  This would include companies such as Knight’s, Remington, DPMS and ArmaLite.  Mark Westrom of ArmaLite, a retired U.S. Army Ordnance officer, entered a version of his proven AR-10 rifle.  He took his standard design and made the needed changes to make his Geneseo, Illinois made rifle compete for the gold.  Westrom and ArmaLite are not new to the military market; they have rifles in service in Canada as well as Israel.  Westrom knew it would be all but impossible to displace the Knight’s Armament Company rifle already in service. 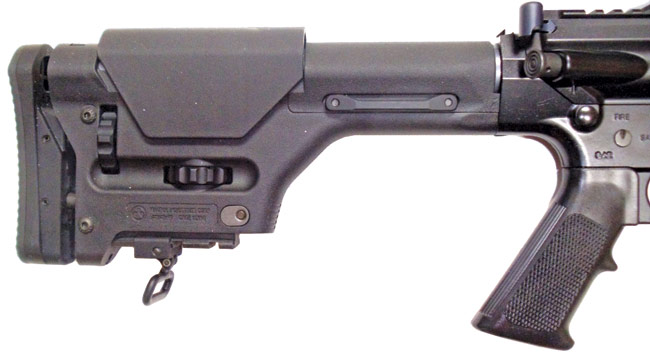 The telescopic stock of the ArmaLite XM110 was replaced with the Magpul PRS (Precision Rifle Stock) which is one of the finest stocks of its type. The PRS has adjustable buttplate as well as cheek piece. Additionally, a rail is located on the bottom to accept a monopod if desired.

The ArmaLite XM110 took the basic AR-10 design ArmaLite has produced since it came to market in 1994 and utilized a telescopic 6-poition VLTOR club foot stock assembly.  The requirement stated an adjustable stock, which could either be a telescopic or a fixed stock with an adjustable buttplate. The rifle was all coyote tan in color per requirement.  The rifle was equipped with a match grade 2-stage trigger manufactured by Chip McCormick.  ArmaLite designed back-up front and rear sights were used along with an ArmaLite designed free floating handguard with quad Mil-Std 1913 rails.  The barrel was chambered for the 7.62x51mm NATO cartridge with a 20-inch 1 turn in 11.25 inches and was equipped with a mount for a Sure Fire sound suppressor.  The gas flow was adjustable permitting normal use, suppressed as well as complete gas shut off.  There was a scope requirement but no particular scope was specified.  ArmaLite opted for the Leupold 3.5×10 match scope which had been used with confidence on the Mk11 MOD0.  The maximum effective range of the rifle was 1,000 meters with a barrel life of 7- to 10,000-rounds depending on maintenance and how it is used.

The AR-10 series produced by ArmaLite uses a modified M14 magazine rather than the original AR-10/SR25 magazine.  The ArmaLite AR-10 was introduced to the market after the U.S. Federal Assault Weapon Ban.  Westrom wanted all of his customers to be able to have high capacity magazines.  There were very few of the original ArmaLite AR-10 magazines or Knights SR25 magazines available in the market and if you could get them they were extremely expensive.  Knowing of the extensive stocks of M14 magazines, Westrom opted to design his rifle around this magazine and making a few modifications that included replacing the follower with one equipped with a spring loaded plunger that would actuate the bolt catch when the rifle fired its last round.  Over the decade of the ban, ArmaLite offered these modified magazines for sale and would convert customer magazines over if they were sent to the factory.  After the sunset of the assault weapon ban, ArmaLite went to work to develop their own magazine, which is based on the M14 design but modified for use in the AR-10.  Currently Westrom offers 5-, 10-, 20- and 25-round magazines.

Monroe County Sheriff Deputy Stephen Warden test fires the ArmaLite SUPER SASS rifle while the author’s 8 year old daughter Sophia spots for him. Warden is a firearms instructor as well as a veteran of both Afghanistan and Iraq.

Also per requirement the rifle was provided in a Hardig polymer case which added over $1,000 to the cost of the weapon system.  Provided were cleaning materials, spare parts as well as a sling.  On September 28, 2005 Knight’s Armament Company was awarded the contract for the M110.

Westrom put much development into his SASS rifle and saw it had potential for other military, law enforcement as well as commercial markets.  Now without the restrictions of the solicitation, Westrom went on to develop his AR-10 Super SASS rifle.  The Super SASS was revealed to the shooting community at the SHOT Show in 2006.  The Super SASS is a suppressor ready rifle.  The adjustable gas system has two settings, one for normal use and another for use with a sound suppressor.  The valve can be moved with the base of a 7.62x51mm cartridge.  The Super SASS was designed to work with the Advanced Armament S3R large chamber suppressor. However, if you are unable to possess a sound suppressor for one reason or another, ArmaLite offers a look-alike which can be mounted on the barrel for cosmetic purposes.  The 20 inch match grade heavy triple lapped barrel is ceramic coated AISI 416R stainless steel with a 1 turn in 10 inch twist optimal for 150 to 175 grain projectiles.  The ammunition suggested by ArmaLite is the 168 and 17grain match loads.  ArmaLite guarantees 1 MOA out of the box on all Super SASS rifles.

The receivers are manufactured from 7175 T-74 aluminum forgings.  The upper receiver is a flattop upper receiver with a Mil-Std 1913 rail.  This rifle features the fairly newly released forward bolt assist.  The upper receiver also has a fired cartridge case deflector preventing fired cartridge cases from hitting a left-handed shooter in the face.  The rifle is equipped with a Precision Reflex Company manufactured gas buster charging handle which prevents rifle gases from coming back at the shooters face when firing the rifle with a sound suppressor on it.  There is a standard A2-style compensator provided on the muzzle.  The bolt carrier group is modified with forward assist notches and maintains the standard manganese phosphate finish.  ArmaLite used the rubber “O” ring reinforcement of the extractor spring.  This is good insurance especially when firing the rifle in the sound suppressed mode.  Suppressors over gas the rifles gas system making it work much faster.  The extra pressure on the extractor increases extractor force giving additional strength in extracting a cartridge case that is slightly optureated still caused by the bolt opening sooner.  The rifle is provided with three rail protectors for offhand shooting. 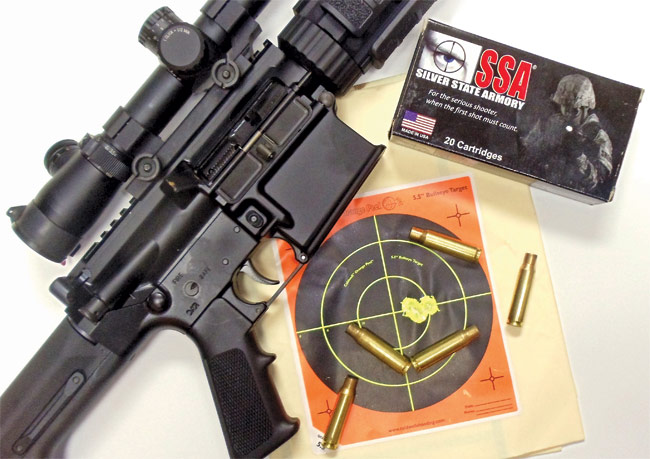 The SUPER SASS shot like a world class sniper rifle. From a distance of 100 yards the rifle fired a .44 MOA group using 5 rounds of Silver State Armory 7.62x51mm M118 Match ammunition that is loaded with a 168gr open tip match bullet.

The lower receiver utilizes the Magpul Precision Rifle Stock (PRS), perhaps the finest stock of this kind on the market.  The stock has adjustable cheek weld as well as butt plate.  The stock has a club foot design enabling the shooter to place the non firing hand on it to lock the stock into the shooters shoulder.  The bottom of the stock has a short Mil-Std 1913 rail allowing the attachment of a monopod.  The rifle has a National Match two-stage trigger with a first stage of 2.5 lbs and a second stage of 4.5 to 5 lbs.  The rifle was shipped with one ArmaLite 10- and one 20-round magazine.

The rifle was provided with a Leupold Mark 4 3.5 to 10x scope with an illuminated reticle.  This scope has a 40mm objective and is equipped with bullet drop compensator for the 7.62x51mm round with a 168gr projectile.  The illuminated reticle is turned on or off by the user and has 11 increments of brightness.  The scope was mounted in an ArmaLite 30mm scope mount.

The overall stats on the rifle come in with a 20 inch heavy barrel.  The overall length of the rifle is 44.5 inches and weighs in at 12 pounds.  The fit and finish of the rifle was superb.  The receivers were nice and snug.  The rifle is clearly ArmaLite’s crown jewel and for good reason.  The rifle has an effective range of 1,000 meters.  The rifle was tested with Silver State Armory 7.62x51mm 168gr (M118) and 175gr OTM (M118LR) ammunition as well as Hornady .308 Win Superformance Match 175gr BTHP (#8077) ammunition.  The best group shot was with the 168gr Silver State Armory ammunition at .44 inches at 100 yards.  However the other two types of ammunition all grouped between .50 and 1.0 inches.  Recoil was mild compared to many autoloading 7.62x51mm rifles.  The in-line construction of the Stoner weapon system greatly contributes to this enhancement in handling.

Whether military or law enforcement, the tactical sniper would have everything needed in a sniper rifle with the ArmaLite SUPER SASS.  Precision accuracy, reliability, firepower and high quality workmanship are all hallmarks of this rifle.  For the commercial customer whether it be a competitor, hunter or recreational shooter you can own a military grade sniper rifle. 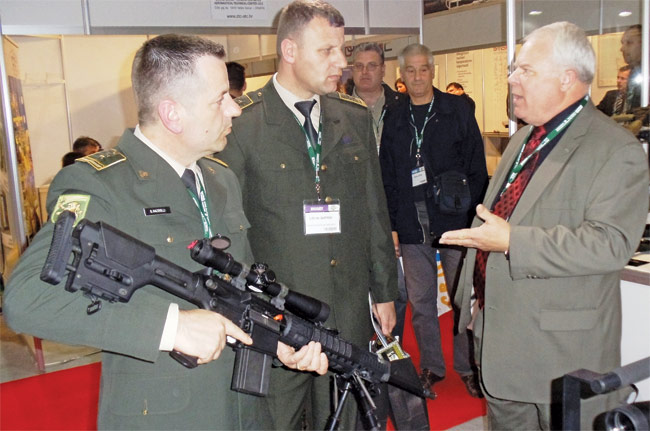 Retired U.S. Army Ordnance Officer Lt. Col. Mark Westrom, President of ArmaLite (right) describes the merits of his SUPER SASS to two Kosovo Army Officers at the Adriatic Sea Defense& Aerospace show in Split Croatia in March of 2011. The SUPER SASS drew quite a lot of interest with snipers who are used to the heavy and high recoil Dragunov sniper rifles. They had never seen a rifle the quality of the SUPER SASS in the former Warsaw Pact countries.