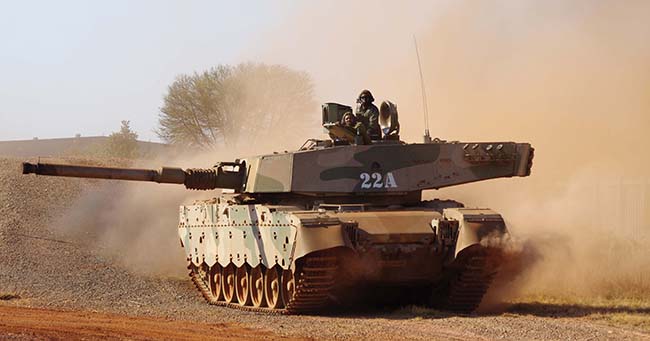 The 9th edition Africa Aerospace and Defence (AAD), the continent’s Premier Exhibition and show of Air, Sea and Land will be taking place from 14- 18 September 2016. The AAD was born from the Aerospace Africa civilian exhibition (the roots of which lay in the original Lanseria air show in 1975) and the DEXSA military exhibition.

Organized and managed by the successful partnership of the Department of Defence and Military Veterans (DOD), Armscor (Armaments Corporation of South Africa SOC), AMD (South African Aerospace Maritime and Defence Industries Association) and CAASA (Commercial Aviation Association of Southern Africa). The event attracts over 400 exhibitors from over 30 Countries.

While AAD covers the full spectrum of defence equipment, the focus has been on ground forces equipment, which is where most African requirements lie. Ground forces equipment and secure communications and elements of electronic warfare have also been the main areas of focus of the South African defence industry, although it has developed remarkable systems and equipment in the air force and naval environment, notably the Rooivalk attack helicopter, which is of obvious and considerable importance to ground forces, and the Umkhonto SAM, which is also offered as a ground-launched weapon.

The state-owned Denel is the major actor in South Africa’s defence industry, with most divisions active in developing and manufacturing equipment for ground forces – from combat vehicles and artillery systems and guided weapons at one end of the scale to explosives-sniffing dogs at the other. Two companies partly owned by Denel, Rheinmetall Denel Munition and Airbus Optronics develop and manufacture munitions and optical/optronic equipment. Other South African defence companies active in the ground forces sector include DCD Protected Mobility, Integrated Convoy Protection, OTT Technologies, Paramount, Reutech, Thales and Truvelo, plus many who develop and manufacture components or materials such as ceramic armor (MOH-9).

Other South African companies import and where necessary adapt equipment for ground forces, and several foreign companies will be showing equipment they believe suited to African military and paramilitary requirements. In the past that has included Chinese, Indian, Russian and Ukrainian companies. This year it will include the armored vehicle specialist Streit and possibly some other newcomers to AAD.

Denel Land Systems is best known for long-range artillery, and will show the current versions of its 155 mm G5 and G6 guns, a truck-mounted 155 mm long-range gun and its LEO long-range (30 km+) 105 mm gun, which has also been developed as a turret system for medium vehicle platforms. RDM will show their long-range artillery ammunition and other munitions. Another interesting system likely to be on show is the Scorpion mobile mortar system developed by Thales in South Africa.

Denel is also very active in the field of combat and protected vehicles: Denel Land Systems is the prime contractor for the Badger infantry combat vehicle, for which it developed the turret, which is being exported to Malaysia, the cam-operated 30 mm cannon and 60 mm breech-loading mortar. Denel has also acquired the former BAE Land Systems South Africa, now Denel Vehicle Systems, and will be showing their RG series of mine-protected vehicles, including the light RG32M that has been exported to several countries including Sweden, and the RG12 police riot control vehicle that has been exported to Italy and other countries. Among them will also be the RG35, which is now being further developed by the Nimr group in the United Arab Emirates. 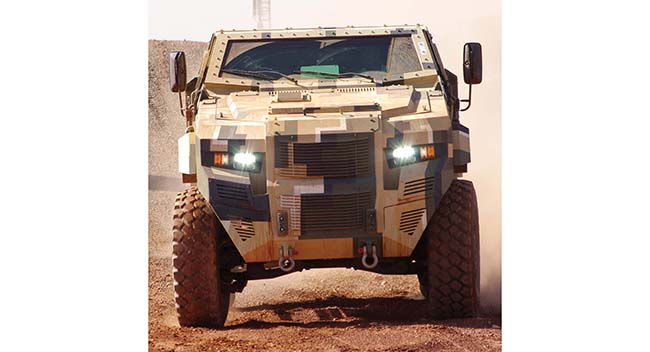 Denel’s Mechem has a full range of Casspir mine-protected vehicles in production in the NG2000 family – armored personnel carrier, weapons carrier, command vehicle, truck, tanker, recovery vehicle and ambulance – allowing an entire battalion to be equipped with a single vehicle type. Mechem is also active in several countries in clearing mines and unexploded ordnance, and has developed its dog-centered explosives sniffing system to also be used in the counter-narcotics role.

Also in the Denel stable is Land Mobility Technologies, which has developed a range of military and paramilitary vehicles that have found a ready export market, protected cabs for trucks (in use by Canada), protected personnel containers and protection kits for light vehicles. LMT also developed the flat-bottom mine-protection kit and the internalr fit of the Badger.

Other companies active in the field of protected vehicles include Integrated Convoy Protection, whose Reva vehicles have been exported to the Middle East and Asia; OTT technologies, whose M36 mine-protected APC is in service with the Kenyan Army and the UN among others, and who have also developed a light armored patrol vehicle on the basis of the Brazilian Agrale Marrua utility vehicle. The Paramount group will show its mine-protected vehicles, including the latest version of the 6×6 Mbombe and the very impressive four-wheeled Mbombe 4 that was originally developed by Industrial and Automotive Design.

The Streit group will be showing some of its wide range of paramilitary and military vehicles.

A rather different mix of vehicles will be shown by DCD Protected Mobility. The emphasis will be on the Husky mine-detection vehicle, which is one of relatively few non-American systems ever to be type-qualified by the US Army, and which proved effective in Bosnia, Iraq, Afghanistan and Somalia. Other DCD vehicles on show will be the innovative Mountain Lion MRAP vehicle with its four-wheel steering, the simpler Springbuck mine-protected patrol vehicle that is being exported to Nigeria and elsewhere, the Oribi light modular truck and the Testudo remotely-operated vehicle for explosive ordnance disposal and close reconnaissance tasks.

Denel Dynamics will be showing the Ingwe anti-tank missile in its vehicle and ground mount form, Mokopa missile with both anti-tank and blast/fragmentation warheads and the Umkhonto surface to air missile, which is in service with the South African, Finnish and Algerian navies, and which has been developed as a ground-launched system for Army use. Related to this, Reutech Radar Systems will be showing their dual L/X-Band RSR 320, which is being developed with an eye to the SA Army’s requirements.

At the lighter end of the ground forces equipment scale, Denel Land Systems will be showing its long-range (6 000 m) 60 mm mortar, its 40 mm automatic grenade-launcher and its long-range anti-materiel rifle, which has proven itself in the long-range sniping role in the course of peace-enforcement operations in the DRC. Denel’s small arms ammunition division, PMP, will also show the innovative 20×42 mm individual fire support weapon, and Truvelo a range of sniping and anti-materiel rifles in calibers from 7.62 mm to 20 mm.

Other South African companies that will be showing equipment related to ground forces include the Reutech group, which will show its Rogue overhead weapons mounting, ‘Stealth Rad’ family of low-probability of detection ground surveillance and air warning radars, as well as tactical communications equipment. Saab Grintek Defence will show their electronic self-protection system for combat vehicles, which has been exported to the Netherlands.

Among the South African companies showing both its own and imported equipment is Twiga, who will be showing weapons mounts, night vision equipment, the Thermoteknix range of thermal fusion devices. Twiga will also show patrol craft manufactured using high-density polyethylene, which makes them impervious to small-arms fire and other light damage. While not strictly ground forces equipment, the smaller versions are ideal for river and lake operations that often fall within the ambit of ground forces.

With 95% of the exhibition space sold out. Traders can expect a fully-fledged display of Land forces innovation and capability from African and global industry players. Once again AAD 2016 will feature a mobility track to give vehicle manufacturers a chance to showcase proficiency.