Browse: Home   /   SOST: A Way Forward in Contemporary Understanding of the 1899 Hague Declaration on Expanding Bullets 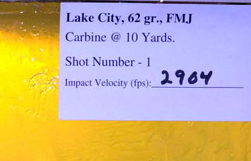 SOST: A Way Forward in Contemporary Understanding of the 1899 Hague Declaration on Expanding Bullets

In 2006, the U.S. Special Operations Command’s Special Operations & Technology (SOST) office tasked the Crane Division, Surface Warfare Center, to develop a general combat ball round that would exhibit enhanced internal and external ballistics, and improved consistency in its terminal ballistics.  It required a capability to defeat intermediate barriers such as auto glass and doors when fired in a carbine-length weapon system.  The ammunition would have to maintain full compatibility with all existing weapon platforms.  In 2010, the United States Special Operations Command and the Marine Corps adopted the 62-grain 5.56x45mm MK318 MOD 0 SOST cartridge for use in all weapons of that caliber.  One other government arrived at a favorable legal review of SOST ammunition.  Its acceptance for military use offers further clarification of the 1899 Hague Declaration Concerning Expanding Bullets with respect to military small arms ammunition development.

The 1899 Hague Declaration
The First Hague Peace Conference brought together diplomats, military and scientific experts, and international lawyers from twenty-six of the fifty-nine nations that existed as sovereign states at that time.  It considered a broad range of proposals to limit resort to war, disarmament initiatives, and rules to temper the effects of combat with regard to injury to combatants and protection for the civilian population.

Initiatives often masked self-interests or political views of particular governments.  Disarmament proposals tended to play to a proponent’s strengths while governments individually resisted disarmament restrictions in areas where each was weak.  “Humanitarian” arguments were made to express support for or opposition to proposals under consideration depending on a delegation’s position.

Such was the case with respect to what became the 1899 Hague Declaration Concerning Expanding Bullets.  A question by the Swiss military representative as to a need for prohibiting military small arms projectiles “which aggravate wounds and increase suffering” focused on the British RL2 9402, Mk III .303 bullet, commonly referred to as a “Dum-Dum” owing to production of the cartridge at its arsenal near Calcutta.  The Netherlands representative, expressing his government’s opposition to British military operations against Boer (Dutch) settlers in South Africa, offered strong support in reply to the Swiss question.  Proponents relied on a report by a private German citizen using a civilian rifle and hunting ammunition to bolster their arguments.  Attacks on the British Mk. III were misplaced.  British forces did not use the Mk III in the Anglo-Boer War (1899-1902).  Boer guerrillas allegedly employed hunting ammunition against British Commonwealth forces.  Some New Zealand soldiers may have brought limited amounts of Mk III ammunition with them to South Africa without official authorization, arriving after the 1899 Hague Conference concluded.

British defense of the Mk III was vigorous, pointing out that the terminal ballistics of the Mk III were significantly less than the (e.g.) .577 Snider and .45 Martini weapons that preceded caliber .303 weapons.  British arguments drew support from the U.S. delegation.  Captain (later Major General and Chief of U.S. Army Ordnance, 1901-1917) William Crozier argued the proposal should not focus on one particular design, but instead prohibit bullets that were designed to cause superfluous injury, terminology contained in the text of another treaty under consideration and ultimately adopted.

The Contracting Parties agree to abstain from the use of bullets, which expand or flatten easily in the human body, such as bullets with a hard envelope which does not entirely cover the core or is pierced with incisions.

The language did not limit expanding ammunition use in “colonial wars,” that is, its employment by government forces against insurgents within their respective colonial territories.  In using “abstain” rather than “prohibit,” the 1899 Hague Declaration Concerning Expanding Bullets was an arms control agreement, that is, each government accepting the Declaration agreed not to use expanding ammunition so long opposing military forces refrained from its use.  As such, the Declaration’s text did not conclude that “bullets which expand or flatten easily in the human body” cause superfluous injury.

The 1899 Hague Declaration Concerning Expanding Bullets was written in the midst of a revolutionary time in military ammunition development.  Less than a quarter century prior to the 1899 conference, military forces were equipped with single shot black powder rifles firing 10 to 12mm lead bullets at velocities averaging less than 500 meters per second.  They expanded in soft (human) tissue.  France introduced the more powerful smokeless powder in military cartridges in 1886 with its 8mm Lebel.  Switzerland developed jacketed ammunition in the mid-1880s, fielding its 7.5mm Schmitt-Rubin 7.5x53mm cartridge with a round nosed projectile fired at 600 meters per second in 1890.  By the 1899 Hague Peace Conference, modern armies had developed and been equipped with magazine repeater rifle in 6.5 to 8mm caliber employing round nosed bullets with velocities ranging from 600 to 800 meters per second.  The Declaration is a qualified prohibition that must be viewed in light of historical practice prior to, at the time of, and since its adoption.

It may seem incongruous to speak in terms of a prohibition on superfluous injury or unnecessary suffering (synonymous terms) with respect to military small arms ammunition given that under the law of war military personnel can be and are eviscerated by mines, booby-traps (today referred to as improvised explosive devices), mortar and artillery fire, vaporized by bombs and other explosive devices, or struck by larger caliber 12.7mm, 14.5mm, 20mm or 30mm direct fire weapons.  Yet the prohibition against superfluous injury acknowledges a delicate balancing agreed to by governments between what is and is not legitimate in warfare.  In the development, acquisition, and fielding of all military weapons, including small arms ammunition, it is an important factor.  Proper application requires knowledge of history.

With few exceptions, such as German High Command authorization of 7.92x57mm “B Patrone” aerial spotting ammunition for antipersonnel use by German snipers on the Eastern Front during World War II, military forces generally complied with the 1899 Hague Declaration for operational reasons: (a) weapon functioning reliability, particularly in machine guns, (b) no identified military requirement for ammunition other than full metal jacketed ball and related (tracer, armor piercing) projectiles, and (c) a desire by armies to limit the types of ammunition within their respective logistics pipelines. Twentieth Century military rifle bullets have tended to deform, expand, and/or fragmented in soft tissue at ranges of 250 meters or less. A 1989 article by Colonel Martin L. Fackler, MC, USA, illustrated a fragmented NATO Standard 7.62x51mm German ball round (DM41 or DM41A1) shot into ten percent ordnance gelatin as described in the body of this article. In 1992 the new German law of war manual stated ‘It is prohibited to use bullets which expand or flatten easily in the human body’, an assertion at odds with history. Two months later, for environmental reasons rather than compliance with the manual statement, the German government replaced the DM41 and DM41A1 with the DM111, a boat tail steel projectile with gilded metal plating jacket over copper wash. A ‘green’ primer was used and the lead core capped with a closure disc. The 1899 Declaration led to confusion by lawyers (through lack of knowledge of small caliber ballistics and historical practice) and hesitation by armaments specialists (through lack of understanding of the Declaration’s text and history), often exacerbated by focus on a particular point without considering the issue in its entirety.  Judging open-tip ammunition solely on projectile appearance resulted in delay in its adoption by military snipers, as described by the author in a previous article (“Open Tip Match: When a ‘Hollow Point’ is Not a Hollow Point,” SADJ, Vol. 4, No. 2, 2012) is a case in point.

In his article “Wounding Patterns of Military Rifle Bullets” (International Defense Review 1, 1989), Colonel Martin L. Fackler, Medical Corps, U.S. Army, an experienced combat surgeon, provided photographic evidence showing that while the U.S. version of the 7.62x51mm NATO ball (M80) remained intact and without deformation upon striking soft tissue, the German version (either DM41 or DM41A1) tended to yaw quickly and fragment.  Yet the 1992 German Law of War manual stated, “It is prohibited to use bullets which expand or flatten easily in the human body,” following the 1899 Hague Declaration text (to which Germany is a party), but included “projectiles of a nature to deform while penetrating the human body [or] to tumble early in the human body,” language apparently provided by International Committee of the Red Cross representatives who at the time were engaged in an effort (subsequently halted following unfavorable peer reviews) to create more restrictive post-Cold War rules for military weapons and ammunition.  When informed by the present author of the manual language contradiction with German military ammunition terminal ballistics, the manual author admitted he was unaware of it, having failed to consult with German military ammunition specialists.

The ammunition displayed in Dr. Fackler’s article was replaced in the early 1990s by the Patrone 7.62×51 DM111 (steel jacket with gilding metal plating) and DM111A1 (gilding metal jacket).  Type classified in October 1992, two months after publication of the German manual, the DM 111 was the result of efforts to develop environmentally friendly ammunition to reduce harmful emissions generated through the primer and the projectile’s exposed lead core.  The lead acid primer was replaced with a “green” primer and the exposed lead core was capped with a closure disc.  No bullet fragmentation was observed in German ballistics test shots at twenty-five and fifty meters.  A 2012 U.S. test of DM 111 ammunition fired into ballistic gel at ten meters (the same distance at which Dr. Fackler tested ammunition) resulted in projectile fragmentation, including separation of the closure disc from the projectile base.

It is not the author’s intent to criticize German ammunition or suggest it violated the 1899 Hague Declaration.  The anecdote was offered to illustrate a lack of working knowledge by some with respect to history and a failure to consult with subject-matter experts prior to arriving at what may prove ill-founded conclusions. History provides numerous examples prior to and following the 1899 Hague Declaration of fragmentation of military rifle-caliber ammunition in soft (human) tissue.