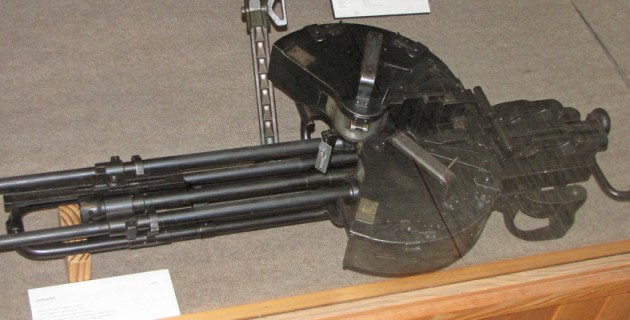 ABOVE: Japanese 100-Shiki: a gas-operated, stripper-clip-fed aircraft twin MG.  One wonders just how much sake one would need to drink to come up with a monster like that and expect it to operate in the deep-freeze and topsy-turvy conditions of aerial combat.

Almost lost in a sea of plastic-fantastic new-wave “museums of idea, not objects” resplendent in touch-screens and 3D displays, but lacking substance and exhibits, in Germany there is a besieged island of a good, old time museum close to bursting its seams with the most fascinating hardware; a variety and quality of which is getting harder and harder to find.

If the winds of good fortune should ever sweep you across the pond to Europe, and you love arms of all types, make sure you got a spare day to spend in beautiful and ancient (it used to be a Roman Legions garrison city) Koblenz, a city at the junction of the Rheine and Mosel rivers, in the state of Rhein-Pfalz, about 100 km (60 miles) northwest of Frankfurt/Main.

Koblenz is the seat of the German Bundeswehr logistics service, known formerly as the BWB (Federal Office of Military Technology and Procurement), nowadays re-christened into a real mouthful of an acronym: BAAINBw (standing for Federal Office of Bundeswehr Equipment, Information Technology and In-Service Support).  Never mind the name, in 1962 the office started a study collection of war materiel, collecting and researching German and foreign military hardware, teaching Bundeswehr soldiers the ins and outs of foreign (Warsaw Pact) equipment – and of course comparing German equipment with foreign ones with an eye towards what can be copied and/or improved to make the Bundeswehr combat load and hardware better. The first 1892 prototype of the Bergmann pistol, designed by Louis Schmeisser (father of Hugo of SMG and Sturmgewehr fame). The early repeating and automatic pistols collection of the WTS is something one has to see to believe.

Soon, historical examples started to flow in as well, and in 1982 the combined influx of old and new artifacts made the BWB collection burst at its seams with both paper-pusher’s and collection items.  Thus, a new location was found, and the WTS (Military Technology Study Collection) moved out into a freshly vacated pre-war Langemarck Barracks at Meyenerstrasse 85-87.  There at last, a fixed exhibition was organized, and with the influx of new and old artifacts, the character of the collection steadily started to change course from strictly utilitarian towards more scientific.

The Nepalese hand crank-operated Birendra (Bira) machine gun is a reverse-engineered Gardner Gun fed from a top pannier magazine. Just one of the 50+ non-automatic machine guns on display at WTS.

Though the collection was initially off limits to civilians, that changed with time and at the beginning of the new century everybody could see the collection upon inquiring by telephone 24 hours in advance to make sure the collection was open on the targeted day.  Nowadays you don’t need even that: you just get there, any day of the year, except for Easter and Christmas weeks, between 9.30 AM and 4.30 PM, pay a mere 3 Euro and you’re in.  A practical note: make sure you have and use Euro coins.  This is a minimum-maintenance museum, meaning that you don’t normally meet a single member of the staff during your entire visit and no one is breathing down your neck when you’re lusting over some arcane handgun.  There’s no cashier desk to sell tickets, no credit cards (major or otherwise) are accepted – you just go to a gate with a turnstile and a slot machine.  Deposit your three Euro in coins into the slot, and a turnstile can be pushed out of the way to admit one.  Don’t develop any stupid ideas, though – from the moment you enter the Barracks you’re under constant CCTV surveillance.

In 1970 the Rheinmetall company tried to put its foot into the German individual rifle door, then as now, firmly stocked with HK weapons. The company tried to introduce the 5.56mm weapon, and decided to make it advanced enough for the Bundeswehr to be unable to overlook it. However, they were unsuccessful because the rifle was deemed too modern – guess the plastic receiver and optically-sighted bull-pups were not yet all the rage...

The WTS is an overwhelming mega-museum.  It displays a stupefying amount of everything a soldier would ever touch during his/her stint in the military: from underwear and uniform, to mess kit, to service piece, to tanks, artillery, jet aircraft – all the way to a midget submarine.  And all this had to be crammed into the display area – even though there’s 75,000+ sq ft of it.  Practical note #2: To secure maximum viewing pleasure, one is well-advised to not have any accompanying personnel who are not inclined to truly appreciate the hardware.  Just leave said personnel at a hotel to see the city, or if your credit card would survive such extremes, at a local mall, and take a day off from your vacation.  There’s enough there for a true military technology aficionado to spend an entire day 09:30 to 16:30 at the museum without a single moment of boredom.  But people not bitten by a hardware bug would find little for entertainment, would be terribly bored, and would spoil your delightful technical vacation.

A prototype Walther G43 model chambered for the 7.9mm Kurzpatrone fed from a Sturmgewehr magazine.

The ground floor has halls with tanks, vehicles, field artillery, flak artillery, heavy artillery (up to and including Hitler’s 240mm K3 supergun), radars, searchlights, noise-locating gear, engines, helicopters, aircraft, torpedoes, sea mines, depth charges, generators, bridge-building pontoons – just about everything that’s heavy and military.  The engine collection is really fascinating, including e.g., Jumo 205 aerial counter-stroking diesel engine that powered the Junkers Ju-86 bomber, or the masterpiece of Soviet engine design, a radial maritime 503A diesel engine comprising 7 banks of 6 cylinders each, numbering 42 cylinders in all.  It is hard to imagine the shape of the crankshaft that thing needed…

The second floor has halls upon halls of uniforms and personal equipment.  At the time of my visit there was a very interesting temporary exhibit of soldier pocket knives from the 19th century onwards showing examples starting from pen knives through the Swiss Army Knife from its humble beginnings until present day multitool “pocket tool boxes.” 9mm Walther AP (Armeepistole), a P.38 predecessor with internal hammer. This is the semi-compact size with the shortest (3 in.) barrel.

Then there’s light and anti-tank artillery, machine guns, machine cannons, Gatlings galore, from camel-gun to the GAU-8/A, including a very interesting selection of Soviet Gatlings, both engine-driven and automatic – and they had automatic multi-barrel guns, mostly aerial, starting at 7.62mm to .50 cal. (YakB-12.7 as mounted under the front cockpit of the Hind-D helicopter gunship), to 23 and 30mm (AK-630 maritime anti-aircraft 30mm water-cooled Gatling: the 6-30 in this designation stands for 6-bbl, 30-mm).  Apparently the Soviets wanted their Gatlings independent of electric power and instead they opted for gas-operated guns.  The GShG-762 on display in WTS is actually a cross-over between the power-driven and automatic: it uses an electric motor to load belt and fire first shot – and then powder gases take over.  This was meant to be an improvement over the YakB-12.7, using electric-primed pyrotechnical propulsion cartridges to propel the gun for the first shot.  The gun was loaded with a six-shot cylinder (actually an in-line harmonica-shaped magazine) of propelling rounds, and the pilot had to use his ammo supply in six bursts – or else he was unable to shoot it all out.  So afterwards, in the smaller caliber gun, the pyro starter was replaced with an electric motor – hence the cog wheel around the barrel cluster.  At the opposite end of the spectrum the WTS has acquired one of the late 1800s Nepalese Birendra (Bira) twin-barrel pannier-fed hand-cranked guns utilizing a copy of the Gardner Gun system. The machine gun hall houses a most comprehensive collection of machine guns.  There are regular service models, their prototypes, never adopted test pieces and more.  Things like the 100-Shiki rifle-stripper clip fed aircraft (!) gas-operated machine gun.  There are a lot of Japanese aerial armaments there, things like the Ho-301, a 1940 caseless 40mm engine cannon for fighter aircraft, the 20mm cannon series based on .50 cal. Browning design, the 92-Shiki and 98-Shiki aerial flexible guns.  From the Germans’ unique designs, you can see the TuF-MG, which is the world’s first HMG, a 13mm Maxim chambered for the T-Gewehr ammo.  There are also two Knorr-Bremse prototype MGs, as well as Krieghoff’s prototype aerial MG and Krieghoff’s prototype contender for the FG-42 paratrooper’s rifle. Blooper Tube with a difference – a three-shot repeating China Lake variant of the M79 grenade launcher.

The third floor houses the military communications gear and an interesting exhibition of aircraft instruments, and then you get into the attic and you think you came to heaven: the attic holds a knock-out exhibition of individual small arms, from double shot-single barreled flintlocks all the way to the HK XM8 and underwater P11 pistol.

Mars pistol?  Check – and not only one, but two different models: the 1900 Webley Mars and 1906 Consortium Mars.  And Whittman’s Webley & Scott 1903 pistol for better measure.  Bergmann pistol?  Check – with at least a dozen models from the 1892 prototype of the No. 1 pistol up until the Danish 10/21 Bergmann.  A Colt Model 1900 sight-safety Parallel Ruler?  You bet – USN s/n 85.  The repeating pistols – anyone ever seen a repeating pistol?  And I don’t mean the Remington XP-100 sawed-off rifle, but 1880s and 1890s military prototype repeating pistols, mostly Austrian and German.  They have them all, Volcanics, Bittners, Laumanns, Schillings, Schoenbergers, Schulhoffs – you name it.  Trivial stuff like Broomhandles, Lugers, Tokarevs, or P38s hardly deserve a notice and a photo.

Unfortunately, the photography conditions are the only thing that truly detracts from an otherwise 100 percent enjoyable visit at the WTS Wonderland.  The exhibits are either too cramped or set behind greasy fingered glass, which reflects either the fluorescent tube lights, or your flash, or (most times) both, and then the attic section has glass panels with security wire molded in, and they also blink in your flash.  However, if you’re not making photos, but just using your Mk I eyeball, you can see anything and everything quite well. This museum is not only an excellent value for the price of admission, but is exceptional in its variety, rarity and comprehensiveness of its collection.  For people interested in this sort of thing, there will probably be a strong urge to return at the first possible occasion.