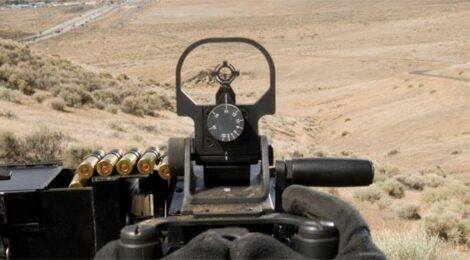 The United States Government (TACOM) has just announced an order has been placed with U.S. Ordnance, for 548 M2HB Flex .50 caliber machine guns. SADJ is pleased to bring the story of US Ordnance’s “Ma Deuce” to our readers as the US Government is gearing up its inventory.

U.S. Ordnance is a woman owned manufacturing defense contractor located in McCarran, Nevada, just outside of Reno.  U.S. Ordnance is rated as a small business, and they are “cutting chips” daily and manufacturing is in-house.  Among their other products such as the M60E4/MK43 machine guns, they manufacture their M2HB .50 caliber machine guns in their new 68,000 sq. ft. manufacturing facility.  With newly purchased state-of-the-art equipment and an indoor firing range, U.S. Ordnance has the ability to accurately and efficiently produce and test their products to the industry’s highest standards and the company is ISO 9001:2000 certified by DNV.  Using the latest manufacturing techniques, U.S. Government monitoring and responsible sales ethics, they deliver reliable and comprehensive products and services to their customers.

U.S. Ordnance manufactures and provides firearms that are extensively tested, safe, and battlefield proven effective.  In April 2000, U.S. Ordnance was licensed by Saco Defense (now General Dynamics Armament and Technical Products, Inc.) to manufacture the complete line of M60 machine guns.  The initial licensing agreement transferred the contractor owned technical data, processes and procedures, contractor owned tooling, gages and fixtures to U.S. Ordnance.  In February 2006, the balance of the required Government owned production tooling used on the M60 machine gun was transferred from Saco Defense to U.S. Ordnance.  Since then, U.S. Ordnance has manufactured thousands of complete M60 machine guns (models M60E4, M60E3, and M60D) for the U. S. Government and other commercial and foreign contracts.  Starting in early 2007, they started developing their M2HB machine gun.

All U.S. Ordnance products are developed and tested to NATO specifications and made to the original technical data package.  A critical consideration for the company was maintaining those original specifications.  U.S. Ordnance customers benefit from extensive environmental endurance testing, such as drop tests, ice, mud and water immersion, to deliver the most reliable firearms.  Each U.S. Ordnance machine gun produced undergoes proof firing, as well as function and accuracy testing before it leaves the factory.  This 100% testing ensures quality control.  Due to the success of their firearms worldwide and current production for the U.S. Government, U.S. Ordnance can assure availability of replacement parts in the future.  In addition to their M2HB and M60 line they offer the M16/M4 variants, M203 grenade launcher, and M40A3 sniper system.

M2HB Background
The M2HB .50 caliber (12.7x99mm) is an air-cooled, belt-fed, machine gun that fires from a closed bolt, operated on John Browning’s venerable short recoil principle.  This weapon system first went into design in the early 1920s, and was in full use by the mid-1930s.  Affectionately called “Ma Deuce,” it fought through World War II, Korea, Vietnam, countless wars and conflicts around the world including Iraq and Afghanistan today.  The current iteration of the M2HB is capable of both sustained automatic and accurate single shot fire.  The M2HB machine gun is used extensively as a vehicle, boat, helicopter or aircraft mounted weapon by the United States and most NATO countries.  Ammunition may be fed from either the left or the right side of the gun making it suitable for use by both infantry and in armored vehicles.  The M2HB is in service with the U.S. Military and the armed forces of over 23 nations and is the world standard in heavy machine guns. 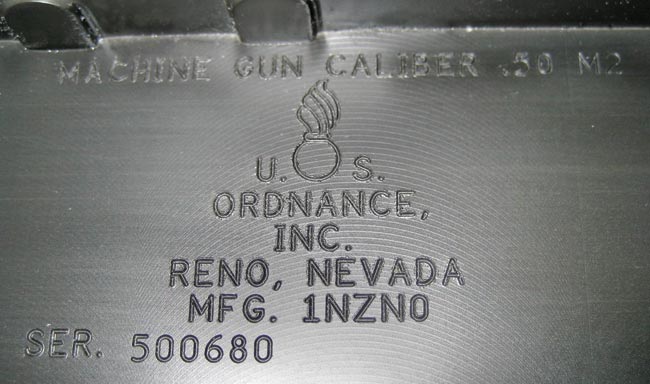 U.S. Ordnance understands the importance of ensuring interchangeability for mature weapons systems such as the M2HB.  They have already successfully demonstrated full interchangeability for the M60 weapons system with those produced by Maremont Corporation and Saco Defense.  Their ISO established processes, procedures, quality assurance controls, production testing, and methods of manufacture ensures the level of quality required for all components of the M2HB machine gun are also maintained.

Production Capabilities
In 2007, Norman Justice (see sidebar) and U.S. Ordnance senior management agreed to fund development of a U.S. Ordnance M2HB weapon system.  The initial stage involved designing and building the necessary tooling and fixtures required to assemble the various components and design and ordering of the tooling to produce the required castings and forgings.  This process required four full-time tool and die makers to develop and build tooling and production fixture and inventories of $2.5 million worth of weapons grade material, castings, and forgings were ordered.  In 2007, the economy was booming, metal prices were at an all time high, and weapons grade metal castings and forgings took 28 weeks from order to delivery.

This building expansion occurred at just the right time because over $5 million worth of new equipment dedicated to their M2HB production was starting to arrive.  Their prior facility did not have sufficient floor space for this larger equipment and they had exhausted their available electrical supply.  This new equipment under Norman Justice’s guidance and prior experience was grouped into cells and dedicated to their M2HB and/or M2HB subcomponent production.  In layman’s terms this translates into very accurate volume production.  In most cases these cells run 20 hour shifts, five days per week.

In September 2008, U.S. Ordnance received a contract from TACOM-RI for 859 Non-standard M2HB for Afghanistan.  This contract had an aggressive delivery schedule with the first delivery occurring just 60 days later in November.  While actual monthly production figures are confidential SADJ was able to confirm that U.S. Ordnance delivery schedule of 100 per month is current.  In addition to this they have supplied several foreign allies with undisclosed quantities of M2HB weapon systems on DSP-5 export license as part of their direct commercial sales program.

Another product improvement developed by U.S. Ordnance is their improved sighting system.  With its simplicity of use, the user can concentrate on the target allowing for rapid target acquisition.  The large heads-up ballistic compensation knob can quickly be changed without losing eye contact with the target, and can be accomplished even while wearing gloves.  An integrated Mil-Std 1913 Picatinny rail allows for mounting optics, IR or visible lasers.  The front and rear sight fold out of the way for a clear sight picture when using optics or aiming devices.  Any U.S. made M2HB can be retrofitted with the U.S. Ordnance improved sighting system.

Small Arms Readiness Evaluation Team with Repair (SARET-R)
U.S. Ordnance offers their customers a Small Arms Readiness Evaluation Team with Repair (SARET-R) program.  U.S. Ordnance technical experts supplement existing customer SARETs by assisting in the inspection and maintenance of their small arms.  As a manufacturer, U.S. Ordnance can supply just-in-time components necessary to maintain and repair their customer weapons systems.  “Ensuring proper function and safety of our customer’s military equipment is an essential part of our service offering,” said Daniel Fassler, Director of Operations.  “We have assisted our customers in developing SARET-R programs around the world and have helped to dramatically increase their overall weapons readiness.”

U.S. Ordnance has achieved large-firm M2HB manufacturing capability while maintaining the small-firm customer focus that has made their M60 program so successful.