Browse: Home   /   The Caracal Pistol: A New Animal for the Firearms Professional 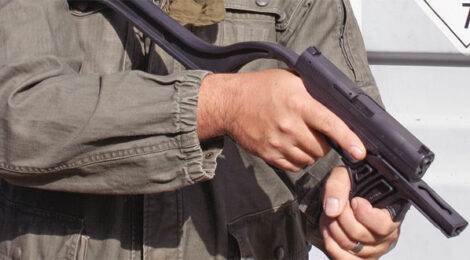 The Caracal Pistol: A New Animal for the Firearms Professional

When Small Arms Defense Journal was contacted to see if we were interested in testing the initial batch of Caracal pistols imported into the United States, we enthusiastically accepted.  When we were told we would also be receiving the very first Caracal Model F registered as a Short Barreled Rifle in the nation, well, we were delighted.

Background
Caracal International, based in the United Arab Emirates (UAE), started in 2002.  Led by a team of European weapon designers the goal was set to develop a new pistol using state-of-the-art technology and materials.  After undergoing a long period of R&D, a test certificate was issued in 2006 certifying the Caracal pistol to be in compliance with the NATO D14 standard, the TA Police Standard and the Federal Armed Forces Technical Purchasing Requirements.  It was time to introduce the innovative new pistol to the rest of the world.  Among the many International trade shows it would soon appear in, they included ADIHEX 2008, IDEX 2009, EXA 2009 and most recently, S.H.O.T. Show 2010 in Las Vegas, NV, USA.  Shipments into the United States are just beginning as we are penning this article.  They are being imported by Waffen Werks of Knoxville, TN, USA and marketed by Caracal USA, also of Knoxville, TN.

Design Features
The Caracal pistols are synthetic frame, high capacity handguns with a short double action trigger system.  While the standard firearms do not have an external safety or decocking lever, at some point in the future they may offer a model with an external, push-button safety located above and to the rear of the trigger.  Some utilize a unique sighting system and all have a “cocked action” indicator at the rear of the slide.  There is also a loaded chamber indicator by means of a small “window” at the rear of the barrel where a round can be observed from the top if the chamber is loaded.  They feature an ambidextrous magazine release and an accessory rail directly in front of the trigger guard.  They have similarities to many different handguns on the market, but they feature their own low-axis barrel system to reduce recoil.  The magazines are a double-stack design with single round presentation for precision feeding.

The bottom of the trigger guard with the importer markings from Waffen Werks in Knoxville, TN.

Caracal Pistol Variations
At the time of this writing there are 3 models available.  Those evaluated by SADJ were all chambered in 9x19mm although they will also be available in 9x21mm, .357SIG and .40S&W.  The Caracal F is the full size version.  With an unloaded weight of only 26.4 ounces (750g) the 9x19mm boasts a magazine capacity of 18+1 rounds.  The barrel length is 4.09 inches (104mm) with a sight radius of 6.2 inches (157mm).  The sights are a blade in front with a single white dot and the rear sight is a fixed “notch” with another single dot below the slot.  The Caracal C is the compact model with a magazine capacity of 15+1.  Unloaded weight is 26.1 ounces (740g) and the barrel length is 3.6 inches (93mm).  The front sight is the same blade with a white dot but the rear sight is quite unique.  With a radius of only 1.7 (43mm) inches between the rear notch (no white dot) the position of the rear sight is what makes it stand out.  The rear sight is located 4.3 inches (109mm) from the back plate of the firearm, directly in front of the ejection port.  While it was met with mixed concerns on our initial handling, it was found to be quite effective and we will go into more details in the performance section of this article.  The newest model is the Caracal SC.  This sub-compact version weighs in at 22.94 ounces (650g) and sports a 3.3-inch (86mm) barrel.  The magazine capacity is reduced to 13+1 rounds, with a slightly longer 15 round magazine with integrated finger groove available.  Like the other models, it will also accept the longer magazines of the Model F and Model C when capacity is of more concern than concealability.  As of this writing the Caracal SC does not meet the importation “points count” for the United States so it is currently not available for retail sale.

All pistols have a short rail integrated into the frame in front of the trigger guard for attachment of accessories including laser sights, lights or grips.  The trigger mechanism is a short double action and all have a visual indicator at the rear to show when the pistol is cocked and ready to fire.  The trigger pull comes in at approximately 4.8 pounds (2.2kg) with .31 inches (8mm) of travel.  While all have the ability to accept a locking front grip accessory (if previously properly registered as an A.O.W. with the BATFE) the Caracal F also has a notch at the rear of the receiver to accept a factory stock (when registered with BATFE as a short barreled rifle). 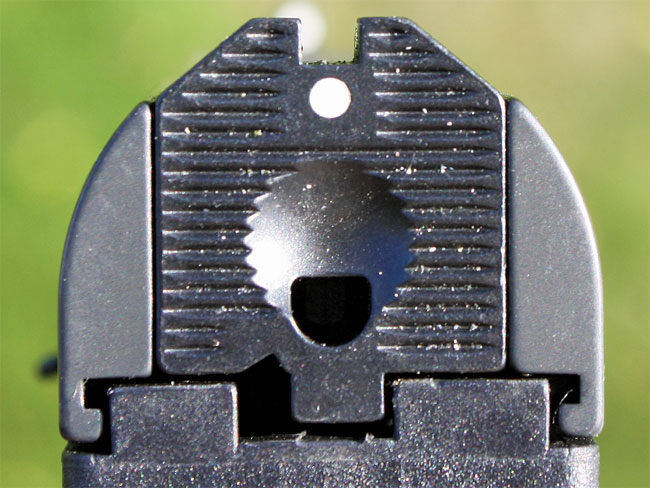 View of the rear of the Caracal F.

Range Time
We visited the test range accompanied with several hundred rounds of ammo, a PACT MKIV Pro chronograph and timer and plenty of targets to collect data.  Before setting up any equipment, all shooters in attendance wanted to fire a few magazines to get a basic feel for this new platform.  The sight system of the Caracal C raised the most curiosity and shooters lined up to spend some time with this pistol first.  The SBR Caracal F with the shoulder stock was equally as intriguing and also got plenty of attention.  After a brief introductory period where we started counting rounds for a basic function check, we set up some equipment and started collecting data.

The first day out we had four very experienced pistol shooters.  Initial testing started with the Caracal C followed by the Caracal F and lastly the Caracal F with the shoulder stock.  Testing was conducted at the Small Arms Research Test Facility in Maine and accuracy shooting was recorded at a distance of 10 yards.  Targets were standard “Q” targets and blank sheets with a 3-inch red dot for an aiming point for each configuration.  One 10-shot group was fired at each dot by each shooter on their own target to see how each configuration change affected their shooting.  It is a good comparison exercise because all the variables are the same except for the actual pistol or configuration being used and the groups are all clearly defined while close enough to be used for comparison.

There is a difference in the design of all of the Caracal guns that lessens the muzzle rise.  They are designed so the centerline of the barrel is closer to the hand.  This makes controlled pairs (previously often referred to as “double-taps”) easier and faster with no loss of accuracy and shot placement.  This low centerline is a very important part of the Caracal pistol system and should prove popular to many who try the system.

Phase 1 – Accuracy
Ammo used in the first round was standard Winchester “White Box” 115gr FMJ.  It was duplicated with Wolf 115gr FMJ and Federal American Eagle 147gr FPJ.  None of the firearms ever malfunctioned at any time and the results were very similar for all types of ammo.  The smaller Caracal C model performed extremely similar to, and in a few cases even superior to the full size Caracal F model.  All groups tightened considerably when using the stocked (SBR) Caracal F.  Many of the groups were so tight they showed little evidence of 10 rounds being fired.  The addition of the stock left no doubt at the enhancement in performance with the sturdy hold it allows.