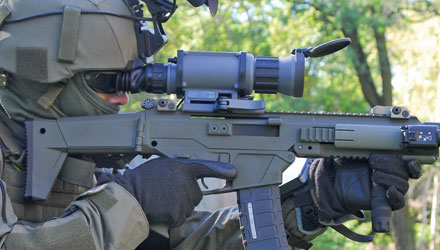 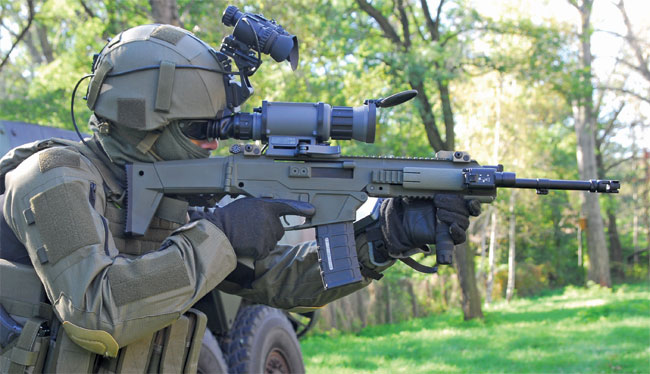 Designing “Future Soldiers” space-age suits of armor with TV and other creature comforts has been a popular fad since 1950s, but only in the last decade have such projects significantly moved from concept into the mainstream.  Latest advances in microelectronics, mechanics and ergonomics, coupled with shifting the emphasize from the tanks and missiles back towards individual soldier as a result of the end of the Cold War and in accordance with the ‘asymmetric warfare’ doctrine, brought about Future Soldier projects popping up everywhere.

Historically, the first of the New Breed space-age-soldier-coming-to-a-forest-near-you programs to lead the pack was the U.S. Land Warrior, originating in the early 1990s, only to die and then restarted from scratch as the Future Force Warrior in 2007.  The basic elements and requirements didn’t changed much since then: the resulting suit of electronics was deemed to integrate the individual small arms with high-tech equipment, provide the infantry soldier with advanced “communications, command and control” (C3) or even “communications, command, control, computers & intelligence” (C4I) systems at grass-root level – all that within the effort to look at the individual infantry soldier as a complete unit rather than just as a tiny cogwheel of a larger force.  Since the 1990s one more element was added: armor, both soft and hard plates, protecting the soldier from enemy fire, integrated into load bearing vests.

By 2008, when the Future Soldier Fairs began in Prague, Czech Republic, everybody had an FS project of their own.  The list is already overwhelming and seems to swell with every Google search.  Today there are at least 19 such programs going on, on four continents.  In Europe there are German IdZ, French Féline, Spanish COMFUT, Italian Soldato Futuro, British FIST, Swedish MARKUS, Swiss IMESS, Norwegian NORMANS, Czech V21, and Polish Tytan/Uhlan 21.  In the Americas, aside from U.S. FFW, there are Canadian ISSP, Mexican Xiuhcoatl, Chilean Aguila and Brazilian COBRA.  Australia has Land 125, and in Asia, there are Indian F-INSAS, Japanese V-Operation, ACMS of Singapore and who-only-knows-what in China – for the upstart regional superpower sure has something of their own.  And the counter keeps ticking… 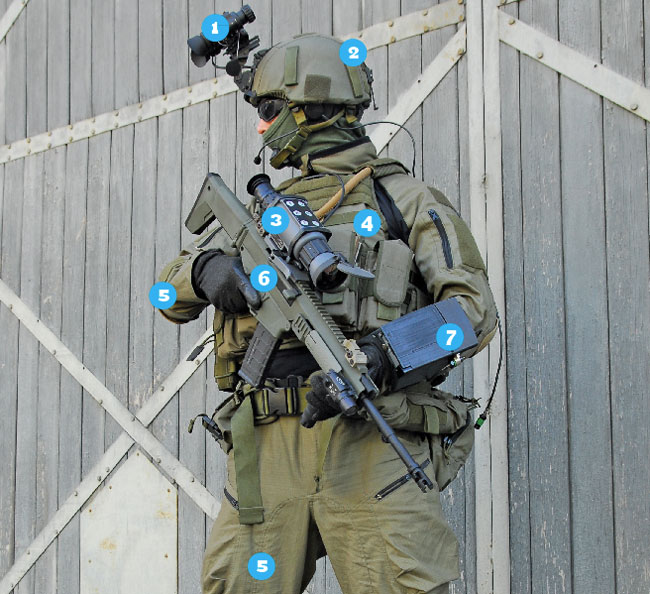 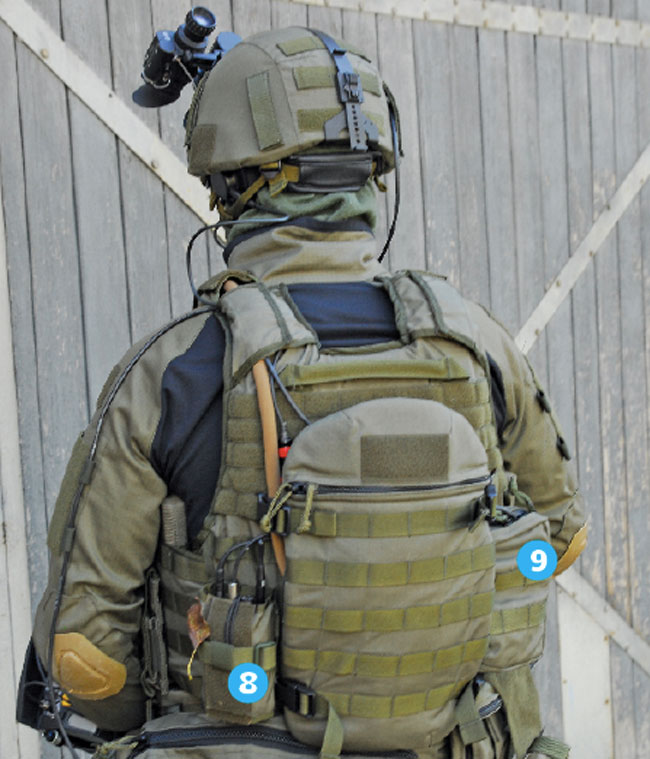 Bumar’s Lancer
Polish Future Soldier project started first in 2006, with CNPEP Radwar of Warsaw, called the Uhlan 21, and generally based upon know-how of the French electronics giant SAGEM, partnering with Radwar, which was a big name but rather in air defense radar business – not particularly a ‘B3’ (beans, boots and bullets) specialist, catering to the individual warrior.  The first generation Uhlan was first presented at the aforementioned Prague Future Soldier Fair in 2008, and since then has significantly advanced.  This was possible when Radwar’s initiative was taken over and expanded by the Bumar Group, which took the issue very seriously – to the extent of creating a whole new core business division around it.  In 2009, a Uhlan 21 consortium was created for developing the Future Soldier system for the Polish Army, which meanwhile became official, and christened with a cover name ISW Tytan.  ISW stands for Indywidualny System Walki, or Individual Combat System.  According to a tradition dating from late 1970s, all Polish soldier-level projects have their cryptonyms derived from elements of the Mendeleyev periodic table.  Tytan means titanium, Ti, a metal with atomic number of 22.  The Uhlan 21 consortium consists of the originator, Radwar, as well as small arms (Fabryka Broni Lucznik-Radom and OBR SM Tarnow), optoelectronics (PCO SA), grenade-launcher and 40mm ammunition (ZM Dezamet SA), and small arms ammunition manufacturers (ZM Mesko SA), ballistic protection and combat clothing provider (PSO Maskpol SA), as well as non-Bumar entities, like Polish communication systems leaders Radmor SA and WB Electronics, Military Technical University, Military Aviation Medicine Institute, and Military Hygiene and Epidemiology Institute.

The name Uhlan comes from traditional Polish cavalry – the lancers – patterned after the Tartars, whom Polish forces fought in the 16 and 17th Centuries on the Polish-Turkish frontier lands, deep into today’s Ukraine.  In their language ‘ughuan’ meant ‘the Brave’ and so were their daredevil deeds on the battlefield.  The uhlans, light cavalry fighting with sabre, lance, pistol and swift maneuver, revolutionized the 17th Century European military doctrine, administering a coup de grace to the concept of heavy cavalry tracing its heritage all the way back to medieval knights in shining armor.  Father of the U.S. Cavalry, Casimir Pulaski, was an uhlan, and his tactics written for his American trainees had a typical daring and dash to it.  Yet their real moment of glory came during the Napoleonic Wars, when ‘los infernos picadores de Polonia’ decided the outcome of many encounters in l’Empereur’s favor, especially in the Peninsular War.  Soon copycats sprang out throughout Europe, and Polish-inspired uniform parts like “ulanka” (cavalry jacket) or “czapka” (square-topped cap) were en vogue, becoming de rigueur parts of the colorful 19th Century military fashion.  This is a deeply meaningful name, then, for a Polish project meant to revolutionize the country’s military. 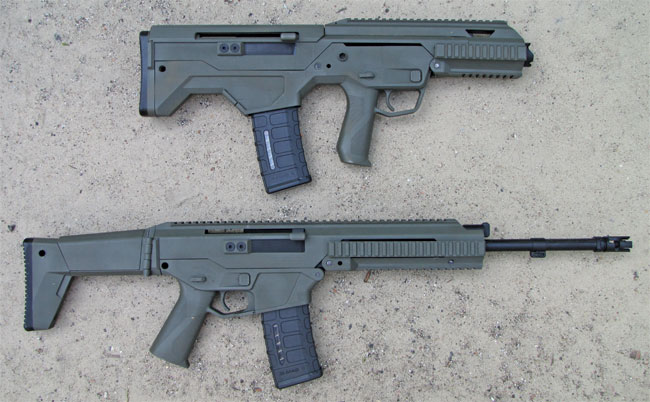 The Future Soldier program is an interdisciplinary effort, touching on all aspects of soldiers’ life and fighting.  It entails a thorough modernization of hardware, careful selection of professional soldiers, upturning the heretofore organization and training, as well as command and logistics.  The Tytan is only a part of it, but an important, if not a crucial one.  It calls for a wholly renewed outlook on the soldier, the ability to assist his mental and physical abilities with modern hard- and software, by placing him as a part of the net-centric battlefield.  This is an attempt at the ‘soldier-centric’ approach to the combat.

The Future Soldier’s equipment is meant to be a coherent ergonomic system, meant to assist the warrior and his mission.  The modern equipment is not only a new set of flashy gadgets slapped-on to a half a century old rifle – it is rather a whole new approach to the well-being and efficiency of a soldier.  This means also soldier-friendly clothes, ballistic and NBC protection, novel small arms with intelligent munitions, surveillance and reconnaissance capabilities, and the whole new suit of command and control gear complete with a hand-held computer to integrate it all.  The real challenge is to make it perform to do all of that – and then to make it as much as possible locally-manufactured and decently priced, while still cutting a profit.

The Phase 1 of the Uhlan 21/ISW Tytan development came to conclusion on November 31, 2010.  More than 100 scientists, technicians and experts, military and civilian, from various government institutions and private industry, as well as academic circles, have already took part in the Phase 1.  Their expertise and practical knowledge ranged from medicine, to ordnance, munitions, uniform, protective suits, communications, reconnaissance and command, all entwined with the new technologies, IT – the ‘nerd stuff.’  The results are already going beyond what was planned at the beginning.

Tags: “czapka” (square-topped cap), “ulanka” (cavalry jacket), 2011, Leszek Erenfeicht, Uhlan 21, V3N3, Volume 3
← Sharpshooter: The UK’s New L129A1 7.62x51mm Rifle
AUSA 2010 →
Distributed at trade shows worldwide, Small Arms Defense Journal is a bimonthly publication that focuses on small arms, accessories, gear for the soldier, new products, industry news, and defense trade shows. The first issue of SADJ was Spring 2009, which launched at the LAAD show in Rio de Janeiro, Brazil. SADJ (pronounced “sage”) is targeted toward military, law enforcement, and defense industry professionals. Our job is to reach these groups and tailor content to their interests while producing a publication that is applicable to an international audience.