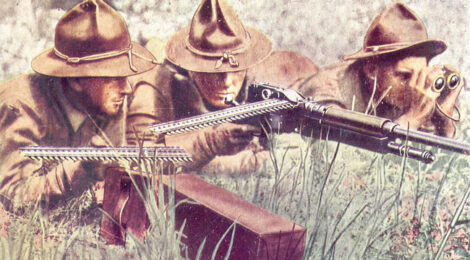 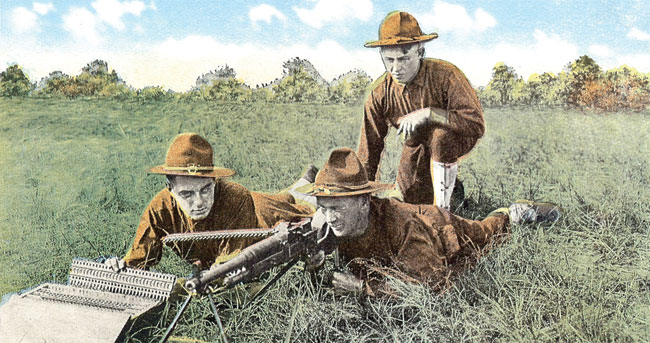 Each rifle was furnished with feed strips made of sheet steel, spring tempered, by means of which the cartridges are fed into the rifle.  Each feed strip is designed to hold 30 cartridges.  The ammunition box is designed to hold 10 loaded feed strips (300 cartridges), and is made of seasoned white oak or ash.  It is about 18 inches long and nearly 8 inches wide.  The end and sides are dovetailed together, and the bottom is secured by screws.  The body contains five longitudinal partitions, in each of which can be placed two feed strips.  The lid is held closed by the lid catch.  On the left end of the box and the front side are leather handles.  The seats for the handles are recessed so the handles will be flush with the sides of the box.

The machine gun and its tactical use were new and unproven in the first decade of the twentieth century.  Major General Julian Hatcher, in his book Hatcher’s Notebook, best describes the tactical role of the machine gun and how it was put into service.  “Now if at that time we had known the least thing about the tactical role of machine guns, we would have realized that we ought to have two kinds in the Army at the same time; the heavy type for one kind of action and the light type, for a totally different use.  We didn’t, however, realize this or anything else much about these matters, so we adopted this light gun as THE machine gun of the Army.  In those days, every regiment had a machine gun platoon, made up by detailing men from regular companies for temporary duty in the machine gun platoon.  This platoon had four guns.  It was a regular authorized company, but just a scraped together aggregation of men who could best be spared from their places.  Many times the temptation to get rid of wanted problem children was solved by company commanders by sending them to the machine gun platoon.  A pretty sorry outfit it was, as a rule.”

The Automatic Machine Rifle, Model of 1909 “Benét-Mercié” was not a bad gun but was ill suited to be the main machine gun of the U.S. Army, though this was the historic roll it played from 1909 to 1916.  It was finally realized that different types of machine guns were needed for different tactical roles.  The Model of 1909 was relegated to training use during World War I being declared obsolete in 1918 and ultimately superseded by the far superior Model 1918 Browning Automatic Rifle (BAR). 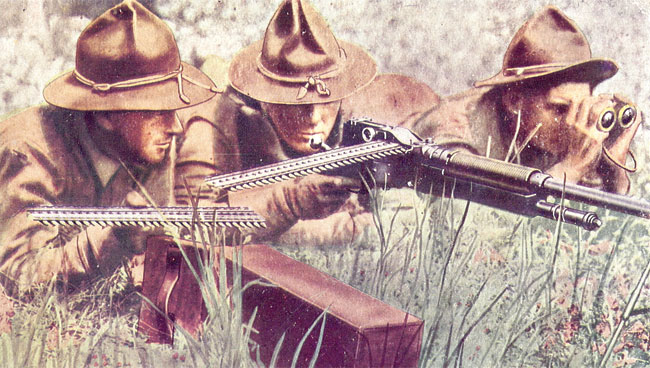 U.S. Cavalry troops practice with the Model of 1909 in Harlingen, Texas at the first U.S. machine gun training school in 1917.

The Model of 1909 saw limited use in a tactical role at the landing at Very Cruz in 1913.  Then one day in 1916, all hell broke loose and the gun acquired a reputation for unreliability that to this day has cast a dark shadow over the gun.

In April, 1916, the Mexican bandit Pancho Villa staged a sneak attack across the U.S. border, raiding the small town of Columbus, New Mexico three miles north of the U.S. and Mexican border.  The raid on Columbus occurred in the middle of the night and caught the sleepy town completely by surprise.  No one was expecting an attack.  There was a small garrison of U.S. Cavalry stationed in Columbus with a machine gun platoon consisting of four Model of 1909 machine guns which, when routed from their sleep, managed to collect themselves and their guns along with ammunition and began to take defensive positions.

Some civilians and soldiers were killed in the ensuing battle and reports emerged stating that none of the Model of 1909s were able to operate reliably during the course of the fight.  Afterward, the excuse given by the machine gun crews was that the night was so dark they had trouble with the complicated loading and feeding of the weapon.

The newspapers of the day, already horrified that the attack even occurred in the first place, jumped on this information and raked the U.S. Army and the Chief of Ordnance over the coals declaring that the rules of warfare should be changed so that battles would only take place during daylight hours so that our machine guns could take part in the action.  The newspapers called the Model of 1909 the “Daylight Gun” for this reason and wrote many scathing and satirical articles on the subject. 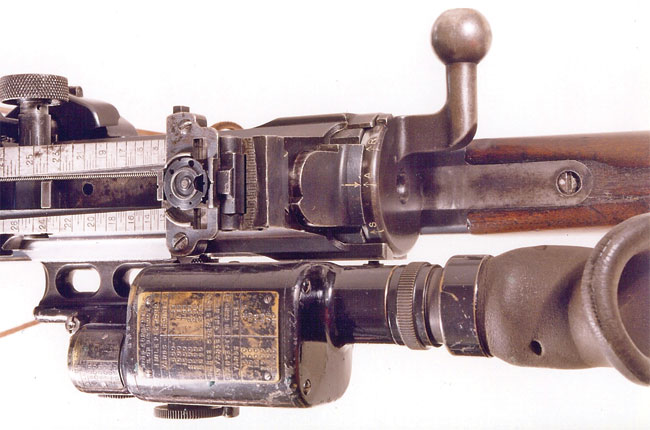 The rear leaf sight is adjustable to 2,800 yards and is also adjustable for windage. The Warner & Swasey Model of 1908 telescopic musket sight is located on the left side of the receiver. Note the wind and range table and drift table attached to the top of the sight.

However, in an article published in the November 10, 1917 issue of the Saturday Evening Post, Hatcher, then a Captain, made the following statements.  “The night was dark, and naturally some trouble was experienced with the guns.  Occasional jams occurred; but in each case the trouble was overcome and the guns continued in the fight.  At least two of the four guns were always in action.  These guns were not always firing though, as they frequently had to stop for lack of a suitable target.

“To fire machine guns in the dark streets of a town without a well defined target,” Hatcher continued, “is to risk killing friend as well as foe.

“There were may highly excited people present, however, and to these it no doubt seemed that all the guns should be firing, regardless of whether an enemy was in sight or not.  Thus, it happened that a report started that the machine guns were not a decisive factor in saving the town; and in spite of occasional jams, they fired nearly 20,000 rounds of ammunition in the fight.”

The result of this controversy resulted in the Army re-evaluating the heretofore haphazard methods of training and then establishing a proper machine gun school.  The former machine gun platoon comprised of misfits and trouble makers was replaced and a machine gun company was formed in each regiment.

The Model of 1909 field strips down into just a few parts making for easy care and cleaning. In all, there are just 25 parts to the weapon. Note how the forward bipod legs fold back and are held by a clip along the hand guard.

The school ran for nine months until war was declared in April 1917.  The men who went through the school became the backbone of the U.S. Army machine gun corps during World War I.  They were desperately needed because the United States was truly ill-equipped to enter the war.  The total inventory of machine guns in the U.S. when war was declared consisted of 670 Model of 1909s for the Army, 282 Maxim Model of 1904s and 143 Colt Automatic Guns Model of 1985/1914s.  There were also 353 Lewis guns but they were chambered for the British .303 cartridge.

The Automatic Machine Rifle, Model of 1909 “Benét-Mercié,” for better or worse, has its place in early machine gun development and history.  Due to lack of training of the troops it failed to live up to expectations.  Yet, both the French and British versions of the same gun went to war and served admirably and with distinction.

“Utterly useless!” was what that Captain wrote to the Chief of Ordnance.  The Captain was sent to the machine gun school and after an intense two week course on the Colt 1895, Maxim 1904, Automatic Machine Rifle 1909 and Lewis 1916, he was asked if he still wanted to exchange his 1909s for any of the other guns.  He replied, “No one is going to get these guns (the Model of 1909) away from me; they are the best guns in the world, and I am going to sit right down and write to the Chief of Ordnance and tell him so.”  And that is just what he did.

Tags: 2010, Hotchkiss Company, Mle 1909, Robert G. Segel, V2N4, Volume 2
← Machine Gun Memorabilia – Volume 3, Number 1
Enter the REPR: LWRC Enters the Precision .308 Market →
Distributed at trade shows worldwide, Small Arms Defense Journal is a bimonthly publication that focuses on small arms, accessories, gear for the soldier, new products, industry news, and defense trade shows. The first issue of SADJ was Spring 2009, which launched at the LAAD show in Rio de Janeiro, Brazil. SADJ (pronounced “sage”) is targeted toward military, law enforcement, and defense industry professionals. Our job is to reach these groups and tailor content to their interests while producing a publication that is applicable to an international audience.