Browse: Home   /   The Next NATO Rifle and Machine Gun Cartridge? 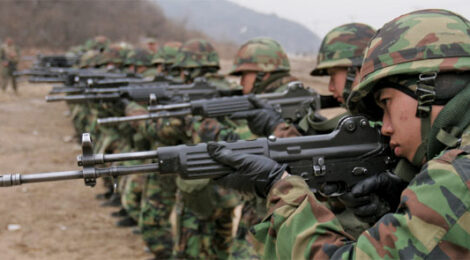 The Next NATO Rifle and Machine Gun Cartridge?

The conflict in Afghanistan, with its emphasis on targeting specific enemy individuals while avoiding collateral damage, features the use of weapons of high precision and limited destructive effect.  As a result, infantry small arms have a much more prominent role than that expected in conventional high-intensity warfare and this is highlighting the performance of their ammunition to a greater extent than ever before.  Now that several NATO nations have started the process of defining their requirements for the next generation of small arms, this is a rare opportunity to ask the question: Is the present combination of 5.56 and 7.62mm rifle and machine gun cartridges optimal, or could we do better?

Lessons from Afghanistan
The British Army has analysed several hundred small-arms engagements in Afghanistan over the past few years.  The results are thought-provoking.  Ever since World War 2, around 300 metres has been regarded as the normal maximum range for small-arms engagements.  However, the Taliban are equipped with PKM light machine guns and SVD rifles chambered in the old but powerful 7.62x54R Russian cartridge, and more than half of their attacks are launched from ranges of over 300 metres, with almost a quarter between 500 and 900 metres.  A report on the performance of small arms in the U.S. Army (Increasing small arms lethality in Afghanistan: Taking back the infantry half-kilometer by Major Thomas P. Ehrhart, United States Army) makes similar points.

British foot patrols were initially equipped only with 5.56mm guns; the L85A2 rifle, L86A2 Light Support Weapon, and L110A1 Minimi Para light machine gun.  However, these weapons have proved inadequate at long range.  A combination of battle experience and the testing of ammunition terminal effectiveness has led to a judgment that the rifle (which has a 20 inch barrel) is effective only up to about 300 metres and the light machine gun only 200 metres because of its short barrel of about 14 inches.  Similar findings are included in the Ehrhart report mentioned above.  What this means is that more than half the small-arms engagements take place beyond the effective range of a full-length 5.56mm infantry rifle, and about 70 percent of the engagements are beyond the effective range of short-barrelled carbines like the M4.

The second problem with 5.56mm ammunition is its lack of suppressive effect.  On most occasions when British foot patrols come under fire, they never see their attackers; the Taliban are skilled at selecting concealed positions for ambush.  So the soldiers return fire in the hope of pinning down the enemy long enough for heavier weapons to be brought to bear.  Field testing has revealed that 5.56 bullets have only half the suppressive radius of 7.62 fire, exacerbated by the fact that the little bullets are more affected by wind drift and therefore less likely to get close to the target.  This is supported by battlefield reports that the Taliban basically ignore 5.56 suppressive fire. 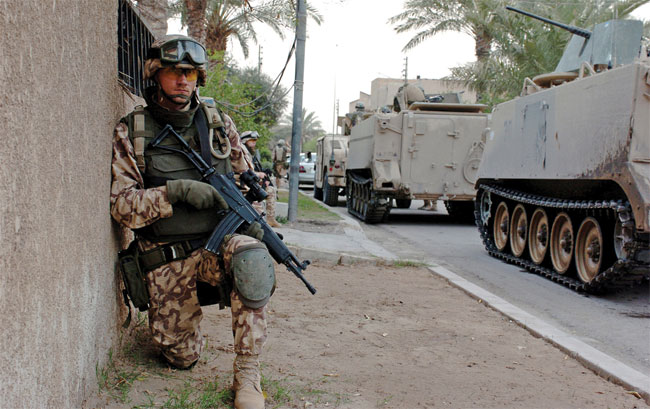 This lack of effective range and suppressive effect are the two major concerns with 5.56mm ammunition reported by the British Army, but there have also been complaints about two other issues which have long been highlighted in the USA: erratic terminal effectiveness, even within its effective range, and poor barrier penetration.  Erratic terminal effectiveness is mainly due to the fact that the M855 bullet frequently does not yaw and upset rapidly on impact, but may instead pass right through a body point-first, inflicting a relatively minor injury unless it happens to strike a vital organ.  There is anecdotal evidence aplenty of erratic effectiveness in combat, and this has been confirmed by laboratory testing.  So have the problems with penetrating intermediate barriers such as walls or car doors and even windscreens.

These shortcomings mean that British foot patrols now carry 7.62mm weapons in place of some of their 5.56mm guns; the very effective L7 GPMG (similar to the U.S. Army’s M240) and L96 sniper rifles.  These weapons are not ideal, as the rifles are bolt action with a low rate of fire and the GPMG is very heavy.  This is most unwelcome given that reducing the burden (typically around 100 lbs) worn and borne by the infantryman is one of the top equipment priorities of the British Army.  The British are following U.S. practice in adopting a semiautomatic 7.62mm sharpshooter rifle (ordered from the American company Law Enforcement International and designated L129A1) and also in seeking lighter 7.62mm machine guns; namely a lightened version of the GPMG and also an even lighter 7.62mm LMG which will match the characteristics of the Russian PKM.

Do We Need a New Cartridge?
Given that we are now adopting a mix of 5.56mm and 7.62mm weapons at section level, what’s the problem?  The 7.62mm guns can deal with the long-range countryside work, with the 5.56 mm retained for urban fighting.  One problem with this is that it may not be possible to draw neat lines around scenarios: a section may be clearing houses in a village at one moment then come under long-range fire as they leave.  It also means that those carrying 7.62mm weapons will be badly equipped for the close-quarter battle, while those with 5.56mm guns will be unable to participate in long-range engagements, thereby reducing the effective firepower of the section in each case.  Finally, it still leaves us with the erratic terminal effectiveness and poor barrier penetration of the 5.56mm M855, along with the 7.62mm’s ammunition weight and recoil.

Various attempts have been and continue to be made to uprate the performance of the 5.56mm cartridge, the most recent being the MK318 Mod 0 which has been adopted by the USMC, and these offer some improvements in terminal effects and barrier penetration.  However, they involve technologies such as open-point and/or fragmenting bullets, which are regarded as unacceptable by the British and probably other NATO countries.  In any case, the degree of improvement is fundamentally limited by the small size and modest power of the cartridge.

The problem with the 7.62×51, at least in its standard M80 ball loading of 147 grains at 2,700 fps, is that it is effective but not efficient.  The bullet does not usually yaw very rapidly on impact; in fact gel tests indicate that some smaller calibres can inflict more severe wounds.  Also, it has an unimpressive long-range performance for its calibre due to the relatively light bullet which sheds velocity quite quickly.  The cartridge is effective simply through its raw power and bullet size, but these have a cost in weight (double that of the 5.56mm) and recoil (three to four times the recoil energy compared with 5.56mm rifles of similar weight).  The heavy recoil makes training more difficult, slows down double-tap shooting and makes automatic rifle fire virtually uncontrollable.  The ballistic characteristics can be improved by using a heavier and better-designed bullet than the M80, but at the cost of even more ammo weight and recoil, which is definitely not what is wanted.