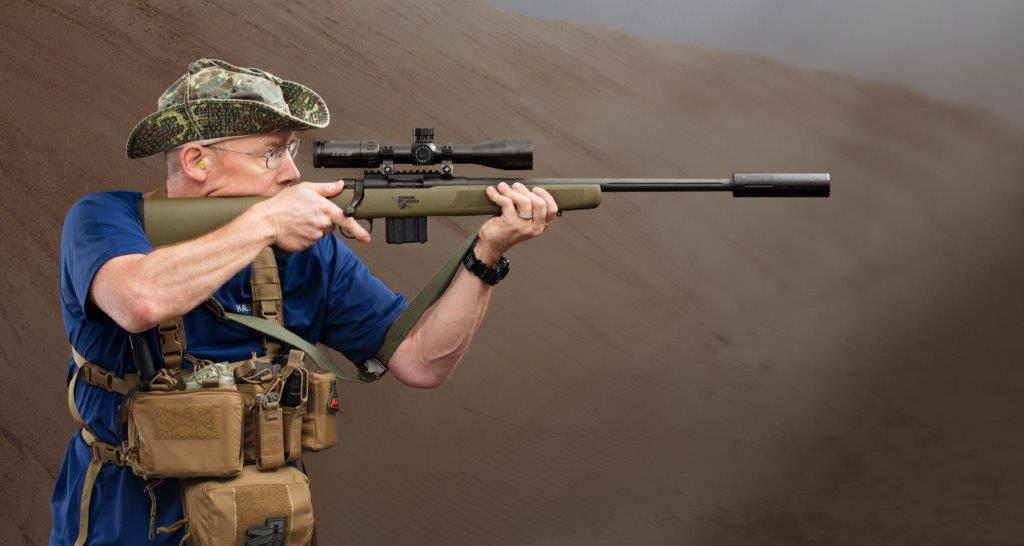 A Bolt-Action Variant for Every Use and Taste

The Mossberg MVP line of rifles was introduced in 2012. As of 2020, this innovative design has become available in .223 Remington, .224 Valkyrie, 6.5mm Creedmoor and .308 Winchester for a total of 17 variants. Available in light configurations for hunting, rugged and railed for defense, and on a chassis for long-range precision, all these rifles have one thing in common: they feed from commonly available and easily loaded detachable double-stack, double-row feed box magazines. The .223 version uses AR-15-compatible magazines, while the 6.5 and .308 versions can use both AR-10 and M1A magazines. M1A magazines even latch with the same motion as AR-10 mags. This approach makes MVP rifles significantly easier to support than brands using proprietary feeding devices. The Mossberg rifles ship with compact 10-rounders, but the availability of larger magazines up to 150-round capacity (in .556) makes clip loading unnecessary. For practical field use, 20-rounders are most handy in all four calibers. AR magazines are helpfully affordable and lightweight. Feeding reliability has been 100% across all three Mossberg MVP rifles I’ve used, and no special effort is required to keep it that way. Running the bolt slower or faster made no difference. The mag release latch and the indentation for it are a bit on the small side for thumbs or gloved fingers but not to the point of being a serious issue. Extended aftermarket release levers are available from Crosshair Precision.

The bolt is a conventional two-lug design with fluting to resist fouling and environmental dirt. The bolt feels loose once unlocked, but that subjective perception doesn’t affect accuracy. Practical accuracy with a moderate power scope and an average shooter like me hover around 1MOA with 168- and 175-grain match ammunition, around 2MOA with 150-grain hunting soft points and a little looser with various ball cartridges. At least with match ammunition, the marksman was the obvious limiting factor. A very nice 2.8-pound trigger helps to make the most of the theoretical precision available. The trigger may be adjusted more heavily up to 7 pounds by turning an internal screw for use with gloves. The safety is also conventional—a right-side push-lever with the forward position being FIRE and back position being SAFE. The bolt can be cycled with the safety applied.

A fluted two-lug bolt it very tolerant of sand and dirt.

The MVP bolt has only moderate lateral support when at the rear-most point of its travel, so it wobbles a bit and makes the cycling less smooth than ideal. That and the generally bulky, rounded forms of the stocks make the rifles look and feel unrefined, but that feeling goes away as soon as range time begins. In actual use, MVP ergonomics proved superior to most other bolt actions. The stock shape combines with the thick recoil pad, making recoil very controllable even in the short Thunder Ranch model. The rifles are easy to shoot well, and I found myself going through a lot more ammunition than expected on every range trip.

MVP actions come pre-bedded on the same block that holds the magazine well. Barrels are free-floated. All models come with threaded muzzles: 1/2×28 in .223 and .224; 5/8×24 in 6.5 and .308. The stocks have separate studs for the front sling swivels and for bipods. This rifle series basically took all the items from my “must-have” list for modern bolt action and checked them.

Box magazines are easier to handle with gloved hands than individual cartridges.

The .223 Thunder Ranch model uses a medium, fluted 20-inch barrel. The model set up, which had a LUCID Optics 4-16x scope and a sound suppressor, proved not only accurate in experienced hands but was an effective teaching tool for a brand new shooter. After stepping up from rimfire, our Australian visitor was able to hit pop cans at 75 yards … that’s no small feat for the first day behind the gun. By mere chance, 77-grain match ammunition and 55-grain ball trajectories match up almost exactly at 100 yards, so they can be used for training and range demonstrations fairly inexpensively. True to its Thunder Ranch heritage, the gun is light enough for off-hand deployment and is accurate enough while supported for precision at long range. Thanks to free-floating, the barrel wasn’t deflected by a tight hasty sling. The 75- to 77-grain match ammunition from SIG SAUER and PRIME shot slightly under an inch, and the 69-grain Federal Premium® Gold Match shot around 1.1 inches consistently.

The .308 Thunder Ranch model mounts a shorter, 16-inch fluted barrel equipped with open sights. Meant for such uses as brush hunting and short-range sniping, this rifle handles well at speed and settled down comfortably on a bipod or sandbags. Recoil, while more pronounced than with the .223, is far from distracting. I have not tested this rifle for accuracy quite as extensively, mainly because the other .308, the 20-inch Long Range (LR) model, got all of my attention. The Thunder Ranch gun is amazing inside of 100 yards and is handy and easy to use even with the open sights. The extra 4 inches of barrel length combined with the AMTAC reflex sound suppressor made the longer variant much easier to shoot, with less blast and recoil. While the rifle looks very compact, the full-length barrel and the all-steel sound suppressor add up to a hefty package; though not as easily hand-holdable with my strength level. For distances beyond 100 yards, the LR rifle is a clear win, being both steadier and possessing an adjustable cheek rest for centering the eye behind large-diameter scopes. Inside of 100, which, incidentally, includes the overwhelming majority of police sniping and defensive uses, the Thunder Ranch variant with a low-power scope would be superior.

An MVP LR with an AMTAC reflex suppressor add up to a very accurate and easy-to-shoot rig.

The 175-grain High Precision Range (HPR), SIG SAUER, PRIME and Federal Premium match ammunition printed around an inch at 100 yards: my variations from string to string revealed no clear superiority of any one load over the others. The 168-grain Magtech® and 175-grain PPU Match, as well as the 165-grain Federal Fusion® printed in the 1.75MOA to 2MOA. Between the hefty barrel and the braking effect of the sound suppressor, the recoil could be described as mild, to the point where even an inexperienced shooter could try the gun without risk of bruising.

While Mossberg MVPs come in a bewildering variety of configurations, only one of them puzzled me: the .308 Scout. Equipped with a long eye relief scope mounted on an extended rail, it still cannot be loaded with stripper clips due to the Picatinny rail being in the way. It’s also entirely unnecessary with the removable box magazine. The Scout’s extended rail, however, would work very well with a thermal or night vision optic mounted in tandem with a daylight scope.

M1A magazines fit well and lock in with straight insertion. The magazine latch relief is a bit shallow for gloved hands.

Depending on the configuration, Mossberg MVP rifles retail from the mid-$500s to about twice that amount. In my experience, their consistent performance as multi-role arms makes them a good value. At range events, they are among the most popular rifles with people who have tried everything on the table.