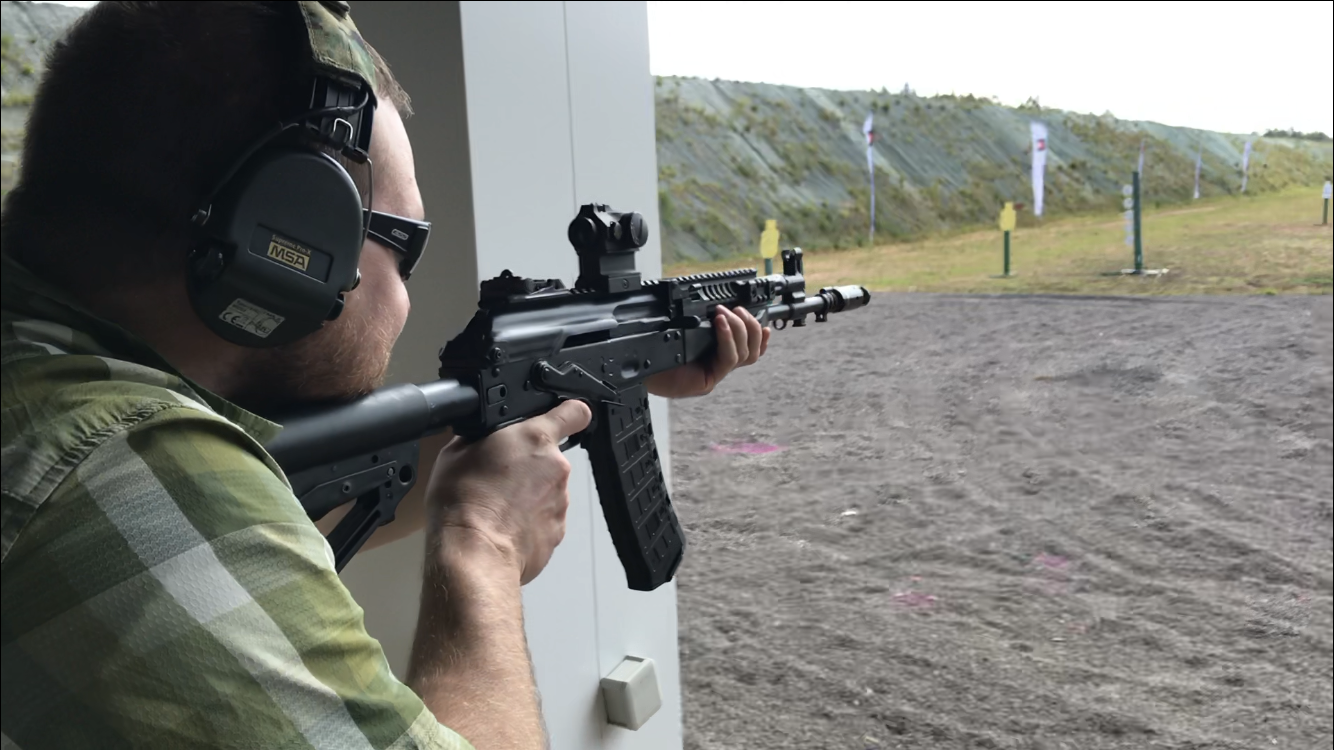 Pathway to the Kalashnikov’s Future Development

Vladimir Zlobin, the former director of the AK-12 project, can be characterized as an ambitious weapons designer. In fact, he is likely the most significant designer of Kalashnikov’s future development in recent history and the designer to bring Russia’s most famous export, alongside vodka and caviar, into the 21st century. I recently had the opportunity to handle the newly adopted variant of the AK-12, and in continuation of my prior work documenting the early prototype development of the AK-47, I could not pass up the chance to dig into its development cycle from Russian primary sources. The AK-12 and its rivals indicate that the Kalashnikov’s evolution is as much alive and in flux as it was in the heady days of 1946–1949. The Russian Army faces new threats and has requirements for technologically contemporary force multipliers. As a result, the Kalashnikov of the next decade will look substantially different from Mikhail’s Kovrov workshop prototypes but nonetheless will keep the same mechanism presented to Stalin in 1949. It was Vladimir Zlobin who took the first concrete actions to manifest a modular next-generation AK rifle and in 2011 took up work at the famed Izhmash Factory in Izhevsk. Today, the institution is part of Kalashnikov Concern. His goal was to design a rifle comparable to the AK-107 recoil balanced rifle, which was being tested at the time for the beginning of the Ratnik trials—the new design being simpler and remaining more traditional than other radical recoil balanced next-generation designs.

In 2012, Zlobin’s team produced the first prototype of the AK-12 to little success. While visually distinct, the rifle suffered from a long list of defects including full-auto reliability issues, requiring the design team to constantly alter and fine tune the design. The new 2013 version addressed the issues of the first iteration, putting the AK-12 back to the drawing board for a third time. The 2015 iteration remained similar to the first iterations; however, it was fitted with a combination front sight gas block in an effort to reduce the weapon’s over all weight. As seen on the two previous designs, the original design was to be ambidextrous with a left to right swappable charging handle with a simple collar on the carrier; removing the dust cover to move the charging handle from left to right, it had a very interesting selector design for improved ergonomics for left- or right-hand shooters and a bolt catch and bolt release. All features were deducted on the next iteration.

By late 2015 to early 2016, Vladimir Zlobin, the original designer who oversaw the project for four years, was replaced for internal reasons by Sergei Urzhumtsev, the former CEO of Molot factory in the Southern Kirov region of Russia. Urzhumtsev was appointed the Deputy General Director and Chief Designer at Kalashnikov Concern. Now in control over construction, Urzhumtsev scrapped the design and its futuristic aesthetic in favor of a new more traditional and simpler design called the AK-400 series at the time. Simplifying the design reduced the cost by allowing manufacturing to use AK-100-generation equipment, change over to a new variant and ease training familiarity and rifle introduction. The gun would also be familiar to those who have handled an AK-74M and would be easily integrated into current rifle training regimes. The new AK-400 was shortly renamed AK-12 and was adopted for military service in 2016, under the designation GRAU 6P70.

An AK-15 with proprietary suppressor.

AK-12 in Its Current Format

The current 2016 iteration of the AK-12 uses a modified AK-74M/100 series construction. It uses an enhanced selector lever and fire control group that fulfill the 4-position requirement for safe, fully automatic, two-round burst and semi-automatic fire. The two-round burst was a requirement by the Russian Ministry of Defense; the original iterations were designed for three-round burst. At the bottom of the receiver a new selector stop is used to accommodate the additional selector position. The rear trunnion is carried over from the 100 series but uses a new recoil guide assembly to secure the new dust cover securely to allow optics mounted on the top M1913 rail to return to zero. A removable rear sight aperture mounts to the rear of the railed dust cover. The AK-12 uses a standard AK receiver from the AK-74M/100 series; however, it does not have a cutout for a forward folding stock locking latch. The front trunnion appears to also be the same as the AK-74M/100 series, but it has a securing block welded in place on top of the front trunnion in place of a rear sight tower as seen on the previous AK series. In its place, a permanently secured block holds the gas tube and mount for the front dust cover rotating pin. This pin secures the dust cover to the front block and allows it to rotate upward. The front trunnion utilizes a “bolt rotate rivet” to lock the bolt into the battery seen on the left of the weapon.

This design feature is a trait of previous military and Saiga products currently in production. The lower handguard secures under the front trunnion with a removable pin intersecting the receiver and two wings of the handguard concealed under the trunnion. The gas tube cover slides on two rails on the lower handguard and is secured in place by the front dust cover lever. The gas tube is non-removable, but a plug in the gas block, secured by a detent, can be removed to access the tube and gas port for cleaning. To the rear of the front sight/gas block is a sling attachment ring, which allows for free movement of a sling to either side of the rifle. The front sight post is elevation-adjustable only with windage done on the rear sight via an RPK-style rear leaf aperture sight. The gas block also has the rear bayonet lug with cleaning rod eyelet; the front bayonet lug is attached to the front muzzle device attachment block. The AK-12 has a new proprietary muzzle attachment block with a reminiscent AK-74 break. The new muzzle attachment method can accept new proprietary suppressors. Unfortunately, the muzzle attachment block is not compatible to any previous muzzle device or suppressor thread pitch. To remove the muzzle device the detent is pushed and rotated 1/4 turn to remove for cleaning or to add a proprietary suppressor.

The AK-12 stock contains a new cleaning kit capsule including a sectional cleaning rod. To access the cleaning kit, a plunger on the bottom of the buttstock is pulled out, and the buttpad slides either up or down for access. The pistol is fitted with a capsule for accessories. Also introduced alongside the AK-12 is a new 5.45mm magazine design with two design iterations. The early version had a visible square recess on both sides of the magazine for a future project that was canceled. The currently manufactured AK-12 magazines have eliminated this feature. The AK-12 will accept all AK-74 pattern magazines and the new 95-round 5.45 RPK-16 magazine.

Izhmash and Kalashnikov Concern took approaches to increase accuracy in both the AK-12 and AK-15. The barrel tolerances were tightened up, rifling was modified, and contact between the barrel and other components was minimized. Despite the efforts to “almost freefloat” the design to increase the weapon’s accuracy, so far no drastic improvements were shown during testing.

The AK-12, in the form officially adopted by the Russian Federation, weighs 7.71 pounds with a barrel length of 16.3 inches. The rifle’s M1913 mounting points for modern war fighting devices amplify the weapon’s effectiveness on the battlefield and are a step forward for the modern Kalashnikov operator. Russian sources expect to see deliveries of both the AK-12 in 5.45×39 (6P70) and the AK-15 in 7.62×39 (6P71) in early 2019.

As part of the requirements of the Ratnik program for a new 5.45×39 rifle, a new 7.62×39 rifle was submitted, originally the AK-103-3 which was dropped for a completely new rifle development.

The AK-15 is intended for Russian special forces needing more firepower than the micro caliber 5.45 and serves also as a good export option for the external AK market to countries still using 7.62×39 cartridge. The hard hitting 7.62×39 remains a relevant and outstanding urban close-quarters caliber and is in use in nearly all global conflicts today. The AK-12, AK-15 and even AK-308 are currently the sole members of the new AK-400 family of rifles and have the same basic components and designs apart from their calibers.

Additionally, the AK-15 accepts all standard AK/AKM pattern magazines and RPK 7.62×39 drums. The AK-15 was released with a magazine resembling the new AK-12 magazine but respectively in 7.62×39. The new AK-200 series of the modification over the 100 series also uses the AK-12/-15 magazines, to their respective calibers. There are also an AK-12K and an AK-15K with short mid-length barrels similar to the AK-104/-105 size.

Kalashnikov Concern’s production history shows a commitment to meet the current and future needs of the Russian warfighter. However, as was seen in the Soviet era, the road from concept to final product is long and winding, often with many surprises. Somehow, it is clear that Kalashnikov and its heritage (i.e., the basic mechanism from 1947 and the idea that simple design has reliable function) are a guiding light along the way.