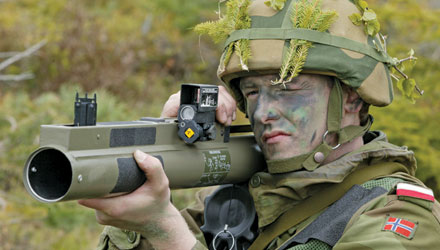 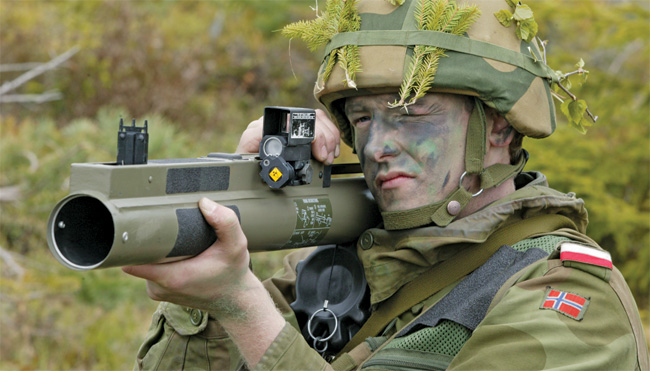 Urban warfare, snipers and insurgents are hiding in buildings and they will try to do devastating attacks on soldiers and the insurgents are protected by the building they are firing from.  When the soldiers are approaching the buildings, it is a good chance that some of them will be killed.  What they need is a weapon that can level the playing field – the shoulder mounted assault weapon.  As western armies are seeking lighter equipment for their dismounted infantry, anti-tank weaponry is also required to shed some weight.  An option to reduce weight and cost is the use of unguided rockets, assisted by advanced ranging, sighting and motion sensors to compensate for aiming errors.  Performing entrances in a building is one of the most dangerous things the soldiers do in urban warfare.  They have to handle the door. Then they have to place explosives on the door, and then give away their position, and if it is a reinforced door, they need more explosives and they can’t stay there.  What if they could handle this from a safe distance?

BDM M141, 83mm, Bunker Defeat Munitions –Previously Known as the SMAW-D
The BDM M141, 83mm, Bunker Defeat Munitions is a small mounted assault weapon.  It can be fired with different rockets against different targets and the weapon can take out bunkers and fortified positions.  The BDM is, in spite of its light weight, absolutely lethal.  With it, the soldier can take out buildings, caves and even tanks.  At squad level, they have the immediate fire power with their M72.  Nothing is safe from this as its new warhead makes the difference.  The soldiers on the ground have an efficient weapon to cause an absolute havoc.  It gives one a capability to take out snipers in security without their own troops having to enter the building.  That gives the bonus of taking out the target permanently without risking their own lives.  The BDM has a state-of-the art munition technology that functions in milli-seconds after entering inside the target when the rocket explodes and making maximum damage at the target. 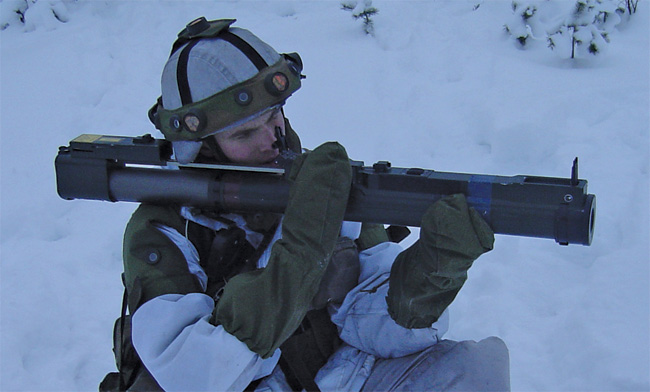 Originally developed and fielded as the M141 Shoulder-Launched Multipurpose Assault Weapon-Disposable (SMAW-D), the U.S. Army has re-designated the SMAW-D as the M141 Bunker Defeat Munition (BDM).  The BDM is the first lightweight shoulder fired weapon system with true multipurpose effectiveness.  It has the same High Explosive Dual Purpose (HEDP) rocket used in the SMAW.  The HEDP rocket is packaged in a rugged, compact telescoping, disposable launcher that has all gunner controls needed to aim and fire the weapon.  Each launcher has an integral night vision device (NVD) mount that accepts any night sight or laser aiming light with a rail-grabber attachment.  The BDM round has a unique fuze that automatically selects the warhead detonation mode to maximize destructive effects for each target type.  No gunner actions are needed – the fuze selects the proper mode when the rocket hits the target.  Detonation of the high explosive charge is delayed against soft targets, allowing the rocket to bury deep inside.  Targets like sand bag bunkers are annihilated.  Rocket impact on a hard target causes immediate warhead function and the resulting squash effect creates enormous holes in solid concrete or triple brick walls, and open man-sized holes in simple concrete block or single brick walls.  Light armoured vehicles suffer huge perforations. 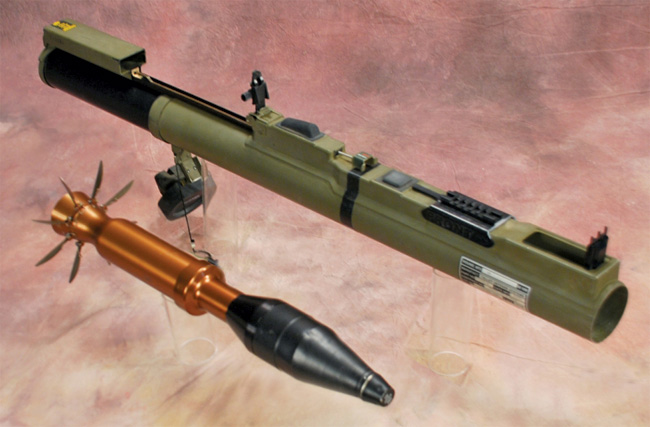 Nammo Talley, Inc. has demonstrated other warheads that offer mission specific options to the proven HEDP destructive capability.  A simple, effective, low cost firing trainer has been developed for BDM using a subcaliber trainer rocket and insert barrel.  Back blast effects are similar to the live round, at lower level to permit repeated firings in each training session.

M72 (European Version)
The M72 Light Anti Tank Weapon (M72 LAW) is widely considered to be one of the world’s leading short-range weapons.  Being compact and light (3.5 kg), possessing small dimensions and easy to operate, it provides excellent performance at a highly competitive price.  It is optimized to carry multiple rounds by every soldier.  It has a versatile firepower with combat demonstrated effects against various targets.  It is simple in operation and gunner skills are quickly developed and maintained with use of a subcaliber rocket trainer.  No gunner training system can match the M72 21mm rocket for effective skill building and low cost.  The simple barrel insert quickly converts any tactical launcher (empty) into a firing marksmanship trainer.  The fully qualified trainer rocket realistically simulates tactical round firing effects, achieving and maintaining superior gunner skills.  It is a durable round of ammunition with proven 20+ year shelf life.  The high velocity rocket increases effective range dependent of versions, M72A4, A5, A6, A7 350 meters.  Minimum range is 20 meters.

Further enhancing the existing versions of this weapon, the newly improved M72 EC LAW (Enhanced Capacity) and M72 ASM RC (Anti Structure Munition-Reduced Caliber) are introduced.  The improvements have been based on extensive feedback on the weapon following recent military operations, as well as incorporating the latest industry safety requirements.  The unique advantages of this product remain in place – specifically, ease of use, light in weight and small dimensions.

M72A9 ASM (Anti-Structure Munition) and M72 ASM-RC
M72A9 ASM is the fire power at squad level.  They don’t need to call for artillery and air power close support.  In a typical urban situation often the only way to take out a hidden sniper, is to use heavy artillery like a rocket, a mortar or air strike.  The chances are that this is not likely to take out the sniper, but also the entire building and in a city that can mean collateral damage.

A direct result of Soldiers Lessons Learned, the M72A9 ASM was fielded to give devastating firepower to every squad member and keep size and weight to a minimum.  The time delay fuze allows the round to penetrate the target, placing the high output blast fragmentation warhead inside to maximize effectiveness.  Proven to penetrate brick, adobe, concrete block, and most common MOUT walls, doors and windows, the M72A9 ASM provides every Soldier the ability to defeat threat personnel from stand-off distances and protected positions.

M72 ASM FFE (Anti-Structure Munition – Fire From Enclosure)
To meet the need of Warfighters around the world, a new M72 production unit is in development and will soon truly satisfy the Fire From Enclosure goal.  Firing noise will be dramatically suppressed; smoke and flash are completely eliminated – with no loss in muzzle velocity. 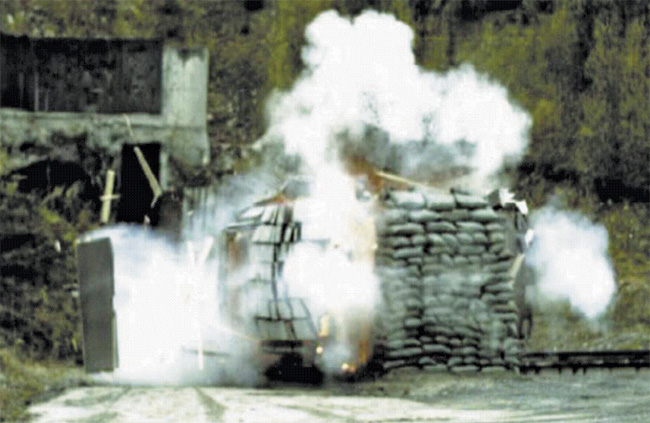 This system has gone through numerous improvements over the years based on worldwide combat experience as well as new requirements from the users. The new RAM offers scalable effect in the target ranging from low collateral damage to maximum penetration. The new warhead features an enhanced blast explosive to ensure maximum effect in structures. This represents the preferred choice for urban war fighting. (Nammo)

M72 EC MK2 ENHANCED CAPACITY
This version is constructed on basis of numerous improvements over the years based on worldwide combat experience as well as new requirements from the users.

REFLEX SIGHT FOR M72 LAW
Improved Operability Day and Night Illumination principle – Daylight will illuminate the optical reticle. In darkness the reticle will be illuminated by external light sources.  The sight has a ballistic reticle with AV moving target aim points.