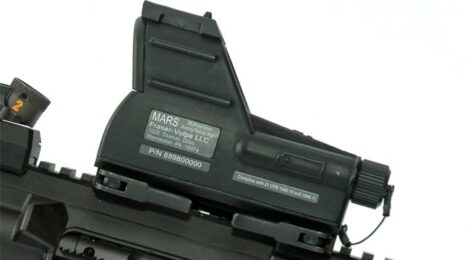 A relatively new product on the U.S. market, the Multi-Purpose Aiming Reflex Sight (MARS) has been on the international market for several years, and is reportedly used as a standard sight on the Israeli IDF Tavor assault rifle.  In addition, over 7,000 were procured by the U.S. Army for use in the Global War on Terror.  In the post-modern AR-15 world, what differentiates the MARS within the crowded reflex sight market?  Apparently, a lot.

At its base function, the MARS is a reflex weapon sight that utilizes a solid prism instead of a holograph.  By using the solid prism, optical distortion is eliminated from the sight.  As a sight, the MARS projects a circular 0.3 mrad reticle parallel to the host weapon’s line of fire that can be adjusted automatically over a wide dynamic range.  In addition, the MARS also provides the user with a red laser system.  Both the optical sight and the laser are daylight compatible and can be observed with both eyes open while the weapon is being fired.

The reflex sight is like most other reflex sights on the market – it imposes a red 2 MOA dot on a screen and directs the shooter where to aim the rifle.  Unlike other reflex sights on the market, the size of the MARS sight is relatively small – a diminutive 25mm, compared to 30mm diameter viewing screen on other sights.  Does the smaller size pose an issue?  In actual use, perhaps not; the smaller size certainly allows the MARS screen to be more rugged and less prone to breakage than competitors’ screens that are much larger in size.

The combination of a reflex sight with an aiming laser allows soldiers and recreational shooters the opportunity to open valuable real estate on the host weapon’s M1913 Picatinny rails.  By replacing the AN/PEQ-4C laser module, soldiers are no longer forced to carry multiple sized batteries into the field, are relieved from the additional weight of two systems, and can easily replace the batteries without removing the sight from the host weapon.  The aiming dot of the reflex sight is undetectable with night-vision devices from the front of the weapon.

Israeli designed, but made in the United States by Fraser-Volpe, the MARS utilizes a single AA-sized battery.  Like all compromises, the single battery concept has advantages and disadvantages; AA-sized batteries can be found anywhere in the world.  On the other hand, the single battery is being used to power the reflex sight and laser system.  To extend battery life, the system will go into ‘sleep’ mode if the weapon is not physically moved for a period of five to ten minutes.  Movement of the weapon (and by default, the MARS sight) will prevent the system from automatically shutting off.  Claimed battery life was 200 hours of continuous use with the reflex sight alone.

Two versions of the MARS are available – one version features a visible red laser, while the other version features an IR laser.  In concept, both versions should work the same, however reportedly the IR laser will co-witness with the red dot sight, due on part to the laser being invisible to the naked eye.  An IR version of the MARS sight was not available, and this feature could not be verified. 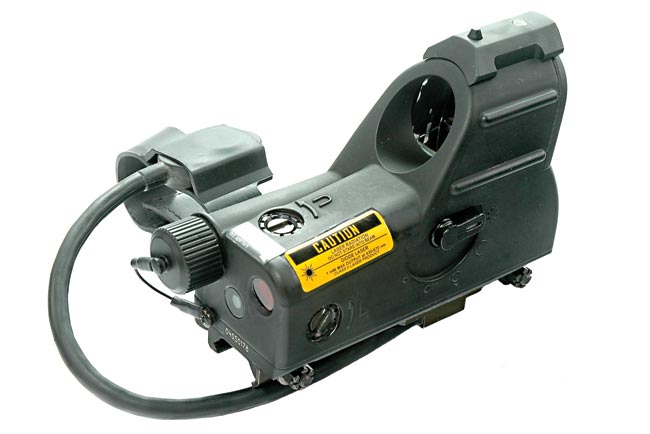 Finally, because the sight was developed and intended for the Tavor rifle, the sight appears to sit unusually high on an M16 host weapon.  Based in part to the height of the MARS sight, a co-witness back-up iron sight cannot be used with the unit.  The unit as tested did not have any secondary sight options and there were no built in back up sights within the MARS housing.

Overall, the unit is rugged and well built.  It is simple to use, and features many good attributes.  Battery consumption may be an issue, but given the ubiquitous nature of AA-sized batteries around the world, battery availability should not be an issue.

Additional information on the MARS sight may be found online at the Fraser-Volpe website: www.fraser-volpe.com/Products/mars.pdf.