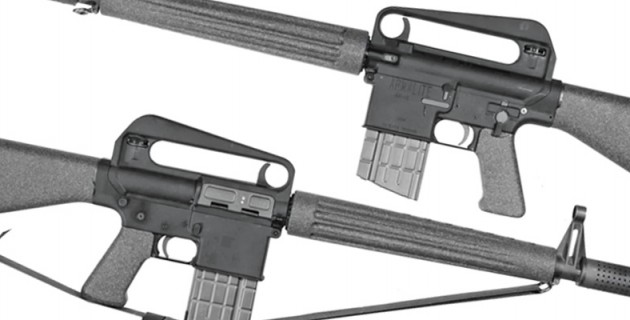 The Armalite AR-10: From The Beginning

ABOVE: The right and left side of serial number 1004 as it was submitted to Springfield Armory.

The AR-15/M16/M4 series rifle is undoubtedly the most popular rifle in the United State for all military, law enforcement and commercial markets.  It is the most versatile platform of a rifle on the face of the planet.  Another rifle has crept up into that popularity; one that was on the scrap heap of the U.S. Army for nearly 40 years.  That would be the one that started it all, the AR-10.  “Tomorrow’s Rifle Today” in the late 1950s has turned out to be today’s rifle today.  The rifle that Ordnance Corp would dismiss in the late 1950s would have its day in the late 1990s and in the new millennium would serve as the primary sniper rifle for the U.S. Special Operations Command as well as the U.S. Army, replacing M24 bolt action rifles.  But where did all this begin?

In 1953, George Sullivan gained interest from Richard Boutelle of Fairchild Engine and Aircraft for his idea of developing a small arms design firm.  Boutelle, a gun enthusiast himself, invested capital to start up this new company on 1 October 1954.  The money came from the research and development budget of Fairchild.  This company would have an impact on the history and direction of the modern battle rifle in the U.S. beyond Sullivan’s and Boutelle’s expectations.  ArmaLite Corporation was born.  The Fairchild winged Pegasus would have a circle and cross hairs superimposed as the symbol of the new corporation.  ArmaLite was envisioned to be a “think tank,” not a small arms manufacturer.  The new designs were to be made but manufactured by a dedicated manufacturing facility.

Much success in life is timing, being in the right place at the right time.  Even more so, having an individual that knows how to spot talent and grab it.  While working on a prototype rifle, George Sullivan was test firing his design at the Topanga Canyon Shooting Range outside of Los Angeles where he saw and met a young man who was doing the exact same thing.  That young man was Eugene Morrison Stoner. Shown is a Portuguese soldier with is A.I. AR-10. The Portuguese Army was well satisfied with the performance of the AR-10 and would have procured more if A.I. would not have cut off production.

Stoner was born in Gasport, Indiana on November 11, 1922.  His family would later move to California.  In 1939, Stoner worked for Vega Aircraft and with the U.S. entering World War II Stoner would serve in the Marine Corps as an Ordnance Specialist.  At the time of his chance meeting with Sullivan, Stoner was making dental plates and in his spare time he would design advanced rifles.  Sullivan was very impressed with the rifle Stoner was testing, later known as the M5 (it evolved into the AR-3), and hired him as the Chief Design Engineer at ArmaLite.  The AR-3 was granted U.S. Patent Number 2,951,424.

Stoner was a genius; well ahead of his time particularly in the firearms industry at that time.  In fact, radical would be the proper word.  In a world of tradition that required steel and wood, young Stoner would take his experience in the state-of-the-art aircraft industry and apply that technology to firearms development.  Using aircraft grade aluminum and synthetic materials in place of the traditional wood and steel, Stoner would create the lightest battle rifle in the world.  But was the world, particularly the U.S. Ordnance Corps, ready for it?

Stoner’s new concept, the AR-10 would deviate from tradition.  First, the AR-10 would be completely inline in construction.  Meaning the barrel, bolt, bolt carrier and recoil spring and buffer were directly in line with the shooters shoulder.  This reduces traditional muzzle rise and felt recoil compared to the traditional M1/M14 rifles.  This also makes the rifle firing in fully automatic that much more controllable.  Due to no drop in the stock, the sights had to be raised so the shooter could see through them; hence the carrying handle (third prototype) was born which would become an icon for Stoner designed weapons.

The first prototype rifle had the needed raised front and rear sight and was chambered for the 7.62x63mm (30-06 Springfield) cartridge.  The cartridges were fed from a standard BAR magazine.  The stock was a tubular stock with a butt plate added to the rear.  This rifle used the same direct gas system used in Stoners AR-3 rifle which we will discuss in more detail. The second prototype added a telescope sight, which was raised up to allow the shooter’s eye to align.  Stoner added a more conventional stock to the rifle.  The pistol grip was made from the same material as the stock and hand guards.  There were no iron sights on this model.  This model also differed in that it was chambered for the 7.62x51mm cartridge that was soon to be adopted as the standard cartridge for the U.S. military.

The third prototype was far more close to the finalized AR-10.  Many new features were added and also the gas system was altered.  The first thing you notice is the carrying handle on the upper receiver containing the rear sight as well as the raised front sight that is attached to a muzzle compensator.  The bolt was designed after the Mel Johnson designed multi lug bolt.  There are seven lugs as well as the extractor.

This rifle used a unique new gas system.  Although previously used on the Swedish AG42B and the French MAS44 and MAS49/56, the new part of the system was to be a gas cut off once enough gas was used to operate the action.  This reduced recoil as well as increased the service life of the moving parts of the rifle.

When the rifle would fire, the bullet travelled down the barrel until it passed the gas port.  Gas was tapped from the barrel into the gas port and pressurized a long gas tube on the left side of the barrel.  The gas tube entered the side of the bolt carrier group.  There a piston chamber was created between the back of an internal chamber in the bolt carrier and bolt.  The gas created an internal pressure, pushing the bolt carrier to the rear.  The cam pin is rotated by the cam path in the receiver unlocking the bolt as it moves rearward.  This also acted as the cut off for the gas once the bolt begins its rearward travel venting off the unused gas.  As the bolt carrier moves rearward the fired cartridge case is extracted and ejected from the rifle once the mouth of the case clears the ejection port.  Now the spring loaded buffer returns the bolt carrier group forward with the bottom two lugs stripping off the top cartridge from the magazine, feeding and chambering the round.  Then final movement locks the bolt into the barrel extension.

Perhaps the most disastrous moment in the history of the AR-10 and if any moment defined the failure in the U.S. trial was the catastrophic barrel failure of serial number 1002. This was caused by Sullivan’s decision to use his aluminum barrels with a SS rifle sleeve. Stoner was adamantly opposed to this course of action and he was right.

This gas system eliminated several heavy parts of the traditional piston mechanism including a heavy operating rod.  Recoil was drastically eliminated due to not having the mass of an operating rod and piston slamming into the shooters shoulder.  This decrease in weight of the carrier group increased accuracy as well.  To further lessen recoil in this inline construction rifle, a muzzle compensator was added.  This made recoil with the larger 7.62x51mm caliber round smooth and easy.

The 4th prototype took on more of what we see today in the design of the AR-10/AR-15.  The rifle has two receivers, an upper and lower held on by a front pivot pin and a rear takedown pin.  The receivers were manufactured from state-of-the-art 7075 T6 aircraft aluminum forgings.  The stock and pistol grip were manufactured from foam-filled phenolic resin, which was lightweight, very strong and impervious to the elements, unlike traditional wood.  The rifle was fed from an aluminum 20-round magazine.  For strength, reinforcing ridges were pressed into the sides of the magazine giving it the “waffle” appearance.  These magazines were intended on being disposable in combat.  Due to the light weight of the magazine, soldiers would be able to carry more ammunition in preloaded magazines compared to previous rifles. Close up view of the muzzle compensator found on the early Hollywood rifles. The end is held on by a snap ring that could be removed with the tip of a bayonet.

The rifle appeared futuristic and broke with traditions of what a military rifle was supposed to look and feel like.  Too new for some and those were often the influential people making the decisions on procurement.  Many new designs were tried to make use of new materials such as the use of aluminum barrels.  That came to no avail but shows the type of research and development going on at ArmaLite.

In late 1955, the U.S. Army got their first look at the new AR-10.  It was demonstrated to high ranking officials at the Infantry School at Fort Benning and Headquarters, Continental Army Command at Fort Monroe.  It was ArmaLite’s hope to delay the selection of the new rifle to replace the M1.  The T44 (M14) and the T48 (FAL) had been tested for quite some time and the decision was close.  Using the 4th prototype as the base, 50 rifles were handmade.  The barrels were a controversial issue within the walls of the ArmaLite shop.  Stoner had highly recommended and fought to have standard military grade steel barrels used.  Sullivan however over-ruled his recommendations and they used aluminum barrels swaged around 416 SS rifled liners.