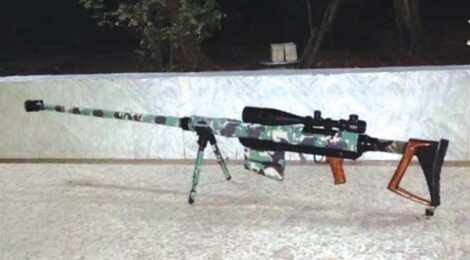 ABOVE: A home-made anti-materiel rifle (AMR) made by Syrian rebels. (YouTube video)

The Syrian conflict continues to yield interesting expedient small-arm designs. ARES has received YouTube video links that document Syrian rebel forces manufacturing anti-materiel rifles (AMRs), of which there appear to be two variants. They are both home-made bolt-action anti-materiel rifles similar to, and possibly inspired by, home-made and custom hobbyist-type rifles found in other parts of the world, most notably the U.S. The examples shown are chambered for the Russian 12.7 x 108 mm machine gun round, and are referred to in the videos as the Nimr 2. They were manufactured in the workshops of Katibat Abu Asad al-Nimr, a group associated with the Hazzm Movement.

The tubular receiver is constructed out of steel, and is shown being machined in a mill or drill machine, with extensive hand-finishing whilst held in a bench vice. A length of M1913 rail is attached to its upper surface. A simple rectangular trigger-mechanism housing (with rotating trigger-bar safety) and magazine well appears to be welded onto the underside of the receiver. The magazine is also fabricated from sheet steel, and is seen in one of the videos being matched up to the magazine well to establish the proper seating depth and angle of presentation of the round. The bolt (whose locking arrangement is unclear) and long, tubular firing pin are also milled components, finished using an angle-grinder, and even the single chambered muzzle-brake is built from scratch using welded sheet steel. One variant features a custom wrap-around wooden stock and a fixed tubular bipod, whilst the other has an off-the-shelf plastic AK-type pistol grip and home-made skeletal buttstock and folding bipod.

An unusual feature on the pistol-gripped example is the camouflage sleeve cover shown being slipped over the barrel and receiver. This cover incorporates a flap dust-cover for the bolt handle slot to protect the otherwise-open action. The barrel used on both variants is the only significant factory-produced component, and was originally made for the Chinese W-85 heavy machine gun, available commercially from Norinco and previously documented in Syria. The lack of a factory-produced muzzle-brake may imply that these barrels were not cannibalised from complete weapons, but rather sourced as spare parts. The telescopic sight is also likely to be Chinese, resembling some cheaply-made models in the 20x magnification range available online. The test fire of the barrelled action in the first video shows a large muzzle-flash, but nothing from the unused machine gun gas port, which suggests that it has been sealed off. The complete weapon is later test-fired several times with apparent success, although its accuracy cannot be assessed. An anti-materiel rifle (AMR) being worked in a bench vise. (YouTube video) Tags: 2016, Anti-materiel rifle (AMR), Jonathan Ferguson, V7N5, Volume 7
← The Mk12 SPR (Special Purpose Rifle)
U.S. Carbine Caliber .30, M1, M2, and M3 →
Distributed at trade shows worldwide, Small Arms Defense Journal is a bimonthly publication that focuses on small arms, accessories, gear for the soldier, new products, industry news, and defense trade shows. The first issue of SADJ was Spring 2009, which launched at the LAAD show in Rio de Janeiro, Brazil. SADJ (pronounced “sage”) is targeted toward military, law enforcement, and defense industry professionals. Our job is to reach these groups and tailor content to their interests while producing a publication that is applicable to an international audience.