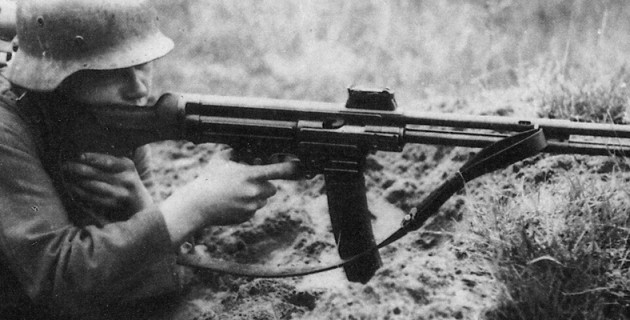 The bolt mechanism was already developed as early as October 1939, judging from the blueprint dates, and the first firing prototype was ready in early 1940.  The HWA was not particularly happy with the costly and labour-expensive machined design, so the blueprints were ordered submitted by the HWA to the Merz Werke, who made such a wonderful job converting the machined MP 38 receiver into a pressed sheet metal one for the MP40.  Merz Bros. of Frankfurt (manufacturer’s code ‘cos’) were Germany’s premiere office and shop equipment manufacturers, not unlike the American National Cash Register Co., with enviable experience in sheet-metal pressing technology.  They did not disappoint the HWA this time, either, submitting a new pressed receiver for Schmeisser’s rifle during 1941.  The only machined part of the receiver was the barrel block.  At the same time the Württembergische Metallwarenfabrik (WMF) of Geislingen (code ‘awt’) developed a similar, all stamped lower receiver with pistol grip for the MP42S (such name was used in all concerned correspondence until December 1941).  Not a single specimen of MP42S is known to survive today, only a magazine with ‘MP42(HS)’ legend was preserved.  As of February 1942, the name was officially changed to MKb42 – but surviving prototypes display a ‘compromise’ wording of M.K.42(HS).

Despite all the problems and several changes in Polte’s cartridge shape and dimensions, the C.G. Haenel kept the deadline set in the April 1938 contract, and 50 prototypes were indeed delivered to the Infantry School in Döberitz by early July, 1942, where they were undergoing preliminary field trials as of July 3, followed by main qualification testing started on July 9 in Kummersdorf.

After the Kummersdorf trials, HWA sent a modification guideline for what was now officially called the ‘MKb42(H)’ – underlining the existence of another (Walther) prototype.  Amongst the required changes were addition of the Zf41 scope rails on the sight base, bayonet lug, extended muzzle thread to attach grenade launcher and stacking hook, as well as a spring loaded ejection opening cover, to keep the dust off.

To compensate the costs, a limited batch of modified rifles for troop trials was also ordered.  This limited production was scheduled to start in early November, 1942 and wind up to achieve 10,000 monthly by March 1943.  Problems with cooperating manufacturers delayed the production, and it never achieved the planned 10,000 rifles a month.  A total number of MKb42(H)s ever manufactured between November 1942 and September 1943 was a mere 12,000, roughly a 1,000 per month.

The ‘Frankenstein’ Hybrid
The solution was to revert to the ‘Frankenstein’ policy of state buying-out different designs from the companies and then picking their best solutions to bundle them together, forming the ideal weapon.  HWA had excellent experiences with that kind of tinkering – this was the way the MG 34 and then MP 38 were created, and both counted amongst the best automatic weapons of WW2.  That same November 1942, when serial manufacturing of the MKb42(H) begun, C.G. Haenel was already busy drawing the HWA-ordered ‘Frankenstein’ hybrid rifle, combining the best points of MKb42 (H) and MKB42 (W).  The former became a ‘donor’ of the Merz Bros sheet metal upper receiver with hinged WFM Geislingen lower receiver, the long-stroke gas piston and tilt-locking bolt, while Walther’s input was the internal hammer trigger mechanism and closed-bolt firing scheme.

This Haenel-Walther hybrid was initially called the ‘MKb42(H) aufschießend’ (or closed-bolt MKb42(H)), then re-labeled MP43B.  During the first two quarters of 1943 it underwent considerable modification, leading to the creation of the MP43/1. Most of the changes concentrated on the lower receiver, where MKb42(W) fire control group with trigger, hammer and fire selector was crammed into MKb42(H)-style hinged casing.  The fire selector itself was of Haenel design – a cross-bolt with E (for Einzelfeuer, single shot) on one end and D (for Dauerfeuer, fully automatic) on the other.  The experts decided it was easier to master than Walther’s lever, moreover, it was all too frequently mistaken for the separate safety lever, placed nearby.  With two levers like that, it was feared that in an emergency a soldier might put his rifle on safety while trying to put it into fully automatic fire mode in a CQB scenario.  (Similar consideration led American designers to substitute a lever safety for a cross-bolt on the M1 Carbine lower – to avoid mistakes with a similarly-placed magazine release button).  The safety lever was a new feature, MKb42(H) didn’t have a need for one – a safety cut-out in the receiver was enough to lock the bolt to the rear, and in battery when no round was chambered, the weapon was completely safe.  As opposed to classic SMGs, the bump-fire (accidental discharge from bumping the stock on the ground) was impossible due to the bolt being locked.  Reversing the firing scheme made the rear safety cut-out redundant – the bolt was no longer held back by the sear, the return spring was closing and locking it with round chambered, while a safety lever blocked the hammer.

The long gas plug was replaced by a short one with stacking rod sticking over the barrel.  The front sight carrier was now much simpler to manufacture.  The rifle was no longer looking like an O/U double shotgun with banana magazine and pistol grip.

The bolt carrier also changed.  Where the firing projection of the bolt carrier used to be in the MKb42 (H), a slot was needed to allow the swinging hammer to reach the firing pin.  But as the slot would weaken the bolt carrier, a firing pin extension was added, allowing the hammer to blow the hammer pin without cutting the bolt carrier proper.  But now the return spring, which rested in the precisely same place, had to be moved back as well.  A 50-mm (ca. 2-in.) long hollow tail was thus added, with a central void channeling the hammer, and a rear projection for the return spring to push at.  The upper part of the carrier was no longer sleeved – as the cocking handle ceased to turn in order to be inserted into the safety cut-out.

The Fuehrer and Sturmgewehr
The ever-changing name of the Sturmgewehr, (first a submachine gun, then machine carbine, again a submachine gun and finally the assault rifle) were mirroring the constant changes in tactical categorization of the weapon.  Hitler’s domination in the weapons development field often meant that his conservative views negatively influenced the small-arms development in the Third Reich.  Many authors researching the Sturmgewehr’s twisted path to glory repeat the mantra of ‘Hitler was against an intermediate round rifle’ and explain the frequent name changes as efforts to camouflage its development from the Fuhrer.

With recently found documents this thesis simply doesn’t hold water.  Numerous reports and company correspondence describe frequent presentation of the subsequent stages of the assault rifle development to the Fuehrer, as well as his live interest in the process and frequent input of remarks and advice, not all of which can be brushed aside as maniacal raving.  Would the Fuehrer really opposed it, he had means on hand to stop it immediately, once and for all.  And there were many other development programs that have suffered such an ignominious end.  If there was any ‘conspiracy’ of designers and generals to hide the assault rifle from Hitler, his anger would certainly hit them hard.  And in the end, it was Hitler himself, who invented the name Sturmgewehr, which immortalized the program that he was supposed to hate so much.

As far as can be deducted from surviving documents made public so far, the truth about Hitler’s attitude towards the Sturmgewehr seems to be that the Fuehrer was only reluctant to commit the revolutionary weapon to the front piece-meal – in other words he learnt the lesson from a mistake he made with Tiger and Panther tanks.  He knew that the industry would never be able to replace a dozen million Mauser bolt-action rifles with assault rifles overnight, and wanted to avoid over-burdening the already hard pressed Army’s logistics structure with supporting two rifle cartridges of the same caliber, but different type.  The new rifles were designed to encompass the new technologies, which made the Sturmgewehr less time-, skill- and material-consuming than the Mauser, but on the other hand they needed much more complicated machinery than the ones needed to turn out the K98.  Without a wide network of sub-suppliers, without timely supply of components, the potential of companies capable of manufacturing the MP43 was not sufficient to deliver enough of them to replace all Mausers quickly enough to make an impression on the front.  Introducing a revolutionary new design piece-meal was indeed pointless and could have easily proved counter-productive.  Hitler wanted to introduce the new rifle at a largest possible scale and without making too many waves – which was portrayed after the war as an obscurant resistance to novel technology, and added to the ‘nation’s alibi’ for the lost war.

Tags: 2013, Leszek Erenfeicht, Sturmgewehr, Sturmgewehr 44, V5N3, Volume 5
← The SIG 716
Protector: Norwegian Remote-Controlled Weapon Systems →
Distributed at trade shows worldwide, Small Arms Defense Journal is a bimonthly publication that focuses on small arms, accessories, gear for the soldier, new products, industry news, and defense trade shows. The first issue of SADJ was Spring 2009, which launched at the LAAD show in Rio de Janeiro, Brazil. SADJ (pronounced “sage”) is targeted toward military, law enforcement, and defense industry professionals. Our job is to reach these groups and tailor content to their interests while producing a publication that is applicable to an international audience.