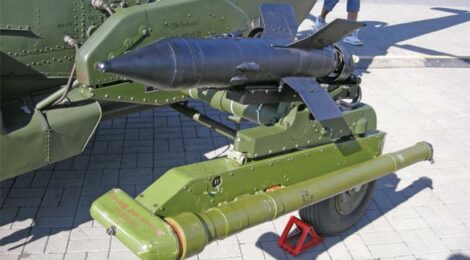 From the Mean Streets: Maljutka

The strategic placement of elements on the battlefield has been the subject of millions of words, from many sources, both experienced and those who are perhaps filled with a bit of wishful thinking.  As the tactics are discussed, one gets a feeling who has been on the sharp end of the spear, and who has not.  Unrealistic and overly complex battle plans tend to unravel quickly in the heat of the battle.  We also tend to keep fighting the last war we were in, instead of the one we are walking into.

So it was after World War II that the Soviet Union and the Warsaw Pact countries, and the Americans and the NATO countries, all planned for full scale, army to army, massive maneuvers with brigades of tanks crossing huge plains, and the Cold War was on.  The world looked on and made their own plans.

Enter Vietnam.  The United States and Allies found themselves mired in guerilla warfare that lasted well over a decade with few battles that mirrored the fighting in WWII: Hamburger Hill and the Battle of Hué being two that come to mind.  In 1975 as the North Vietnamese swept to the south, the massive battles looked more familiar to Cold War tacticians.  A decade later the Soviet Union was trapped in a similar situation in Afghanistan, fighting guerilla forces that demoralized their troops and simply wouldn’t cooperate with the massed Russian battle plans.  The Mujahedeen preferred the hit and run, the lightning fast take and break.  Both the Americans and the Russian forces had adjusted to these tactics, and learned to fight in smaller units, more effectively.  However, the WWII lessons were still evident in the doctrine of the main services. 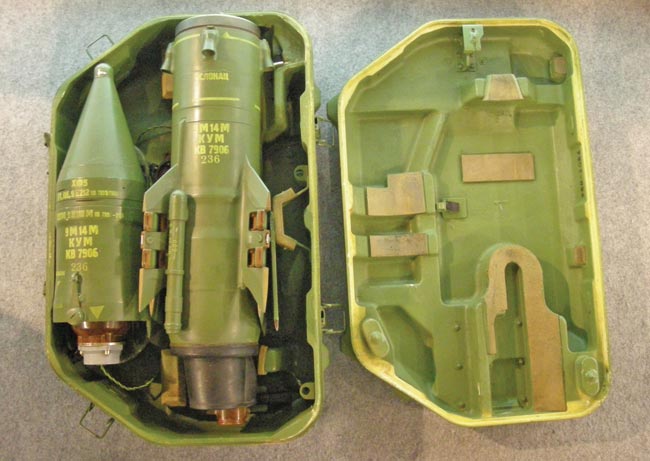 Maljutka clamshell case opened. This is the proper packaging for carry. Underneath the warhead is the control cable.

The Soviets had three basic mobile, infantry carried anti-tank weapons on the planned battlefield, and all had different ranges, so they were used as interlocking zones of engagement.  The first, up-close and personal anti-tank weapon was the RPG-7 40mm recoilless rifle with its rocket-assisted grenade.  These shaped charge weapons could provide reasonably accurate fire up to 550 meters with a skilled operator and the optical sight.  RPG-7 operators trained for two years to have their job.  They were to be the first line, and to fall back and re-engage as the enemy tanks moved forward.  Sitting further back, with a realistic range of about 1,200 meters but a possible range of 1,600 meters, were the SPG-9 73mm recoilless rifles with their rocket assisted grenade.  While the close-in RPG-7 operators were taking out the tanks from their personal space, the SPG-9 operators could sit back with their tripod mounted weapons over a kilometer away and engage the tanks with their shaped charges.  The battlefield was envisioned as overlapping zones, and the farthest back was the 9M14 Malyutka (Russian spelling) guided missile, which has a 3,000 meter range.  There were, of course, other weapons on the battlefield that were planned into the tank destroying mission, but these three were the light-weight components.

Which brings us to the Maljutka (Serbian spelling), the subject of this article.  During the Bosnian war, several of the combatants used these 1960s era Manual Command to Line of Sight (MCLOS) missiles.  There is a filament line that unspools as the missile travels and carries commands from the operator’s joystick motions to the missile.  These were a standard of the unified, pre-breakup Yugoslav military.  The current product is called Semi-Automatic Command Line of Sight (SACLOS).

Essentially, the Maljutka team is comprised of three members: the operator and two assistant gunners.  As the team deploys there will be a total of eight missiles with them in their clamshell carrying cases, which double as the launching platform.  The operator carries the 9S415M controller on his back and one missile case in each hand.  Each assistant gunner carries one on his back, and one in each hand.  (See the attached photos for a summary of how these are deployed and prepared for action). 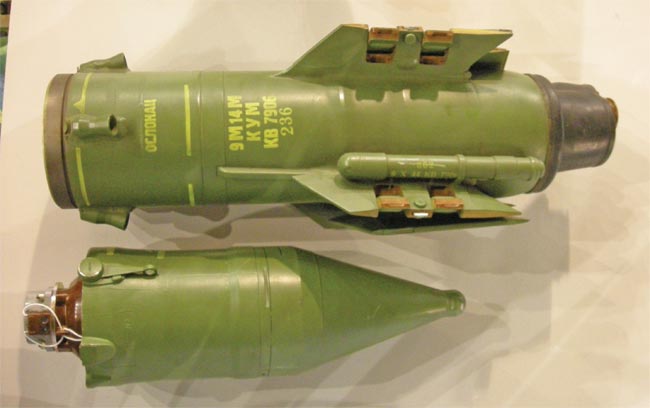 The two parts of the Maljutka rocket: the rocket body and the warhead.

The original warhead was a simple shaped charge, but in recent years there have been the following:

HEAT:  High Explosive Anti-Tank, which is an upgraded warhead that has a probe to the front for fuze stand-off.  The improved HEAT can penetrate up to 520mm (20.47 inches) of RHA, about 25% more penetration than the original HEAT.

Tandem:  This is a High Explosive Anti-Tank warhead that has a tandem charge out to the front to deal with reactive explosive armor.  The front charge clears the surface of the tank of its reactive armor and the main shaped charge is improved to penetrate up to 800mm (31.5 inches) of RHA.  The Tandem warhead will not fit in the standard carrying case.

Thermobaric:  This is perhaps the most interesting for today’s non-traditional battlefield where the enemy may be hidden in caves.  The ability of a small unit to sit back 2.5 kilometers and wire guide a Thermobaric round into a cave is enlightening to say the least.  Effective blast from the new Thermobaric rounds is equivalent to 5.9-6.1 kilograms (13-13.5 lbs) of TNT.

In closing, it is recommended by the author that Coalition forces may wish to consider the Maljutka for mountainous terrain, especially with the Thermobaric warhead.  While pitched battles between armies of tanks may not appear to be our next threat, this old warhorse of the Cold War certainly has a few tricks left, especially after the face-lift that Krusik has given it.

Tags: 2010, Dan Shea, V2N1, Volume 2
← International Legal Affairs: Volume 2, Number 1
Modern Day Marine 2009 →
Distributed at trade shows worldwide, Small Arms Defense Journal is a bimonthly publication that focuses on small arms, accessories, gear for the soldier, new products, industry news, and defense trade shows. The first issue of SADJ was Spring 2009, which launched at the LAAD show in Rio de Janeiro, Brazil. SADJ (pronounced “sage”) is targeted toward military, law enforcement, and defense industry professionals. Our job is to reach these groups and tailor content to their interests while producing a publication that is applicable to an international audience.