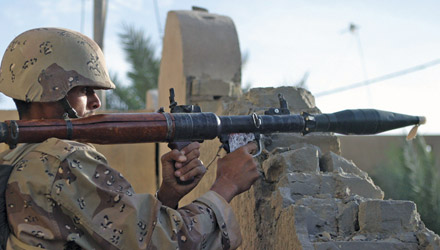 Iran in this case has followed the Russian family, adding in their indigenous round ‘drill handle’ style rear grip, and the trademark G3 pistol grip. This example is from the Iran-Iraq war in the 1980s. (Photo by Dan Shea, in the Middle East)

Russian family - Iran refined this design, strengthened their welding, utilized superior production methods, and kept their unique G3 pistol grip and cylindrical rear grip. There is a much shorter model of this allowing for backpack concealment. These were used heavily in Bosnia and are around the Middle East and some in Africa. (Photo by Dan Shea, in the Middle East)

Not shown: Recently videos on Internet sharing sites have shown an odd looking launcher- it appears to be a grenade launcher tube underneath and AK47 variant. There is what appears to be a PG-7 grenade sticking out of the tube, and the operator launches it from the weapon. Obviously, since the RPG-7 round is a recoilless rifle, if it really was a PG-7 type round, the operator would be incinerated. More likely, from the apparent dust disturbance at launch, the PG-7 round has been altered to simply use the rocket assist motor to launch the grenade, so the range would be drastically reduced. We have no photos, just observation of the Iranian forces promotional videos online.

We nicknamed this the ‘RPG-7K’ for ‘Kurz’, because we did not get any proper name for it. First seen by this author at the Iranian DIO display during DSA 2004 in Kuala Lumpur, Malaysia, it appeared to be simply cut off behind the Venturi with a rudimentary yet robust short divergent nozzle. This small, concealable RPG-7 has not, to our knowledge, shown up in any theatre. (Photo by Dan Shea, in Malaysia)

The Iraqi indigenous RPG-7 variant is called the ‘Al-Nasirah.’ This has the Iraqi ON-M80 optic on it, designed after the Yugoslav M80 scope used on the second model Yugo M57 RPG-2 based launcher. (Photo by Dan Shea courtesy National Firearms Collection, Royal Armouries, Leeds) 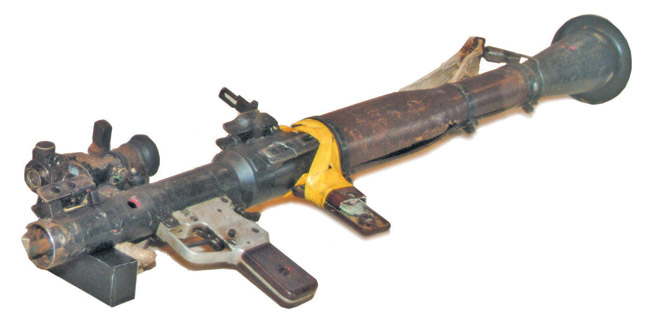 North Korea has been manufacturing and exporting the RPG-7 type launchers they make of the Chinese family. The Type 68 is out of production, but the Type 68-1 is actively offered on the world market. The telltale mark for the Type 68 series is the five pointed star inside a circle. This particular specimen was recovered off a sunken North Korean spy vessel.

PLO original manufacture, from the Russian family - The Fateh RPG-7 variant circa 1970, still found in various places in the Middle East. Conjecture: This example is from a period where the PLO was trying very hard to prove that they had full manufacturing capabilities as a country, and the cast grip and indigenous manufacturing methods, as well as the markings give testament to that. (Photo by Dan Shea courtesy National Firearms Collection, Royal Armouries, Leeds)

The IDF had a production run of the RPG-7, little is known about the production run, other than this photo taken in a museum in Israel. Quality is very good, and the serial number range could indicate a larger production run. (Photo by Dan Shea courtesy IDF Museum Tel Aviv, Israel)

North Yemen, PLO origin (suspected) - Chinese family - (Note the bipod ring at front.) This RPG-7 variant exhibits cruder manufacturing capabilities, while some components appear to be original Chinese (that is conjecture). The origin of this unit was not known, but the crossed flag markings are identified as Palestine (PLO 1970-80) on the left, and the right with the five-pointed star as Northern Yemen in the period where PLO had training camps actively working in the region. (Photo by Dan Shea in the Middle East)

Not Pictured:
We did not have a picture available, but the Pakistan Ordnance Factories have been manufacturing an RPG-7 of the Russian style for many years. Their production of the ammunition for the RPG-7 is more well known.

Poland has manufactured some RPG-7s but we have not located any examples, and get conflicting reports from manufacturers and arms experts in Poland as to what the extent of the manufacturing was. In any event, the ones discussed had the “Works 11” markings.