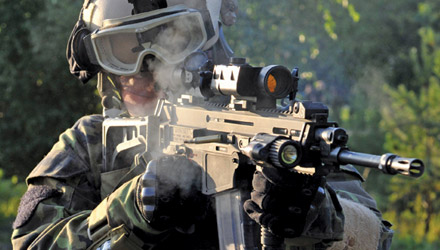 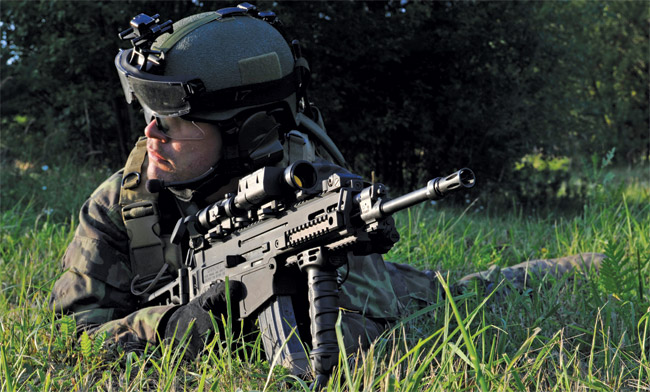 The choice of the name for the brand new Czech modular battle rifle has set expectations high. Bren, the Czech LMG designed for the British on the eve of World War 2 lives forever as a paragon of perfection: an infallible machine gun reliable to the point of indestructibility. Will the new Czeska Zbrojovka’s Bren live up to that proud moniker?

The end of the first decade of the new millennium saw Czechs and Slovaks as the Last of Mohicans in the Unified Europe: the only country with its own creative rifle possibility to use 7.62mm caliber for the main battle long arm.  The Sa-58 (Samopal vzor 58) rifle, the mainstay of the Czechoslovakian People’s Army (Ceskoslovenska lidova armada, the CSLA) has been in use since the early 1960s, when Czechoslovakia became the only Warsaw Pact country not to introduce a clone of Kalashnikov’s AK/AKM series.  Despite superficial likeness, the Sa-58 had nothing in common with the AKM except for age and a cartridge.  The receiver was machined, while in the AKM, the 1959 replacement of the original AK, the receiver was stamped of sheet-metal.  It was a striker-fired rifle vs. hammer-fired in AKM, had a short-stroke piston, as opposed to a long-stroked Russian piston, it was fitted with a lock hold-open device operated by a magazine follower, which the AKM never had, and the locking was accomplished by a tilting wedge, not rotary bolt.  Even the muzzle thread is different, and the Czech cleaning rod has female socket, where Russian brush needs a male thread.  Yet there are still some around who refer to the Sa-58 as ‘the Czech AK-47’ (as if misusing the prototype ‘AK-47’ moniker for a mass-produced AK wasn’t enough abuse).

Arrested Development
However, what was modern in the 1960s, in 1970s proved to be expensive and non-modifiable.  As early as 1977 a program was thus started to design a modern replacement chambered for the smaller caliber bullet.  In 1977 Miloslav Fisher of the Brno’s General Machine-Building Plants R&D Center (Vyzkumne vyvojovy ustav zavodu vseobecneho strojirenstvi) or VVU-ZVS (also known as the Prototypa Brno) started the ‘Lada S’ study, to examine the possibility of re-arming the CSLA with a domestically designed and manufactured rifle, chambered for the Soviet 5.45mm round.  Several years of research and preparations resulted in green-lighting the design in 1984.  The study’s cover name, Lada (a popular Slovakian female first name) became the cover name of the whole program, led by Bohumil Novotny.  It aimed at creating the three gun ‘family’ of unified design small arms, consisting of a subcarbine with 185 mm long barrel, an automatic rifle with 382 mm barrel and a 577 mm barreled Light Support Weapon.

Thanks to the case deflector the spent cases are thrown clear to the front, enabling ambidextrous use despite the fixed ejection direction. (Martin Helebrant)

The similarity of the concept to the AK-74 family consisting of AKS-74U, AKS-74 and RPKS-74 was not at all accidental.  The new Czechoslovak rifles were downright Kalashnikovian in both idea and detail.  The only points different were the stiffer, slide-on / slide-off receiver cover, peep-style battle-sights, and the Galil-style thumb-operated safety-selector lever, but devoid of the AK-trademark long selector lever / cocking slot cover.

The design was ready by the end of 1985; prototypes were manufactured and tested in 1986.  After many failures and recoveries the third generation of these was finally approved for production in November 1989.  The new rifle was then running perfect, which sadly cannot be said for the state that commissioned it.  In 1989 the Communist Bloc undermined by Gorbachev’s glasnost from one side, and Polish Communists sharing power with Solidarnosc opposition movement from the other, started to fall apart in a rapid ‘domino theory’ style.  Then in late November and early December came Czechoslovakia’s turn.  After several days of demonstrations, the Communist Party gave way and finally relinquished power in what became known as the Velvet Revolution.

Lada: The Little Orphan
As of February 1990, the Lada system was declared fit for production, but nobody was interested in it any longer.  As the Czechoslovakian program did not involve production of the 5.45x39mm ammunition (as opposed to the Polish one), conversion to the 5.56x45mm was the only logical solution – more so as the country’s ammunition provider, Sellier & Bellot in Vlasim, was already making the .223 Remington with M193-style FMJ and JSP bullets.

At first there was talk of ordering 300,000 new rifles and a tender was held to choose the system integrator and future manufacturer.  The offer by Czeska Zbrojovka Uhersky Brod (CZUB), a 1936-established national arms maker, was given priority due to its rich experience in individual small-arms manufacture, including the Sa-58 and the vz.61 Skorpion machine pistol manufacture for the CSLA. 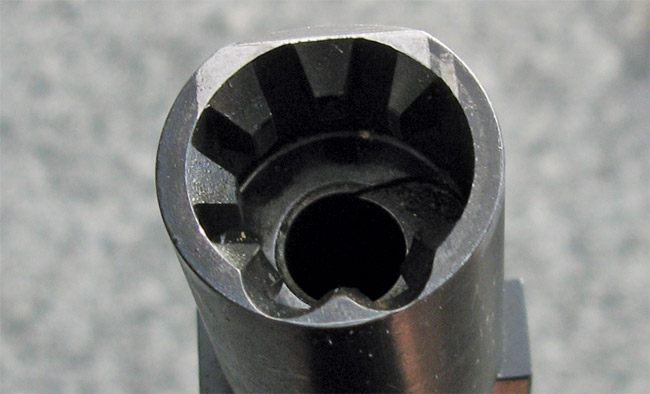 But the Army was penniless, and state (at that stage called the Czecho-Slovakia, after what came down in history as the ‘hyphen war’) was now on the verge of separation, with political fire being stoked by extremists on either side of the national divide.  Fortunately the ‘hyphen war’ was the only one fought there, and everything ended peacefully, in what was dubbed the Velvet Divorce.  In 1992 the history of the Czechoslovakia was over after 74 years since November 1918, when Hungary’s and Austria’s Slavic lands were united, forming the new state under the influence of Thomas G. Masaryk, who became the first Czechoslovak president.  As of January 1, 1993 there were two separate states: Slovakia and Czechia (Bohemia).

Now the new rifle was in dire straits indeed – the smaller the army, the less chance to be manufactured in numbers.  At the same time CZUB got privatized, and as a private enterprise it had to earn what it was to spend on the new rifle design – not just draw it on the state’s budget, as previously.  For five long years the Lada program got lost from the radar – gone, but never forgotten.

Enter Mr. Findorak
After the NATO doors were cracked open with the Partnership for Peace, giving a renewed hope of the full membership soon, the NATO-caliber rifle program was once again hauled forth from the backburner.  NATO-caliber – but not the STANAG magazine: this conversion would have called for a wholesale re-designing of the receiver and so was deemed too expensive.  The new Lada still had an AK-74 compatible magazine – but was now chambered for the 5.56mm (even though the surviving samples are stamped ‘.223’).

Several Czech designers and companies approached CZUB in the meantime, offering other rifles instead.  One of them was Ladislav Findorak, ex-Army officer, who endorsed a delayed blowback system based on Soviet Anatoli Baryshev’s designs.  This was a bold proposition – a complete weapon family called LCZ, made up of the same design but different size building blocks, which put together were to give anything from automatic rifle up to a .50 cal. heavy machine gun and even a 30mm grenade machine gun.  CZUB partly financed his scheme and tested the resulting weapons, but chose not to continue.  Findorak then started his own company, known under the English-language name of Czech Weapons in Slavicin, but both partners parted on good terms, and CZUB was impressed with Findorak’s ability in weapon designing. 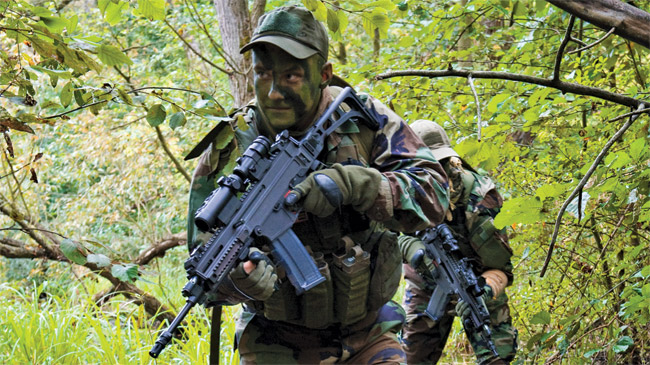 Other than Findorak, two other rifles were considered, one designed by a British team for another English-named Czech company, the Moravian Arms Company and the other option was license from Colt’s to manufacture AR-15 rifles (M16/M4).  CZUB had great designs for the then struggling Colt, but all that was left of it was a less-than-spectacular Colt Z40 pistol – and the starting of the CZ-USA subsidiary, who now owns Dan Wesson Firearms.

CZ 2000 vs. Project 805
The Army of the Czech Republic (Armada Ceske Republiky, ACR) was once again interested in the new rifle, but this interest eventually failed to bloom into contracts.  The CZUB was now left with no other way than to develop the Lada and find a buyer – if not at home, then abroad, trying to capitalize on the good standing of the CZ brand and the need for modern Kalashnikov derivatives in Western chambering.  But to sell abroad the Lada needed a name that was (a) sexy and (b) involved ‘CZ’ to marry it to the brand.  At the turn of the century ‘2000’ seemed to mesmerize buyers and sellers alike, bringing with it a promise of the modernity – more so for what was in fact nothing more than a face-lifted AKM.  Thus the CZ 2000 was born, sometime accompanied by the name Lada, sometimes not.  The CZ 2000 was a name used only for PR.  For in-house use, the whole ‘Army Rifle Replacement’ program was dubbed the Project 805, according to the new classification scheme, in which model numbers were assigned according to the nature of the product.  Assault rifles and SMGs were assigned series 800 – that’s why the civilian-legal Sa-58 was called the CZ 858, and the 9mm silenced Skorpion prototype with a fixed stock was the XCZ 861.

The New Rifle
It was only in late 2005 that CZUB decided to go whole hog and make their own rifle anew.  The Army was not yet inclined to change the battle rifle for the entire military, but they nevertheless managed to buy a batch of Bushmaster M4A3s for the Special Forces.  The situation could have slipped out of hand if the Army continued to re-arm itself piecemeal, instead of a large-scale re-armament – so CZUB bolted into action.  A totally new specification was drawn, finally putting the stillborn Lada to rest.  The new rifle was first called the CZ XX, then CZ S805.  The S stood for ‘special’ to differentiate it from regular CZ 805 (no S), being a tricked-out Lada carbine with rails all over and an ambidextrous selector lever, designed for India (but never bought).