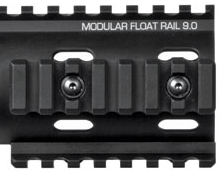 Daniel Defense has announced plans to immediately offer a new variation of the popular MFR 12.0. The new variation of the MFR, Modular Float Rail, will be offered in a new 9 inch length option in conjunction with the popular and currently offered 12 inch variation. The original MFR 12.0 was the defining feature offered on 2011’s second most popular Daniel Defense rifle, the DDM4 V7. The shorter, 9 inch version of the MFR accentuates the feature characteristics that made the 12 inch version a success: lighter weight, modularity, continuous uninterrupted top rail, and three adjustable 3-inch Picatinny rail sections at the three, six, and nine o’clock positions. Those same features are now being offered in a shorter version that allows for greater flexibility in barrel length choices. Regardless of the length, 12 inch or 9 inch, the MFR has an outside diameter of 1.76 inches and an inner diameter of 1.61 inches. The total weight of the MFR 9.0 is 13.39 ounces, which lends itself well to Daniel Defense’s tagline of Lighter. Stronger. Better.. For more information on both the MFR 9.0 and MFR 12.0, be sure to visit www.danieldefense.com.