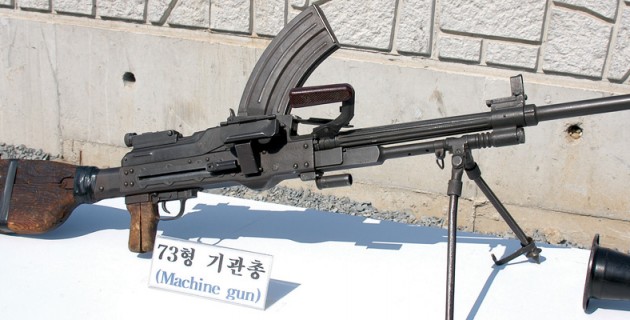 Type 64
The first handgun ever developed and manufactured by North Korea was a Type 64 (1964); but, in fact, it wasn’t actually ‘developed’.  It was a very close copy of the FN 1900.  The reason why North Korea made a copy of the Browning 1900 during the 1960s, when there were already a bunch of good .32 ACP pistols to consider, especially the PP lineup, is very unclear; perhaps North Korean officers and engineers were very familiar with the gun, which was relatively abundant in Asia during 1900-40s, or maybe it was considered by North Korean leadership as a very important weapon symbolically. In 1909, a patriotic ex-Korean army officer who lost his position because of the Japanese (the Japanese army forcefully disarmed and disbanded the Korean army in 1905), shot and killed a Japanese politician who had played a major part in the colonization of Korea by Japan.  The weapon used at that time was the M1900.  Since this incident is very well known in both South and North Korea, it was probable that the North Korean leadership chose the M1900 to be very symbolic for them, especially since North Korea is very proud of their ex-leader Kim Il Sung’s history as an anti-Japanese warrior.

Whatever the reason is, North Korea issued the Type 64 to high-ranking officers while others used the Russian-supplied TT33 (Tokarev).  Some of these Type 64s were also fitted with silencers for special operations.  Note that the silencer uses an eccentric style where the bore is off from the center of the suppressor.

Type 70
It was very clear that the Model 1900 was already an obsolete design in the ‘60s; and North Korean designers soon had a new design, this time indigenous.  It was the Type 70 (1970), a simple blowback .32 ACP pistol with exposed hammer.  It’s design was perhaps inspired by the FN 1910, the Walter PPK and Makarov pistols, but it’s single action and very simple (unlike the PPK or Makarov), and has a very strange manual safety- it’s a cross bolt type, but not easy to use because it’s just above the trigger, and the manual safety also works as barrel holding latch.  To field strip, one has to pull the safety out first.  The magazine holds 7 rounds. During 1968, North Korea began fielding another pistol, this time a full-size/full-power one. This was the Type 68, which is basically a Tokarev with some changes.

Baek-Du San
Until the 1980s, North Korea’s military used the Type 64 and the Type 70 for high-ranking officers and the Type 68 for others who need sidearms.  In the late 1980s, the Type 68 was gradually replaced by a new handgun, the Baek-Du San (White Head Mountain), in 9x19mm.  This is a very close copy of CZ75 of that era, but experts doubt that technical support to make it was actually supplied from China as is assumed.  The Chinese happened to make a copy of the CZ75 (the NZ75) around that time.  Unlike the NZ75, the Baek-Du San is designed very closely after the original CZ75 (rumor has it that this was adopted because of Kim-Jung Il’s personal orders).  He was a known collector and shooter of firearms, and he had ultimate power in his country.  If he actually ordered them to adopt it, nobody in North Korea would resist.  The fact that the CZ75 is an excellent handgun notwithstanding.

While North Korea makes military handguns themselves, they imported considerable numbers of foreign handguns.  The most notable one is the Baby Browning, which was occasionally found during the 1970-90s.  They were a favorite sidearm for North Korean spies, almost always with a sound suppressor, which is believed to be made in North Korea.  Considerable numbers of Canadian built John Inglis High Powers were found with North Korean spies or Special Forces during the 1960-70s.  These were probably supplied from a Chinese stock of lend-lease weapons left from WWII.  In the 1990s, Czech-made CZ82s were also found with North Korean spies, these usually had the North Korean built suppressor as well.  Essentially, there is a very active arms manufacturing community in North Korea.

Type 49 (PPSh-41)
The Type 49, or Model 49 submachine gun was made in large quantities in North Korea from 1949 until approximately 1955.  This is a direct copy of the Soviet PPSh-41 submachine gun in caliber 7.62x25mm Tokarev (7.62TT).  The Type 49 is a straight blow-back, open-bolt type submachine gun, with a rate of fire approximately 850-925 rpm, from either 71 round drums or 30 round curved stick magazines.  These have been exported to North Vietnam during the war there, as well as numerous other places- and are still in use in outlying districts and sublevels of North Korea.  Recognize by the slight oval shape to the rear buttstock, and the marking of a circle with five pointed star within it. VZ-61 Skorpion
The Czechoslovakian made VZ61 machine pistol is reportedly still in use by covert operatives of the North Korean government.  These were obtained at various times in the 1960s, 1970s, and possibly 1980s, and have the standard grey paint finish, with 10 and 20 round magazines.  Caliber is 7.65 Browning (.32 ACP).  These have a high rate of fire, are very concealable, and when the suppressor is used, very quiet.  The most recent event in which a Skorpion was found was in 1998, when the dead body of North Korean spy with diver gear was found on a South Korean beach.