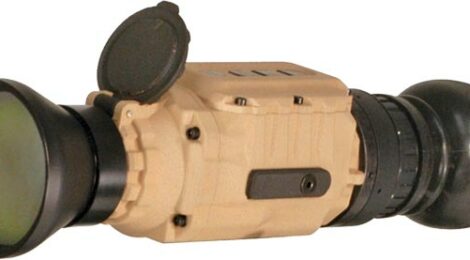 Nivisys Industries has announced their latest development in weapons mountable thermal technology for professional users.  The newly released UTAM-32 incorporates a 320 x 240 U.S. manufactured, uncooled VOx thermal sensor with upgrade plans to a 640 x 480 format in early 2010.  One of the most valuable features of the UTAM-32 is the integrated, fully programmable weapons reticle.  The user has a choice of 5 reticles and has total control of adjustment of the azimuth and elevation of the reticle within the sight.  With an operational weight of just under 14 ounces, the UTAM-32 is not limited to use as a weapons platform.  It has been designed to be head – or helmet – mounted and performs exceptionally well in its primary function as a hand-held unit.

Nivisys Industries is also offering a threaded afocal lens that provides 2X, 3X or 4X optical magnification in addition to the internal digital 2X magnification function standard on the UTAM.  Other features include on-board, 200 image video capture and a revolutionary 20-pin interface that allows for a wide variety of user options including video output, laser pointing, external power supply interface and remote control functions.  The unit is powered by two CR-123 batteries, providing continuous operational time of more than 6 hours.  The UTAM-32 will be produced in three production colors: black, coyote brown and subdued green.  Other options include a helmet mount, shuttered eye-cup and a fully detachable, Mil-Std-1913 compatible weapons mount.

Nivisys’ Vice President of Business Development, Tom Horwath, states “The UTAM-32 is a very compact and versatile thermal imager that exhibits state-of-the-art performance and is suited for military, law enforcement and other specialized organizations with a need for modern thermal imaging capability.  The UTAM’s rugged design is Mil-Std-810F compliant and provides submersibility of the unit to 66 feet (20 meters).”

Nivisys Industries, a Tempe, Arizona based company, has stated that the UTAM-32 is in production with availability by July 1, 2009.  The UTAM-32 and the entire Nivisys product line can be found at the company website www.nivisys.com.

by SADJ staff on 16 August, 2011.
Tags: 2009, UTAM-32, V1N3, Volume 1
← 40mm Automatic Grenade Launchers: Product Improvements and Training Enhancements
International Legal Affairs: Volume 1, Number 3 →
Distributed at trade shows worldwide, Small Arms Defense Journal is a bimonthly publication that focuses on small arms, accessories, gear for the soldier, new products, industry news, and defense trade shows. The first issue of SADJ was Spring 2009, which launched at the LAAD show in Rio de Janeiro, Brazil. SADJ (pronounced “sage”) is targeted toward military, law enforcement, and defense industry professionals. Our job is to reach these groups and tailor content to their interests while producing a publication that is applicable to an international audience.