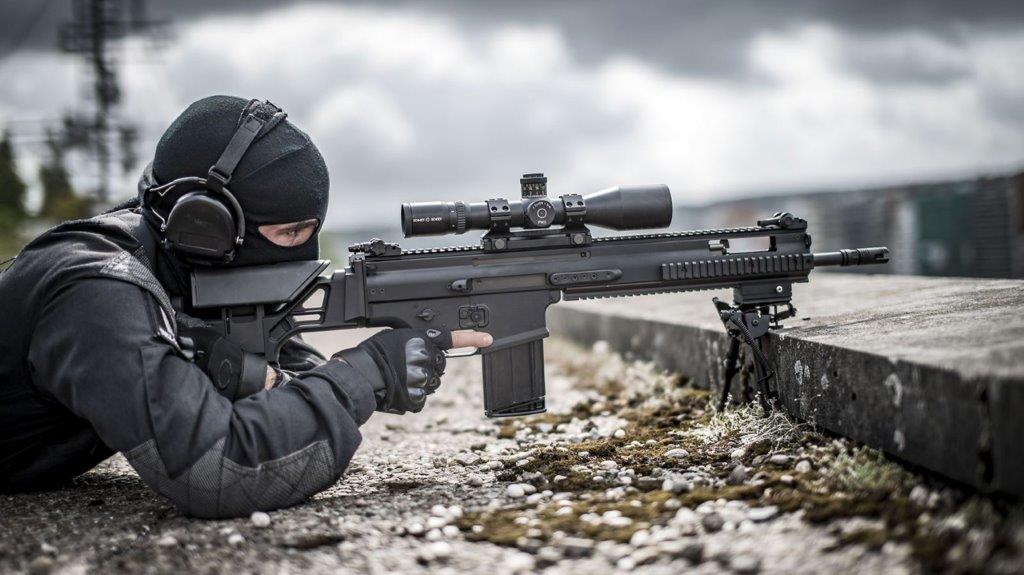 New Guns for The French Army

Via a message dated January 6, 2020, the French Ministry of Defence announced the choice for the replacement of the Model 1950 pistol and the FR F2 sniper rifle. Other pieces of combat equipment will also be replaced: battle dress, helmets (25,000) and body armour (96,800).

Designated “PANG” (Pistolet Automatique de Nouvelle Génération or New Generation Automatic Pistol), the program started with a call for tenders on March 19, 2019. The DGA (Armament Head Office) sought to purchase 74,596 pistols, some of them with accessories (night shooting devices, silencers) and 51 million 9mm cartridges. Training devices, holsters, carrying cases and cleaning kits will be joined to the procurement.

The need was 80% for the Army, 12% for the Air Force and 8% for the Navy. The registration of weapons candidates was closed on April 12, 2019, and the winner is to deliver the order in less than 48 months.

The weapons were to be furnished with repair kits, spare parts, training material and technical manuals. The winner was to be the manufacturer proposing the lowest price, after the pistols passed the tests and met the technical features.

Professional references were needed for all candidates, which also had to show a turnover of more than 50 million euros continuously over the last 3 years. They also had to be settled in the European community (except for any electronic night sights).

This excluded any French manufacturer. Years ago, French politicians voted to close the state-owned arsenals and additional anti-gun laws had the same results on private factories.

Tests of the new pistols were completed between April and December 2019 with models presented by CZ, GLOCK and HS Produkt. Other companies such as Beretta, FN Herstal, Heckler & Koch (HK), Steyr and SIG SAUER did not compete.

GLOCK
The GLOCK 17 Gen5 with a B&T suppressor.

The technical features requested were very strict: 17-round magazine, or more; technical commitment for a long-lasting service; short period of delivery, with penalties if overtaken; ambidextrous bolt stop; and a low price, for example.

Finally, a competition took place between CZ with its P-10 C, HS Produkt with its SF19 and the GLOCK 17 Gen5, the latter being selected for adoption. This result was contested by the dealer of the Croatian pistol, HS Produkt, who didn’t agree with the results of a magazine speed loading test by a female soldier. A plea before the administrative court was rejected.

The GLOCK pistol will be made in Austria at the GLOCK factory in Deutsch-Wagram, 10 miles Northeast of Vienna. Created by Gaston Glock in 1973, the factory produced combat knives and shovels made of steel and plastic. He entered the family of handgun makers in 1980 by creating with Wilhelm Bubits a powerful pistol, the conception of which was revolutionary.

Adopted by the Austrian Army in 1982, the pistol has many variations in various calibres and a worldwide  distribution. More than five million were made, and a factory was built in the United States in Smyrna, Georgia.

In France, some GLOCK pistols were already used by several units, such as police, Gendarmerie, Air Force security and Special Forces.

The GLOCK 17 Gen5 has a polymer frame with metal inserted parts. The trigger guard is square with a serrated front. The grip is grainy on its front and sides; its back can receive interchangeable back straps to accommodate users’ hand sizes. In front of the trigger guard, a rail can  mount various light or sight designators.

The barrel is completely housed in the slide. The recoil spring is made of flat coils with a plastic guide. The slide has a square shape, with an ejection port at the top right and serrations at the rear and the front. A safety is integrated on the trigger. It has an ambidextrous bolt stop, located on both sides at the top of the grip. The rear sights are “U”-shaped, and the front sight is square. The polymer magazine with a thin metal insertion is located in the grip. The magazine lock is on each side, near the lower part of trigger. The magazine well is flared. The pistol works by short-barrel recoil. The barrel is cylindrical with a cubic rear part which locks into the ejection port. The firing pin is cocked before bolt closing.

The price of the  entire sale (gun, ammunition and accessories) is 44 million euros. GLOCK will furnish the pistol and the night sighting devices; ammunition will be made by Sellier & Bellot in the Czech Republic to include:

Also to be furnished are:

The replacement of the French forces’ sniper rifle followed the same procedure, with a call for tenders opened on August 16, 2019, and registration of weapons candidates closed on October 5, 2019. There was a short delay, and the candidates had to present proposals to meet the following requirements:

Conditions for candidates were the same as for the pistol competition for location of subscribers and for turnover. But some manufacturers did not compete. For example:

Subscribers were the following grouping companies:

Only Safran and OIP were selected. OIP won because the price was lower.

The German-Belgium partnership specially organised for the French offer is:

Note that FN was present in the two proposals.

The SCAR, or Special Operation Forces Combat Assault Rifle, was developed for American Special Forces as a modular system to replace other materials. It was developed in two versions: 5.56mm (L) and 7.62mm (H). Research began in 2001, and the first specimens were delivered at the end of 2007 for testing and an adoption in 2010.

The French Army selected a rifle with a rigid stock and adjustable in length. The FN SCAR-H’s frame is made of light alloy, has a right or left cocking lever and an ejection port on the right. The pistol grip is organized like the FN FNC assault rifle.

The handguard has four Picatinny rails and  can utilize a front grip. The bolt and the 20-inch barrel are made of steel. The frame is made of light alloy, and the pistol grip of polymer. It has a black or tan finish. The rear sights are aperture-type (100m-600m); the front sight has a tunnel. Both can be folded. The Picatinny rails can accommodate any sighting device.

The vertical magazine is locked in position by an ambidextrous push-button. The rifle works with a short-stroke gas action. The gas port has two positions. The bolt is locked by a rotating head with several locks.

Many thanks to: FN Herstal (Anne Devroye); GLOCK (Elisabeth Triebel); and MEN.