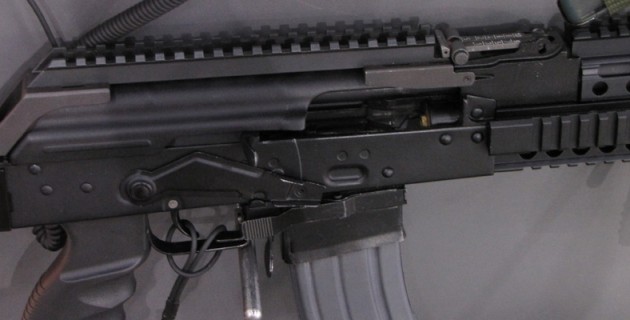 ABOVE: After Beryl was finally made to feed from the STANAG magazine, time came to reap the harvest and install a bolt stop at long last. This year’s Beryl modification with STANAG magazine adaptor was fitted with a functional bolt stop, complete with bolt release lever inside the trigger guard.

At this year’s 21st International Defence Industry Exhibition (MSPO is an acronym from Polish name of the fair: Międzynarodowy Salon Przemysłu Obronnego), almost 25,000 square metres of exhibition space was the showcase for 400 companies from 23 countries.  It is a tradition of the MSPO to designate the Leading Nation, which has a national pavilion to promote its defense industry’s capabilities.  This year was Turkey, which signified two important anniversaries in Polish-Turkish diplomatic relationship: this year is the 90th anniversary of establishing diplomatic relation between the Republic of Poland and the Republic of Turkey – but next year will be an even more solemn occasion: the 600th anniversary of establishing diplomatic relations between the Kingdom of Poland and the Ottoman Empire.  The Turks were Poland’s south-eastern neighbor and scourge for several hundred years.  Both countries fought long and hard, but in the end it was the Ottoman Empire that up until 20th Century remained the only power not to accept the division and occupation of Poland in late 18th Century by Russia, Prussia and Austria.

The honors bestowed on Turkey were more than matched by the appearance of the Mekhteran, the world’s oldest military marching band, still performing in 17th Century costumes.  The Mekhteran greeted the arriving VIPs, including the President of the Republic of Poland, Mr. Bronisław Komorowski, Poland’s, Turkey’s and Ukraine’s Defense Ministers, Polish Minister of Treasury, and Poland’s National Security Council’s Chairman.

The Turkish National Pavilion comprised half of Hall F with products from many Turkish defense industry companies, including the Otokar (armored vehicles manufacturer), as well as small arms manufacturers, MKE and Sarsilmaz.  The MKE is a many year licensee of German companies, mostly HK and Rheinmetall, so their walls of HK rifles and SMGs, as well as MG3s, were not much of a surprise to anyone.  Sarsilmaz manufactures mostly handguns – hardly innovative as one can guess their inspiration at first glance.  Their pistols are much like CZ-75s or HK USPs, with a pinch of Walther P-99 look-a-likes, and revolvers hold few secrets to anyone familiar with S&W L-frames.  Recently they ventured into the rifle market with a Black Rifle offer of their own called the SAR-223.  Their semiautomatic only and select-fire military/police propositions look exactly like a direct-impingement AR-15 of M4 proportions should or would.  But there’s more to that: a 9mm SMG/semiautomatic carbine called TE54 is not a clone of the Colt 9mm SMG (Model 635) but an original design in 9mm, with a magazine well of the lower receiver shrunk for MP5 magazines and ejection opening in the upper receiver small enough to pass only a 9mm Luger round or case, and devoid of cover.  The internals are of course completely different, with straight blowback action, but the external ergonomics are exactly the same between the TE54 and AR-15 platform, so re-training is almost non-existent. The only thing new at Fabique Nationale was this F/X Minimi, showcased at the F/X firing range that became a regular feature of the Polish distributor, Cenzin. After Beryl was finally made to feed from the STANAG magazine, time came to reap the harvest and install a bolt stop at long last. This year’s Beryl modification with STANAG magazine adaptor was fitted with a functional bolt stop, complete with bolt release lever inside the trigger guard. A prototype of the new version of the Croatian VHS-D2 rifle was displayed along with the new Croat 40mm underbarrel grenade launcher. Finally, the FA MAS style crank fire-selector gave way to a conventional thumb-operated ambidextrous lever. The flipside is that the pistol-style thumb-operated bolt-stop had to be moved somewhere else – and got on the bottom of the receiver, behind the magazine, which is not a perfect solution, to put it mildly. The case ejection direction is finally changeable now, and there’s one feature that no bullpup ever had: an adjustable butt-plate. An adjustable butt stock on a buttless rifle might seem funny, but in fact, the bullpup users also tend to wear body armor, and hitherto had to make do with non-adjustable weapons – now that problem’s gone. The grenade launcher is also highly unorthodox in having an entire barrel assembly swinging out for loading around the axis parallel to the barrel.

Mekhteran waiting for the VIPs to arrive. ZM Tarnów was this time much more low-key, presenting mostly readily available guns like the Alex family of all three sizes (7.62mm, .338 and .50 BMG). Radon-K (aka MSBS-K) with the all new conforming 40mm underbarrel grenade launcher is getting ready for a huge military debut, and was now presented with new sights. The grenade sight is of a customary quadrant style with front post and notch – but there’s also a cleverly shaped mounting rail to attach, for example, the Meprolight grenadier sight. The sighting unit sitting on the main rail is a new product from PCO – the Szafir. The RGP-40 revolver grenade launcher form ZM Tarnów is also still living and on the brink of acceptance into the inventory: this year’s MSPO saw two versions with different barrel lengths. This year’s show brought a multitude of (mostly) indigenous UAV projects, of all sizes and descriptions – gliders, fixed-wing tractor and pusher aircraft, as well as helicopters, for reconnaissance and tactical use – like the ILX-27 unmanned helicopter gunship prototype armed with a ZM Tarnów 4-barreled .50-cal. Gatling gun.