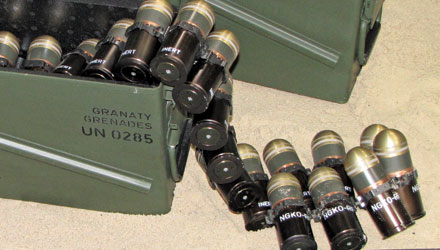 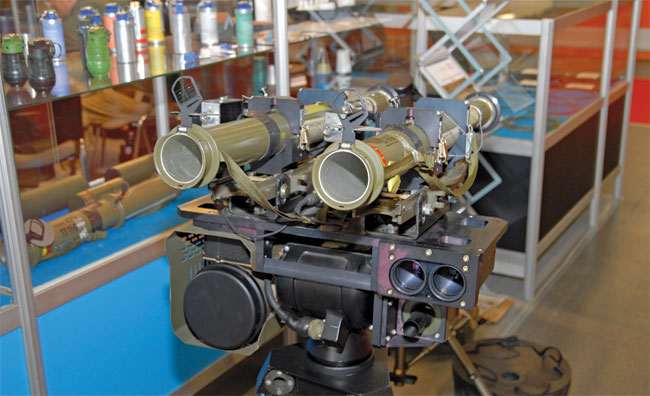 This ungainly looking thing is a double-barreled Czech RPG-75 LAW-style AT grenade launcher, now coupled with a sensor and servos suit to be utilized as a kind of an MPBK surrogate: an automated sentry – or an ambush-machine.

ASG Beryl and Beryl 22
Army rifles and pistols notwithstanding, this year’s (relative) opening of the civilian market have sparked so far little interest from the FB Radom.  There were just two new dual-use proposals from the FB: Beryl ASG and Beryl 22.  The former is intended mostly for the civilian license-free market but as of late the Army is also considering introducing the ASG variant as training weapon replicas to reduce tear and wear on real things.  The Beryl ASG is a faithful real-size and weight replica built with real thing non-essential parts and receiver altered to prevent installing a real barrel and bolt/bolt carrier.  Instead it houses a high-end Taiwan-manufactured ASG gearbox and 6mm barrel with manually adjustable hop-up.  The “trigger” mechanism retains the same fire modes as the real rifle – single, three-round burst and fully automatic.  The replica can be fitted with both ASG-style or real rifle furniture and accessories, to enhance the look and feel of the real thing.

The Beryl 22 was first displayed last year, still as a hand-made prototype – this time it was a fully machine manufactured pre-production model.  Only the magazine still needs some improvisation, but it is said to be put into manufacturing ‘soon’ as well.  The whole thing is a reborn ‘Talk’ training rifle project of the 1980s, but now based upon the Beryl rifle, instead of the formerly utilized AKM platform.  Hopefully it would fare better than the predecessor, discontinued after the Army lost interest due to economical difficulties of the mid-1980s, after the Martial Law period.  So far the displayed prototype is semiautomatic only, but if there would be interest on the buyers’ side, an automatic fire control module could be re-installed and parts made to fit it.

The Garden of Evil
A dominant feature of the Bumar-Ammunition Division’s display was the so-called Garden of Evil – two parallel sand-boxes filled with mock grass and strewn with an amazing variety of anti-materiel land mines offered by Bumar companies, along with various scattering and planting systems, basing on aerial and land platforms.  Some of the mines, e.g. the MN-111/121 family were on display in various stages of deployment – stacked inside aircraft scatter pod, in PMM portable scattering device and as sub-munitions of the 122mm rocket – then in delivery trim, with braking parachute or deploying wire/sheet-metal winglets-stabilizers, and finally in ready condition.  The 111/121 are all housed in the same, shared cylinder casing, fitting inside the 122mm rocket and contain a shaped-charge warhead – thus the required stabilizers, ensuring their vertical placement to boost effectiveness against the bottom of the AFV.  The blast-operating contact MN/MR-123 mine is slightly larger in diameter, scattered from aircraft (MR) or set manually (MN). 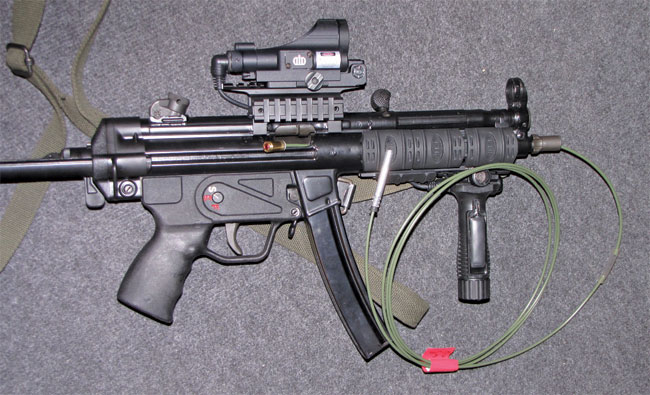 MP5 as a detonating network igniter? Why not – with the novel Works 11’s NSD ‘nonel’ it is now possible. Note clear plastic muff connecting the final length of tube inserted into the muzzle with the rest of the igniting tube.

AT Mines – No Longer Dumb
By far the most interesting on display were the larger “non-contact” EFP off-route anti-tank mines, aiming at the sides of the enemy armored fighting vehicles.  EFP means explosively-formed-penetrator – the name implies the method of operation.  When the target AFV crosses the line of sighting within effective range, the mine detonates a special shaped charge, which hits the armor not with just a jet of hot gases, like the classical contact-detonated shaped-charge, but forms a projectile out of its metal liner, capable of breaching substantial thickness of armor plate.  The static MPB (Mina przeciwburtowa – Side-Targeting Mine) can be fitted with IR sensor-triggered fuze, set off-track and still pierce 100 mm of homogenous steel at 50 meters.  This is a smart mine, if there was one ever – never lets the enemy touch it (anti-handling device), but self-destructs after a pre-programmed delay of 1, 10 or 30 days to avoid collateral damage.  But an even more interesting application is the perimeter-defense off-route mine. The MPB’s down side was that it only operated along one direction, parallel to its longitudinal axis.  The MPBK is a bit more sophisticated – placed on a turntable, operated by a sensor-activated servomechanism, it automatically detects, locates and tracks the target until it presents itself broadside at the most effective range.  Several years ago a sister unit of the MPBK was also displayed, now conspicuously absent – the anti-helicopter mine.  This was in effect an MPBK but fitted with advanced three-axis steering and acoustic sensors designed to detect, locate, lock and then track a low-flying helicopter, eventually firing an EFP at it.  The individual mines’ sensors operated independently, allowing the simultaneous tracking and shooting at the helicopter by groups of mines set in larger “anti-aircraft mine fields” – or anti-helicopter barrier protecting one’s own troops from a roaming enemy rotary wing threat, trying to sneak in with ATGMs at tree-top level.  Asked about the fate of this ingenious system, the reps were biting their tongues and rapidly changed the subject.  Soon in the forest near you, would you say?

Anyway, the MPBK-ZN variant displayed this year had another smart feature: these mines are too expensive to be single-used, so their anti-handling devices are programmable, and the mines can be cleared after a pre-programmed period, then replaced and reset to counter another threat elsewhere. 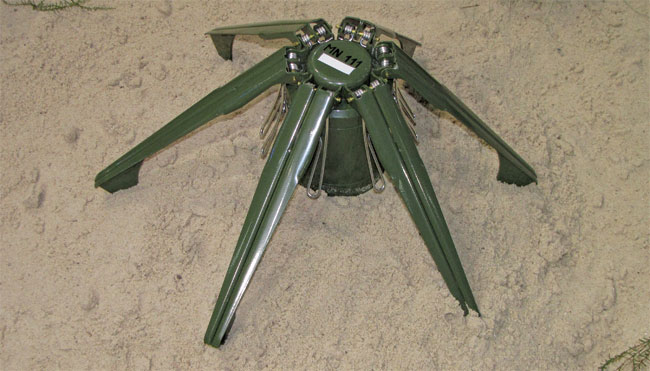 This ugly-looking mechanical spider is in fact an air scattered anti-tank mine, the MN-111.

40 Mike Mike
Another exhibitor of the Bumar-Ammunition Division was Dezamet of Nowa Dęba, renowned for its mortars and mortar bombs, as well as 40mm ammunition, LV and now HV as well.  ZM Tarnów’s 40mm automatic grenade launcher is still in labor (like 15 years now…) so the Army bought several dozen second-hand Mk19 Mod3s to fill the gap, and is casting its prying eyes at HK GMG or CIS AGL of Singapore: but still lacks money to buy them in sizeable quantities.  Meanwhile Dezamet finally cured their 40mm HV ammunition of their teething problems and has a ready proposition for the Polish Army and anyone interested.

The other proposition from Dezamet is the RGP-40, a new gas-released, spring-operated revolver-type MGL – another Milkor look-alike carefully designed to avoid patent infringement, but never really able to shrug off the family likeness.

Works 11 NSD
Explosive charges can be detonated with various firing systems, generally divided into two main branches: electric and non-electric.  Both have their pros and cons, but ‘nonels’ as the non-electric systems are known, are usually simpler and easier to deploy, especially under combat conditions.  There are no circuits to be broken, no electric generators and testing apparatus to be carried, no batteries to go off at the least convenient moment – and no imminent danger of electromagnetic impulse generated by the circuit itself.

The Polish company Works 11 from Katowice is a specialized military equipment dealer, but last year they decided to branch out into production of the novel NSD ‘nonel’ – a battlefield detonating system based on pentrite-lined (sputtered) plastic tubes, carrying the ignition flame to the detonating charge over virtually unlimited range, as long as the tube network stays integral.  Length of tiny (2 mm diameter) tube delivered on spools can be connected with plastic “muffs” and branched out with multi-port muffs.  The most novel feature, however, is the ignition charge, which is shaped as the pistol round, converting any handgun or SMG into a firing device for the NSD detonating network. All one needs to use it, is to retract the slide or bolt, insert the tube into the bore from the muzzle end towards the breech, through the ejection port, plug into the igniter shell, then chamber it, close the bolt and pull the trigger.  The ignition disintegrates the tube, so the spent igniter is removed by simply racking the slide, at the same time enabling to chamber a live round from the magazine, getting ready for a firefight, should the need arise.  Igniters are available in all popular handgun calibers – 9mm, .40 S&W, .45 ACP – but any other caliber igniters can be tailor-made to order.