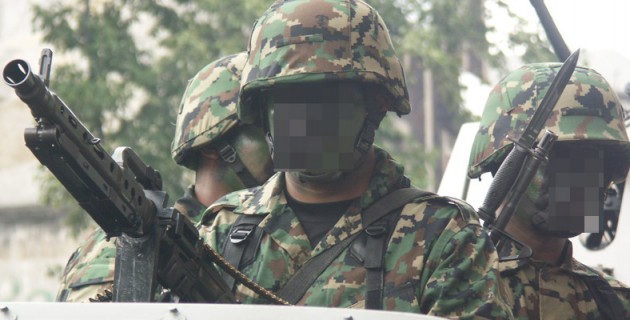 ABOVE: Mexican Marine with a CETME Ameli LMG on a MB G Wagon light vehicle.  The Ameli is chambered in 5.56mm and has a rate of fire of 900 rpm.

One day in November 2010, the battle to get Antonio Ezekiel Cárdenas Guillén, one of the most feared and wanted drug lords in Mexico, had lasted eight-hours.  The Scorpions – the capo’s own army – presented a stiff resistance to hundreds of soldiers and federal policemen while a 660-strong Marine battalion fought its way to his whereabouts in Matamoros.  This is a small city in Tamaulipas, just across the border from Texas.  The government forces were supported by 17 military vehicles and 3 helicopters, while the Scorpions fought back, deploying some 80 SUVs – some of them armored – high powered rifles and fragmentation grenades.  Officially, the aftermath left 3 Marines and one soldier KIA, along with four others, to include Cárdenas Guillén, but other sources point to as many as 50 dead.  A year earlier, Marines had hunted Arturo Beltrán Leyva, another feared capo, to his hideaway at Ahuatec, Morelos.  Two hundred Marines, supported by an Mi-17, fought a two-hour battle against Beltran Leyva and his bodyguards, while army armored vehicles provided support to the government forces.  In April 2012, Mexican authorities, led by Naval Riflemen, arrested Marco Jesus Hernandez Rodriguez, also known as Marcos Jesus Rodriguez, aka “El Chilango,” in Jalapa, Veracruz.  This individual was presumed to be a local leader of Los Zetas, one of the most brutal and feared former guns-for-hire (“Sicarios”) gangs, and now drug cartel on its own, in Mexico and Central America.  The operation to capture El Chilango had special meaning for the Mexican Marines since he was considered the mastermind of the kidnapping and murder of at least four of their comrades in recent days.  He was also one more of the bad guys added to the list of criminals hunted down by the Mexican Navy. The hunt for those two mentioned capos, and many others, has been achieved with the use of data coming from the U.S. Drug Enforcement Administration (DEA).  The battles have also showed the difficult and brutal nature of this war.  It has been said, for some time now, that the U.S. government turned to elite units of Mexican Marines to go after drug cartel bosses, and indeed, by 2012, the Marines had been tasked with rapid-strike operations, many times using information provided by the U.S. Drug Enforcement Administration, and resulting in the delivery of lightning raids against the capos.  The arrival of the new President, Enrique Peña Nieto, promises yet another change in the role of the Marines in this vicious war.

In fact, the game was changing several weeks before the Presidential elections, when in May 2012, Mexican Marines once again seized weapons and ammunition in a location at Piedras Negras, Coahuila, but this time they also captured a complete manufacturing installation for Marine uniforms and protective vests to be used by sicarios of the drug cartels.  The material confiscated included 225 protective vests, 170 battle dress shirts, and 151 corresponding trousers.  This bounty was particularly worrisome since, as already indicated, the Marines have been spearheading the fight against the drug cartels. Transformation
As with other governmental forces in Mexico, the Navy has been reorganized and reequipped, and geared to fight organized crime and drug trafficking.  The change, equipment and reorganization affects the Mexican Marines since it has transformed from a coastal security force into a police intervention force.  The most radical changes have taken place during the Calderon Administration, when the Marines became tasked with spearheading the fights against the drug lords around the country with 33 intervention battalions (to include the two HQ and Presidential outfits).  In addition, the marines deploy in two Reaction Forces, and there are three Naval Special Forces units (with a fourth mentioned more recently).  In order to implement the changes, the government changed 10 TOEs specifying the formation of 30 (intervention) Naval Infantry, 2 Naval HQ and 1 Presidential, plus some 12 Reaction Force Battalions.  The Mexican littoral has been divided into 7 regions, 13 zones and 14 naval sectors.

The changes also allowed for the incorporation of some 10,000 new elements.  Initially, the mentioned reinforcements were to form the nucleus of a new Maritime Police, but when this formation failed to materialize, these recruits were assimilated by the Marines.  The creation of the 30 new battalions required the relocation to new installations, and a new General HQ at the Federal District, and come with the redistribution of another 5,000 riflemen.  It was expected that by the end of 2012, the Mexican Marines would field 30,000. The Naval Infantry quickly transformed from their organization in 1996.  At the time, the service was composed of 5 Marine Brigades operating from 6 Regions, 9 Zones and 11 Sectors. The Maritime Secretariat Agreement 88 entered in effect on July 8, 2007, assigning the Navy, and Marines in particular, the mission to engage crime head-on, and providing it with wide maritime police powers.  This solidified the formation of the Marine intervention battalions using personnel from the Army’s Amphibious Special Forces Group (GANFES).  In May of that year, the National Defense Secretariat (SEDENA) expected to use the 3,500 soldiers from the GANFES as the backbone of the CEFAF (Cuerpo Especial de Fuerzas de Apoyo Federal).  Sometime later, SEDENA chief, General Guillermo Galván Galván, and Maritime Secretariat (SEMAR), Admiral Mariano Francisco Saynez Mendoza agreed to transfer the 36 Grupos Anfibios de Fuerzas Especiales into the Marines, along with over 13 million dollars in equipment, to include 143 naval interceptors, 110 smaller launches, 6 Zodiacs, and 8 jet skis, and this helped to expedite the expansion of the Marine ranks.