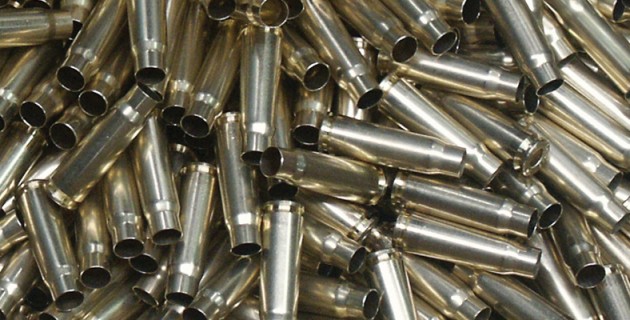 Mesko, Poland’s leading ammunition manufacturer turns 90 this summer.  From the beginning it was meant to provide the Polish Army with high-quality ammunition – and within the intervening years that’s what the plant, through its many guises, always did.

The Beginning: 1922-1939
The history of Skarżysko-Kamienna, a town of now 48,000, started in 1923.  Prior to that only a village called Milica was situated nearby, mentioned in chronicles as early as 1183, but later lost amongst the woods.  In the 1890s the Russians, occupying this part of Poland, built a railroad connecting their fortress of Ivangorod (now Dęblin) with Sosnowiec on the fringes of Silesia.

In 1922, the Central Military Production Plants Authority in Warsaw sent Mr. Leonard Łabuć (future first director of the State Ammunition Factory) with Mr. Franciszek Kuropatwiński to Skarżysko Kościelne commune to delineate a place somewhere close by the railhead, where the ammunition factory would be organized.  They chose a large forest clearing on the banks of the river Kamienna.  The new township outside Milica, where workers erecting the factory were to be lodged, was christened Kamienna and given municipal status in 1923.  Soon the first factory buildings were standing and on 25 August, 1924, the Phase I of the State Ammunition Factory (Polish: Państwowa Fabryka Amunicji, PFA) construction was finished, and the first manufacturing lines were busy filling artillery grenades. Later the factory still grew, with case-making, primers, fuzes and rifle ammunition plants built. The PFA was designed to be Europe’s most modern ammunition plant, and was built from the ground up to accommodate the very best and most modern machinery available. In 1926 the fuze department delivered their first batch for the military acceptance. In 1927 the rifle ammunition plant started manufacturing 7.9 mm x 57 rounds (8mm Mauser), and soon it was capable of delivering 1 million rounds per month, with only powder being contracted from outside Kamienna – primers, bullets and cases were all manufactured on site.

By now the PFA in Kamienna employed 3,500 blue-collar and 250 white-collar workers.  In 1927, the state-owned munitions concern of State Armament Works (Państwowe Wytwórnie Uzbrojenia, PWU) was established, with all hitherto independent factories its subsidiaries.  The State Ammunition Factory (PFA) now became the Ammunition Factory of the State Armament Works (PWU-FA).  Together with the privately-owned smaller company Z.A. “Pocisk” S.A. in Rembertów by Warsaw and the Warsaw-based, military-owned Ammunition Plant No.1 (WA-1) they supplied all rifle ammunition consumed by the Polish military.  The PFA/PWU-FA headstamp at that time (1927-1939) was comprised of the Polish Eagle at 12 o’clock on the head.  The workers’ township rapidly grew into a real city, soon thwarting and swallowing the communal authorities’ seat at Skarżysko Kościelne.  In 1928, Kamienna was thus renamed to the current name of Skarżysko-Kamienna (of which only the first part is usually used in non-formal parlance).  Milica was likewise swallowed into it, and soon became one of the city districts. Sentry armed with Sten submachine gun at the gate of the State Ammunition Factory in 1946.

The plant developed a sizeable mobilization capability reserve, which was kept busy with civilian production, cooperating with the automotive and domestic appliances industries.  The PWU-FA had its own Bureau of Studies, where up to 500 mostly ammunition-connected designs were created and developed.  As of the mid-1930s the PWU-FA took up production of handgun rounds: the 9×19 Luger with two different FMJ ball variants; the 115-gr for the Army’s Vis (F.B. Radom) pistols and 124-gr for the Police Suomi SMGs, as well as 7.62x38R for Nagant gas-sealed revolvers used by the Police.  As of 1936, the 7.9×107 DS, the PWU-FA’s own design of high-velocity antitank rifle ammunition, was also manufactured for the wz.35 ATR.  Heavy machine gun rounds, the 13.2×99 Hotchkiss were made for the imported Hotchkiss wz.31 HMGs used by the Polish Navy.  In 1938, the 20x138B automatic cannon ammunition came into manufacturing for use in the Polish 20mm wz.38 cannon.  Other light automatic cannon ammunition made by PWU-FA was the 40x311R for Bofors wz.36 antiaircraft gun.

At War: 1939-1945
After the defeat of Poland in 1939, the PWU-FA was taken over by the German Hasag (Hugo Schneider AG) of Leipzig and Altendorf.  The Skarżysko plant operated under German control, manufacturing 7.9×57 and 9×19 German-style ammunition; in 1944 adding the 7.9×33 Kurz intermediate round, all three in steel lacquered cases headstamped with German manufacturing code “kam.”  Many prewar PWU-FA employees were forcibly deported to other Hasag plants, and more than 30,000 people died in a Nazi forced labor camp situated on the plant’s premises.  The Polish and Jewish slave workers were sabotaging the production, despite severe penalties including numerous public executions of the culprits.  Nevertheless, the large scale smuggling of ready ammunition and components by the Polish workers continued, and clandestinely loaded rounds were delivered to the partisans.

In the summer of 1944, with the Soviet steamroller gaining momentum westwards into Poland, the Skarżysko-Kamienna plant machinery and supplies were evacuated to the German subsidiaries of the Hasag, leaving only gutted ghosts of what once used to be Europe’s most modern ammunition plant. Behind The Iron Curtain: 1945-1989
Skarżysko-Kamienna was liberated in January, 1945, and the plant was ordered re-opened as soon as possible.  The first postwar manager of the PFA, Mr. Antoni Kunicki, faced a difficult task: he was left with a gutted ruin where his factory once was.  During that year though, the machinery started to be repatriated from Germany, and by winter of 1945 rifle ammunition plant started to deliver first trial batches 7.62 mm x 54R rounds.  The name was again PFA, the State Ammunition Factory, but for the first time these letters were introduced into the headstamp.  In the later 1940s, handgun ammunition was again manufactured – the 7.62mm x 25 Tokarev, as the new ‘liberated’ Poland was forcibly aligned with Stalin’s Eastern Bloc and its army was re-armed with Soviet arms.  In 1950, the case headstamp was changed from PFA to a “21 in oval” cryptic code, which replaced the letters on military ammunition since then.  The oval was discarded in 1955, but “21” is still Skarżysko’s manufacturer code featured in military headstamp.

Meanwhile the factory underwent a number of name changes.  In 1945, it was the State Ammunition Factory, in 1948 the product nature was removed from the name to conceal the real production, and the plant was given a typically Communist non-descript name of United Metal Works, Plant Nr 2 in Skarżysko, ultimately changed in 1951 to Metal Works Skarżysko, with acronym Mesko (Me S-ko) being used as a logo on civilian product lines.  During the 1970s the acronym worked its way into the official name of the factory, then Predom-Mesko Metal Works (Predom being a nation-wide domestic appliances holding company).  Mesko then made its way onto the headstamps of the civilian ammunition being made at the time: hunting rifle cartridges and .38 Special ammo manufactured for the Police.  In the mid-1980s the ‘Predom’ title was dropped and the company was called General Sikorski Mesko Metal Works as of 1988. Mesko At Large: 1990-2014
In the early 1990s, following the fall of Communism, Mesko along with the rest of the Polish defense industry was thrown into disarray.  Commercialized in 1991 as ZM Mesko S.A., and no longer the state’s top priority, the plant survived mostly on civilian lines of production, including kitchen ovens, lighting fixtures, automotive parts, mixers, meat grinders, lawn mowers and other – fortunately – indispensable domestic appliances.  New types of ammunition were started then, hoping for export deals.  Soon, however, the Army started to prepare for integration with the NATO alliance, moving from Soviet calibers towards Western ones.  9×19 Luger was to replace the 9mm Makarov, while the 5.56×45 and 7.62×51 NATO rifle rounds were to replace both Kalashnikov rifles calibers and Mosin rounds, still used for the excellent PKM machine guns.  New handgun (Wist 94), submachine gun (PM-84P), rifle (Beryl) and machine gun (UKM 2000) were designed and chambered in the Western calibers, while the HMG manufactured in Tarnów (the licensed copy of the NSV) was rechambered for the .50 BMG (WKM B).  At the same time, 9×19 ammunition was offered for export, along with .38 Special and .357 Magnum, including the (probably) world’s only .357 Magnum with a wadcutter bullet. After a few years of dark despair, Mesko finally regained footing in the mid-1990s.  In 1995, the military again started to order sizeable consignments of ammunition, this time mostly in Western calibers. Mesko had by then developed its own MANPAD, the Grom (Thunder) being a development of Strela (or rather Strela’s replacement, the 9K38 Igla or SA-18 Grouse) with Western counterparts or their own developments replacing the Russian-supplied components.  The Grom was accepted into the Polish Army in 1995, and is still modernized and updated on a yearly basis, now becoming the backbone of the Polish troops (as well as Georgian and Indonesian, with Peru declaring they will soon follow suit) direct antiaircraft defense.

In 1996, Mesko formed a consortium with Israel’s Rafael, offering to the Polish Army an Israeli Spike ATGM.  The bid was successful and as of 2003 Mesko is supplying the Polish Army with license-manufactured Spike-LR antitank guided missiles.  More than 2,000 missiles and over 260 launchers were accepted into the Polish Army so far.

In 1999, Mesko started cooperation with the Scandinavian ammunition concern Nammo, which at first concerned 70mm rockets, medium-caliber artillery ammunition and ecological ammunition disposal, but later branched off into virtually all aspects of ammunition production, with both companies exchanging their products and services and offering products using the other company’s products and components.  E.g., Mesko is making .50 BMG cases for Nammo, while Mesko-manufactured .50-Cal. ammunition features Nammo-supplied NM-series multipurpose projectiles, while most of Mesko small arms ammunition is loaded with Vihtavuori powders.  Other foreign partners of Mesko include French missile giant MBDA, Swedish SAAB Bofors Dynamics, and many others. In 2011, during an internal reorganization of the then Polish defense industry’s holding concern, the Bumar Group, Mesko was appointed a leading company of the product division Bumar-Amunicja, and to mark that occasion, the name of the company was changed again, this time to Bumar-Amunicja S.A.  Shredding a recognized trademark like Mesko for a temporary whim of a company that imploded and disappeared just two years later seems unwise enough to warrant hope, that Mesko would be back with us – and sooner than later.  But the plant itself is still very much alive and kicking for a 90 year old. Tags: 2014, Leszek Erenfeicht, V6N2, Volume 6
← Gateway to the Battlefield: A Sniper and His Optic
Putting the AX PSR Through its Paces →