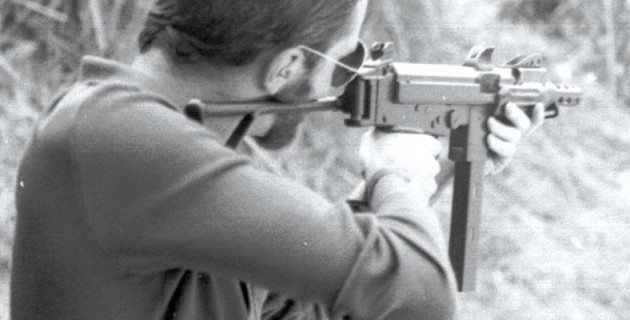 ABOVE: Author firing an MD1A1 at Fábrica de Itajubá; the weapon offering a moderate cyclic rate of fire in the region of 550 rounds per minute. Official Brazilian Army tests carried out at the Marambaia Proving Grounds, in Rio de Janeiro, were successful, but the manufacturer opted to make the subgun more FAL-like before embarking in a possible full-scale production program.

During the 1970s, Brazil’s Fábrica de Itajubá (Itajubá Factory), part of the Government-owned IMBEL – Indústria de Material Bélico do Brasil S.A. conglomerate, investigated a number of 9x19mm submachine gun designs in different configurations, none of them having passed the prototype phase. Although those early guns, in general, worked properly, the engineers of the Oficina de Protótipos (Prototypes Workshop) were also aiming at a design that not only performed adequately, but one that would also be economical to be series manufactured. In early 1979, it just so happened that IMBEL had already reached full nationalization of the Fabrique Nationale FAL rifle production in Brazil, with over 200,000 examples of the locally-designated Fz 7.62 M964 (solid stock) and M964A1 (foldable stock) versions of the well-known Belgian rifle having already been manufactured at the facilities located in Itajubá, Minas Gerais State. So, it was only a matter of short time until they came up with the idea of using off-the-shelf FAL parts (unchanged and/or slightly modified) in their subgun designs so that development time could be abbreviated and production costs reduced.

The first of such ventures was designated in-house as the M979 from the year the project began and the prototype emerged, but it was generally known simply as the “Falzinho” (Little Fal). Its more evident external physical relation to the rifle could be seen in the use of the same synthetic pistol grip, trigger guard and the trigger itself, but a closer look at its insides would reveal some other minor parts of common use. In addition to that, the upper and lower receiver (firing mechanism housing) swung open FAL-like to initiate the field stripping process. The method of operation was conventional blowback firing from the open breech position with the firing pin machined on the bolt head. The external portion of the 215 mm barrel that extended out of the upper receiver was fitted with a perforated metal jacket to act as a protection against possible burns to the shooter in case of overheating. Typical of the Number 1 prototype was its right-side folding stock, a straight, thin metal tube with a simple synthetic buttplate. The non-reciprocating aluminum cocking handle, right on top of the gun, was machined into a U-shape so as not to interfere with the use of the protected iron sights. Author firing an MD2A1, which had a cyclic rate of fire of around 700 rounds per minute.

The M979 was subsequently re-designated Sub Mtr 9 IMBEL MD1 (solid FAL stock) and Sub Mtr 9 IMBEL MD1A1 (reshaped metal folding stock), and received gradual design changes here and there, while maintaining the basic fixed firing pin bolt. The earliest prototypes employed a machined upper receiver with a pressed steel cover on it, but following examples adopted a single stamped receiver with 1.2 mm thick walls. This resulted in an overall empty gun weight reduction of 300 grams to about 3.6 kg and a cut from 43 to 19 workshop operations to make it. The wooden handguard was reshaped in contour and received wider longitudinal grooves instead of the earlier, narrower transversal grooves. Overall length was 730 mm, reduced to 495 mm with the stock folded. At least one MD1 prototype featured a small button-type cocking piece. This earliest FAL-based submachine gun performed pretty well, to the point that IMBEL decided to submit it to official Brazilian Army product (not acceptance) certification tests at the Campo de Provas da Marambaia (Marambaia Proving Grounds), in Rio de Janeiro, where it was approved.

The primary aim of the Itajubá Factory people was to employ as many FAL components as possible so as to reduce development time and eventual series production costs of their gun as much as possible. So, in 1981, the Sub Mtr 9 MD2 (solid buttstock) and the Sub Mtr 9 MD2A1 (foldable metal stock) appeared. The new experimental guns employed 90 parts (or about 80 per cent of their components) common to the FAL, with emphasis on the whole lower receiver, including the firing mechanism and the three-position fire selector. This turned them into the closed-breech weapons, which was a bonus when it came to more precise semiautomatic fire. Two lengths were available for the hard-chromed barrels (four grooves, RH rifling, pitch 1:254 mm), 160 mm (muzzle velocity: 360 m/s) and 211 mm (muzzle velocity: 400 m/s), mounted to the gun via a screw-on nut. The longer barrel was usually fitted with an external perforated sleeve and a flash hider, this having the same external dimensions of that of the FAL and, thus, allowing the fitting of the rifle’s bayonet. Although the practical usefulness of such an item to an SMG is open to question, the manufacturer stated at the time that this was actually a requirement from one of the potential costumers (apparently for guard duties), so this accessory was made available. Another visible FAL-related item was the protecting structure for the fixed (100 m) aperture rear sight. The front sight was a post well protected by large steel ears, radius being a generous 310 mm. Also coming from the rifle was the non-reciprocating cocking piece, that small variant that lies flat under spring tension when not pulled out by the operator. The Number 1 prototype of the M979, the first Fábrica de Itajubá submachine gun to employ FAL components, such as the pistol grip and trigger group, minus the firing mechanism. The blowback weapon still had the firing pin machined to the bolt head and fired from the open breech position.

The MD2A1 could be termed as the ‘compact’ variant, with its plain 160 mm barrel with no thermal sleeve or flash hider barely protruding past the mounting nut. Overall length was 680 mm, and this was reduced to 435 mm when the simple metal buttstock was folded to the right side. Empty weight without magazine was 3.2 kg. The fixed-stock MD2 with the 211 mm barrel had an overall length of 600 mm and weighed 4.2 kg without magazine. Twenty- and thirty-round magazines were available with loaded weights of 420 and 600 grams respectively, these being of the two-position feed type and featured inspection windows at the 10-, 20- and 30-round positions. As both SMGs had the same basic components, their modular design allowed, of course, that ‘hybrid’ models were configured, such as an MD2 with the shorter barrel or an MD2A1 with the longer barrel. Another option was the use of the more robust standard PARA-FAL foldable stock, though this was heavier and more expensive to manufacture.

A semiautomatic carbine version with a longer barrel (401 mm) was also made, this being intended to eventually enter the U.S. commercial market. Called the Ca 9 IMBEL MD1, it was particularly smart-looking due to its perforated thermal jacket and flash hider. The gun was 940 mm long and weighed 3.9 kg. Another viable option for law enforcement agencies that used semi-auto, pistol-caliber carbines would the fitting of the 211 mm barrel. Although the longer barrel gave a higher muzzle velocity (439 m/s) than that of the MD2’s (400 m/s), the difference in terminal velocity became smaller as the range increased, mainly so passing the 100 meters, a more than reasonable range for the caliber involved.

The widely redesigned MD2 employed about 60 per cent of parts common to (and interchangeable with) the FAL and fired with the bolt in the closed position with the rifle’s hammer/striker mechanism. Note the small cocking handle that lay flat on the left side when not in use.

Field stripping of all models was straightforward and pretty much the same as that of the FAL rifle, requiring no tools as it should be expected. After removing the magazine and checking that the chamber was unloaded, the take-down lever on the rear left side of the body was rotated down and anti-clockwise, the lower and upper receivers swinging away from each other, opening the gun. The 530 g hard-chromed bolt and the return spring, together with its guide rod, could then be slid out of the receiver. The barrel was removed from the receiver forward end by unscrewing its mounting nut; no further disassembly being required for basic cleaning/maintenance, although the two main structures could easily be fully separated by the removal of a single mounting pin.

All in all, all of these FAL-based 9x19mm weapons performed adequately and could well be placed in series production with no great efforts at IMBEL’s facilities. It just so happened that in the early 1980s the international market was already somewhat crowded with submachine gun offerings, and the eventual local orders from the armed and police forces did not seem to justify the full go-ahead for this unique and little-publicized program carried out by a bunch of creative
Brazilian designers. Comparative view of an MD1 (top) with a later MD2A1, this one fitted with a PARA-FAL foldable stock and a slightly longer (222 mm) barrel with no perforated thermal sleeve or flash hider. Its rear sight assembly, though of a different shape, also comes from the rifle. For the record, the Belgian gun also uses different, unprotected rear sights (sliding U-notch, aperture or rotating disc.) Two MD2 and MD2A1 prototypes. The gun on top has a 211 mm barrel and a perforated sleeve with no flash hider that extends past the muzzle, while the example below, using a PARA-FAL folding stock, is fitted with an a longer (222 mm) barrel with a re-shaped mounting nut. Both rear sight structures are FAL-originated. by Ronaldo Olive on 22 May, 2015.
Tags: 2015, Ronaldo Olive, V7N1, Volume 7
← Interview with Jeff Hoffman, President of Black Hills Ammunition
ORSIS T-5000: New Name in Precision Rifles →
Distributed at trade shows worldwide, Small Arms Defense Journal is a bimonthly publication that focuses on small arms, accessories, gear for the soldier, new products, industry news, and defense trade shows. The first issue of SADJ was Spring 2009, which launched at the LAAD show in Rio de Janeiro, Brazil. SADJ (pronounced “sage”) is targeted toward military, law enforcement, and defense industry professionals. Our job is to reach these groups and tailor content to their interests while producing a publication that is applicable to an international audience.