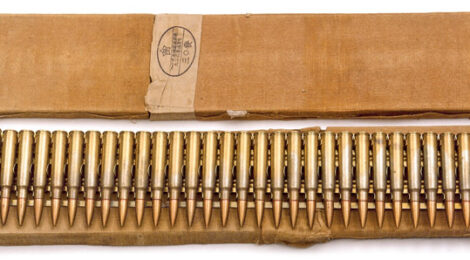 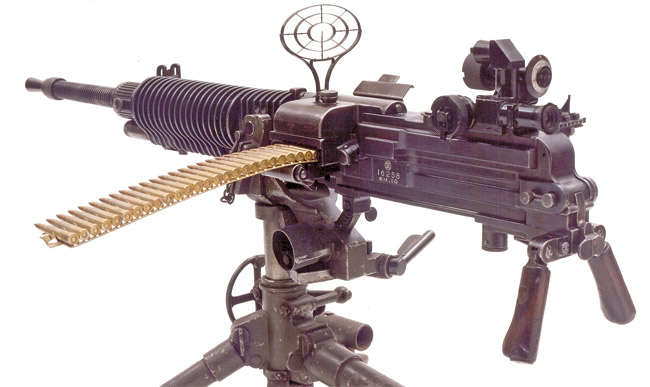 The Japanese had a unique system of naming and numbering their weapons using two basic methods.  One method referred to the Type number, which represented the last two digits of the Japanese Jimmu Year.  For the Type 92 machine gun, this represented the year 2592 (or 1932 on the Gregorian calendar).  This is noted in three Japanese kanji characters arranged in a vertical column on top of the gun’s receiver.  Another method shown in markings on the left side of the Type 92 receiver show the symbol of the manufacturer; the gun’s serial number; the Showa Era date of manufacture (the Showa Era was the period of Emperor Hirohito’s reign beginning in 1926 and ending upon his death in 1989); and the symbol of the supervising arsenal.  The manufacturer of the Type 92 example featured in this article is Tokyo Gas and Electric, the Showa Year 14.5 represents May, 1939 and the tri-petal symbol represents the Kokura Army Arsenal.

History
Long secluded, Japan began her industrialization at the end of the 19th century.  With a great deal of European advice, assistance and influence, Japan began to properly organize and equip their military.  By the beginning of the 20th century, machine guns, however, were still new and novel.  Even European advisors were unclear as to their tactical importance, thinking that machine guns were fundamentally a defensive weapon designed to counter mass frontal attacks.  But the Japanese quickly realized the potential of its offensive support capabilities and began manufacturing, under license, the French Hotchkiss Model 1897.  This gun was chambered for the 6.5x50mm semi-rimmed (Model 30) Arisaka rifle cartridge and can be easily identified by the seven doughnut cooling rings rather than the normal French manufactured five rings.  It is interesting to note that most of Japan’s European military advisors were German, and one can question as to why they chose the French Hotchkiss.  The records are not clear, but one can assume that the Japanese wanted an air-cooled machine gun and believed the Hotchkiss design to be the best, most robust and dependable that was available at that time. 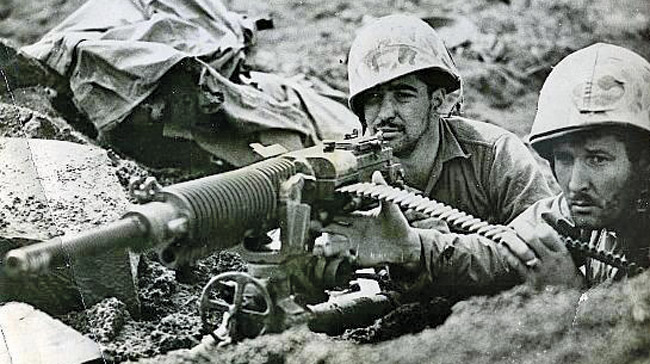 Japan soon recognized the battlefield advantages of their new heavy machine gun in the Russo-Japanese war of 1904-1905.  Machine guns were extensively used for the first time and the Japanese were the first to use it in a “modern” war, as opposed to a “colonial” war.  The Russian Far Eastern Fleet was blockaded at Port Arthur in Manchuria and the land side was heavily fortified.  The Japanese used three divisions in the attack on Port Arthur and each division had twenty-five Hotchkiss guns.  The Japanese amassed their machine guns for direct overhead fire into the strong, yet clearly visible, Russian defenses.  The resulting victory established the role of the heavy machine gun in offensive operations.

Taisho 3 (1914) Nen Shiki Kikanju
Taisho 3 refers to the year of production; in this case, the third year of the then reigning Emperor of the Taisho Era; or in the western calendar, 1914.

In 1914, Colonel Kirijo Nambu set about to upgrade the older Model 1897 Hotchkiss and again it was chambered for the 6.5x50mm semi-rimmed (Model 30) Arisaka rifle cartridge.  Though the gun was basically the French Hotchkiss Model 1914, Colonel Nambu made some changes in the bolt locking mechanism and backplate group.  He also redesigned the ejection system that copied the system used on the Lewis gun.  Additionally, because of the abrupt ejection the Taisho 3, he employed an oil reservoir and brush application system in the feed block to assure a smooth extraction of the cartridges after firing.  The Taisho 3 is easily recognized using spade grips on the rear rather than the folding pistol grips used on the later Type 92.

Type 92 (M1932) Kyuni Shiki Jukikanju
The moderately powered 6.5mm rifle cartridge was not well suited for machine guns due to the relative lack of taper causing ejection problems and its comparative lack of power.  This became evident in Japan’s conflict with China.  In 1932, (now) General Nambu began to make changes in the Taisho 3 to enhance its performance.  This upgraded version is known as the Type 92.  The Type 92 was chambered for the 7.7x58mm semi-rimmed cartridge that was based upon the British .303 cartridge.  The 7.7mm cartridge had much greater range, penetration and general destructive power over the 6.5mm and brought the gun up to its true potential.  Other improvements were made to the trigger assembly and the spade grips were replaced with a pair of folding pistol grips.  Importantly, the sights were changed.  The Type 92 had a mechanical peep sight fully adjustable for windage and elevation, whereas the Taisho 3 merely had a tangent sight with no provision for windage adjustment.  The Type 92 also had provision for the use of a variety of telescopic sights in various powers and configurations.  Other than these refinements, the Type 92 was mechanically the same gun as the Taisho 3.  Many of the Taisho 3s were arsenal rebuilt to the Type 92 configuration. 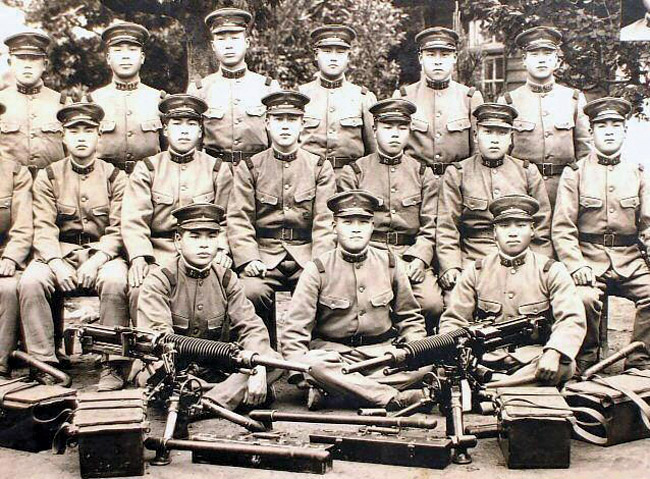 Members of the 43rd Infantry of the Imperial Japanese Army display their Taisho 3 heavy machine guns along with ammunition boxes, spare parts/tool boxes and carrying handles. The smaller caliber Taisho 3 can be easily identified by the spade grip handles.

Tokyo Gasu Denki
The Type 92 featured in this article was one of the last to be manufactured by the Tokyo Gas and Electric Company, also known as Tokyo Gasu Denki, or as TGE.  TGE was a private arms manufacturing company in Tokyo and operated under the supervision of various arsenals during its production history.  These included the Koishikawa Arsenal prior to 1935, the Tokyo Army Arsenal Number One from 1935-1936, and the Kokura Army Arsenal after 1936 until at least August of 1939 when Tokyo Gas and Electric was merged with Hitachi Seisakusho and ceased to exist as a separate entity.  Later that same year, the Type 92 was being produced by Hitachi Heiki (Hitachi Weapons Company), descendent of the parent Hitachi Seisakusho.

It is not known at this time exactly when Tokyo Gas and Electric began producing the Type 92 heavy machine gun.  Complete guns were being made in early 1935 and it is likely the first guns appeared in late 1934, with tripods and other parts being made earlier, perhaps very soon after the gun’s official adoption in 1932.  Taisho 3 heavy machine guns were already being made at TGE in 1932 and the manufacture of the Type 92 there required only a minimum of retooling and the addition of some new machinery to make the redesigned parts of the Type 92.

Serial numbers of Type 92s manufactured at TGE appear to begin at 10,000 and end in the mid-16,000s when TGE merged with Hitachi in August of 1939.  Thus, over a 7-year period, TGE produced about 6,500 Type 92s.  TGE continued production uninterrupted throughout the management transition from TGE to Hitachi and Type 92 serial numbers made by Hitachi begin where TGE serial numbers leave off.

All Tokyo Gas and Electric Type 92 heavy machine guns show high quality workmanship and careful fitting of parts.  However, the steel used in their construction tended to be soft, showing little evidence of heat treatment other than topical flame hardening of moving parts to reduce wear.  The finish of the Type 92 is a uniformly high quality rust blue.  No production shortcuts were used at any time during its manufacture by TGE.  The design of this weapon remained virtually unchanged from the beginning of its production until production ceased at the end of World War II.  The Type 92 was a durable and reliable weapon used with great effectiveness by the Imperial Japanese military forces.