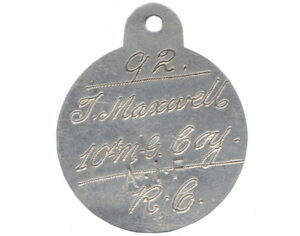 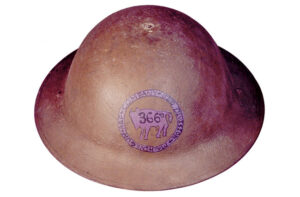 World War I U.S. M1917 helmet attributed to the 366th Machine Gun Company of the 92nd “Buffalo” Division. Purple (the color of machine gun units) and black painted circle with “Machine Gun AEF Company 92nd Division.” Inside the circle is a buffalo with 366th on the body. The 92nd Division was a segregated Negro unit that fought valiantly in the Meuse Argonne offensive and Defense Sectors. The buffalo insignia reflects the black “Buffalo Soldiers” of earlier days. 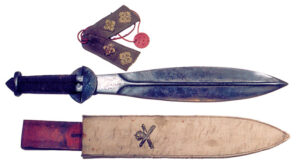 World War I Welsh battle knife privately provided by Lord Howard De Waldin, second in command and commander of the 9th Battalion Royal Welsh Fusiliers from November 1916 to December 1917. This unique battle knife was issued to trench raiding parties and Lewis machine gunners. The knife is based on the ancient Welsh Cledd sword and was designed and patented by Felix Joubert in 1917. It has an 18 inch leaf shaped blade nearly 3 inches wide at its widest point. The pommel is pointed so that it could be used as a skull-crusher. The guard is circular and could be folded flat against the blade when not in use; a feature that allowed the knife to be patented. The blade is engraved “Dros Urddas Cymru” (For the Honor of Wales) and a maker’s mark of an entwined “JO” (Joubert). The scabbard has the cap badge of the Machine Gun Corps attached to the front. This knife belonged to Welsh Machine Gun Corps Lieutenant F. Over-bate and includes his Lieutenant shoulder ranks and ID tag reading, “Lt. Over-bate, F, Wes M.G.C.”