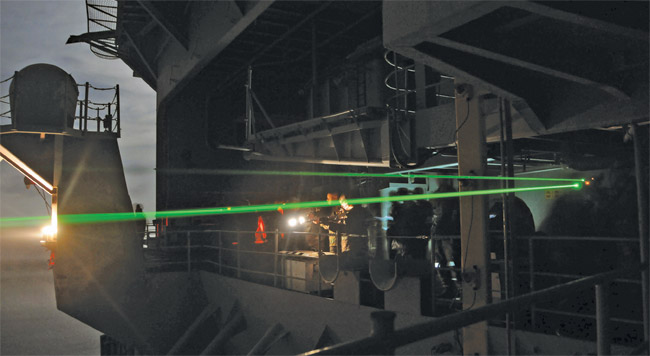 U.S. Navy security forces personnel fire a Dazzler on the fantail of the aircraft carrier USS Abraham Lincoln (CVN 72) while under way in the Indian Ocean Oct. 16, 2010. The Dazzler directed-energy weapon can be used for signaling or as a non-lethal deterrent to hostile force approaching the ship. The Abraham Lincoln Carrier Strike Group is deployed supporting maritime security operations and theater security cooperation efforts in the U.S. 5th fleet area of responsibility. (U.S. Navy photo by Mass Communication Specialist 2nd Class Luciano Marano)

As today’s computing power increases at an exponential rate, so does directed energy technology – a close relative.  Most think of directed energy in terms of visible light spectrum lasers or perhaps microwave beams, but the directed energy weapons of tomorrow may consist of a mix of many, giving them awesome effectiveness requiring countermeasures so sophisticated and/or expensive the enemy won’t attempt them.

There are a multitude of directed energy possibilities that are being considered for use as a soldier-carried battlefield anti-personnel weapon (see: www.acq.osd.mil/dsb/reports/ADA476320.pdf).  These emerging technologies all have pros and cons with respect to capability, lethality, portability, power requirements, sustainability, maintainability, cost, and legality.  Additionally, a laser weapon small enough and light enough for individual soldiers to carry quickly thresholds the Law of Physics, which universally dictates what can and can’t be achieved.

In today’s kinder and gentler war fighting environment political expectations demand less kinetic violence.  Blood and guts warfare employed in World Wars I and II, Korea and Vietnam using guns and bombs is now politically incorrect and has been renamed “kinetic action.”  The warfare environment of the future demands non-kinetic weapons, even less-than-lethal means, of subduing an enemy and that translated into a soldier-carried weapon means some sort of non-kinetic directed energy weapon.  So the national weapon laboratories like Sandia, Los Alamos and Laurence Livermore are hard at it, as are many of the university applied physics laboratories as well as private industry, all racing to develop and weaponize directed energy technologies for battlefield use.

Perhaps the place to begin is the receiving end – a “soft” (human) target.  A directed energy weapon can be used to temporarily dazzle (blind) the eyesight of the enemy without permanent retinal damage or it can be used to permanently blind the enemy.  Another can range from making him feel uncomfortably hot to outright burning his flesh like having a bucket of scalding hot cooking oil thrown on him.  Man-portable dazzling and blinding lasers (not to be confused with laser target designation) have seen battlefield use by the special operations community for over twenty years thanks to organizations like DARPA (Defense Advanced Research Agency).

In the mid-1970s there was an experimental multi-spectral dazzling laser weapon then known as “Medusa.”  Far from man-portable, it was mounted on the top of a Navy amphibious ship taking the place of one of the ship’s massive radar gun directors and was about the same size.  It was designed to temporarily blind an enemy looking seaward during an amphibious assault.  It was a huge weapon that demanded vast power resources and required everyone to wear special laser goggles to protect their eyesight.  Multi-spectral lasers vary their emission frequencies to make countermeasures more difficult and costly.  Eye goggles require a separate protective filtering lens for each frequency so if, for example, the laser spectrum varies by a range of thirty different frequencies, the protective goggles will need thirty different filter layers to protect one’s eyes from the effects and that’s costly.  The sheer number of protective goggles on all the above deck ships’ personnel, all the Marines, pilots, etc., not to mention the cost, was impractical, but Medusa did prove its concept feasibility.

A potential less-than-lethal technology being pursued today by a small privately funded firm involved with electro-muscular incapacitation induces a very select waveform into the body’s spinal cord, shutting down the individual’s Sympathetic Nervous System’s “fight and flight” ability without affecting the higher portion of the Autonomic Nervous System’s (ANS) ability to keep a person’s heart beating or one’s respiration.  Currently, physical contact is necessary to induce this waveform into the body but there is talk of using a laser to induce this wave form.  Obviously, if an attack on a particular part of the ANS is possible, they could likewise attack the part that controls the heart and breathing and with a simple click of a switch, select a stun or kill mode.  If this could be achieved using a microwave beam, a weapon such as this could be as monumental to warfare as the atomic bomb, especially if it could be adapted to wide area look down – shoot down UAV aerial delivery.

But will these exotic directed energy weapons ever become mainstream soldier-carried assault weapons replacing bullet launching (kinetic) rifles?  The short answer is that it’s unlikely for numerous reasons that include the Law of Physics, the Law of War and affordability.  All three are prohibitive for different reasons.

The Law of Physics simply can’t be violated.  Scaling a directed energy weapon for man portability has been done and patents exist.  Making it small and light is within our scientific and technical grasp.  Making an enduring power source the same still eludes our grasp and bumps up against the Law of Physics.  There’s only so much we can do capturing chemical energy (batteries) and there is no game changing technology on the horizon, to include energy foraging and piezoelectric generation, that will immediately lighten the soldiers load while at the same time increase power and duration.  Laser sophistication may contribute to a future solution by economizing power requirements, but again the Law of Physics prevails and at that point science can do little more than awe at the barrier.

The Law of War is also a stumbling block.  When it was written, directed energy was the stuff of science fiction so its use was not specifically spelled out.  However, there have been revisions like “The Protocol on Blinding Laser Weapons,” Protocol IV of the 1980 Convention on Certain Conventional Weapons, issued by the United Nations on 13 October 1995 and came into force on 30 July.  This essentially says it’s okay to shoot the enemy; you just can’t blind him or burn holes into him using directed energy.  Of course, that has never stopped anyone from special purpose use of directed energy or the anti-missile / anti-aircraft directed energy programs DoD is currently developing that could easily be employed against troops on the battlefield.  It is interesting to watch how DoD packages its development of these weapons for public and media consumption.  More interesting and never reported is the lack of legal opinion for the use or misuse of such weapons.

Affordability is also a major detractor.  The M16 costs the DoD about $225 dollars a copy.  The Colt M4 variant costs around $1,100 a copy.  These are the main assault rifles in use today.  They have common ergonomics, fundamentally operate in a similar manner requiring little variation in user training and use common ammunition that is NATO interoperable.  They are manufactured by a skilled workforce that is largely similar to those which build automobiles using non-exotic processes and materials.  A man-portable general purpose directed energy weapon will need to be able to compete with all the above.

Military-grade spotting lasers, as an example, are built using exotic manufacturing processes that require a highly skilled work force and, as a result, they are expensive.  Today’s spotting lasers are low tech compared to tomorrows directed energy weapons so logic dictates that the cost of a man-portable directed energy weapon would far exceed the cost of an assault rifle.  Therefore, it is safe to assume a one for one replacement will always be cost prohibitive no matter what the defense budget looks like.

An additional aspect, almost always overlooked, is the degree of training both operators and maintenance personnel will require.  If a directed energy weapon requires much more than marksmanship-level training or the depot-level maintenance currently in use today it will likely fail as a main battle weapon.  If it’s designated a special purpose weapon and only carried by a specially trained operator it must be assumed that its other unique requirements must be supported as well.  An example might be today’s squad automatic weapon (SAW) soldier.  Even though a soldier carrying a SAW shoots a unique weapon, anyone in his squad can pick it up and shoot it.  SAW ammo can be delinked and used in any M16/M4 or the soldiers can re-link 5.56 ammo for SAW use.  Weapon interoperability and low tech operator training is a winning combination in combat.  It is hard to imagine a man portable directed energy weapon that would offer the same user friendly qualities.

While size, weight, interoperability and lethality are factors, there are other concerns that limit directed energy weapons and they involve environmental extremes.  Today’s bullet launching assault rifles are reliable in all extremes ranging from tropical, to desert, to arctic conditions.  They work in rain, snow, dust and fog.  You can generally immerse them and they’ll still shoot given a few seconds for the water to drain.  They can be covered in mud and they shoot.  Solar flares and EMP make no difference – they still work.  A directed energy weapon relies on a sophisticated electronic circuit to generate the energy beam.  While it can be isolated and shielded from outside influence, that adds weight and another level of sophistication.  There is always some sort of lens to calumniate (focus) the beam and that, in most cases is optical.  That lens must be kept unobstructed and clean to function properly which is a difficult expectation in many environments.  Water vapor mitigates directed energy.  Clouds, fog, rain and snow are all enemies of directed energy.  Today’s powerful anti-missile airborne systems simply burn their way through, but lower energy man-portable systems won’t have that sort of sustained power and will likely be unreliable in some of these unpredictable battlefield environments.

Finally, with shrinking budgets, is pursuing man-portable directed energy weapons the path DoD should follow?  As previously discussed, it has pros and cons but whatever the next generation weapon is, it must “by law” remain NATO inter-operable and within the United Nations conventions we signed.  And that’s the real challenge.